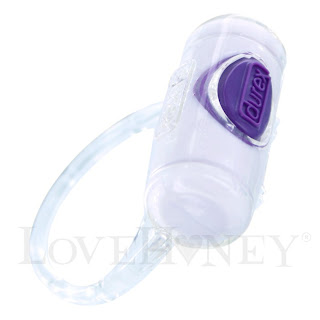 You’d think that one cock ring couldn’t be that different from another, right? In this case, definitely wrong. The Durex Play Vibrations Love Ring comes in simple but attractive packaging, and retails at around £6.99. It’s single-use only and the battery lasts for around 20 minutes.

One thing that sets it apart from many cock rings tested of late is the fact that the ring itself isn’t very stretchy. Of course, it’s plenty stretchy enough to insert a penis but not enough to give the option of being worn around the scrotum too, I suspect it would cause discomfort. So for guys who prefer to wear cock rings around the scrotum, give this one a miss.

Despite this factor, everything else was fabulous. It was noticeably more powerful than many other cock rings, without sounding like a low-flying aircraft. This results in delighting the clitoris and vibrating the entire penis – cue beaming smiles all round.

And really, there’s not much else you can say about a cock ring. It’s powerful and it works! I do think that the price is pretty steep for a single use toy, but if you’re looking for that ‘wow’ factor or you’ve never tried a cock ring before, you’d do well to start here.

Buy it from LoveHoney for £6.99: Durex Play Vibrations Love Ring – price correct at time of writing. 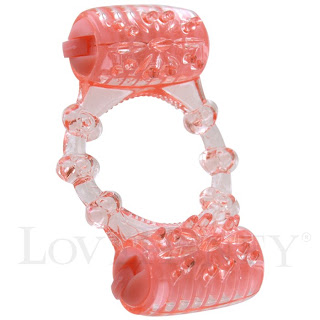 As we’d enjoyed the original [intlink id=”1347″ type=”post”]Screaming O Cock Ring[/intlink] so much, we were rather looking forward to the Screaming Two O Cock Ring. Instead of just having the one vibrating bullet, this little baby has one at the top and one at the bottom, so dependent on how the guy wears it, it will stimulate different parts.

Worn over the scrotum, the cock ring will stimulate both the woman’s clitoris and the guy’s balls and perineum, with the added bonus of vibrating the guy’s penis. Worn above the scrotum, it will give thrills to the clitoris and woman’s vagina and perineum. So it depends on how your guy wants to wear it! Of course, if it’s worn around the ball sack then it’ll likely delay his climax which may be necessary when wearing this thing!

Sadly, the cock ring is single use – that is, you can use it more than once, but when the batteries are gone, they’re gone. That’s basically the only downside. The packaging isn’t bad, it’s functional and eye-catching and use of the cock ring is self-explanatory. It’s probably a good idea to switch it on before putting it on too, as the switches are a little fiddly – NOT recommended when you’ve got lube covered fingers! The vibrations are powerful and it’s fairly quiet… that is, it just sounds like a couple of bees in the room as opposed to a whole hive. You could get away with using it if someone was in the next room, I expect.

If you like cock rings, and in particular vibrating ones – go for this. It gets a thumbs up from both of us.

Buy it from LoveHoney: click here – £7.99, price correct at time of writing 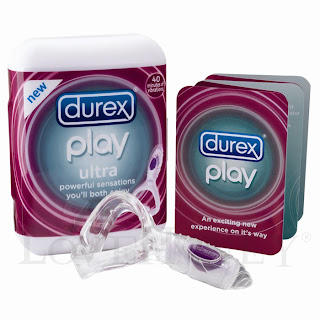 I’ve had my eye on the new Durex range for quite a while. Given they do condoms so well, I figured they’d be good at sex toys too. And as cock rings go, this isn’t bad. The Durex Play Ultra isn’t what you’d call a ‘normal’ cock ring; that is, it doesn’t form a solid ring around the penis. If you can see from the photo, it kind of ‘hooks’ around the penis.

It’s quite strange to look at, the vibrating part looks like a miniature penis and it took us a while to work out which way round it went on! There’s a little booklet inside the box with full instructions, and you’ve basically got the choice whether you want it to stimulate the woman’s clitoris or perineum. Unlike most cock rings, this doesn’t do a great deal for the fella in terms of making his climax more powerful. Obviously he’ll enjoy the vibrations but because it’s not fully surrounding the shaft, it probably won’t delay or intensify his orgasm. Basically, this toy is mainly about the woman. The battery pack included lasts for 20 minutes, and there’s a spare one included. However, you’d better hope it doesn’t run out mid-shag because it’s so fiddly to get the battery changed that you’ll both be fed up by the time you’ve got a new one in!

It does give the product extra value for money, though. You’d be a bit annoyed about spending just over a tenner on something you can use for 20 minutes. Even at 40 minutes it’s still pricey, but still good fun.

Overall, not a bad little toy. The vibrations won’t blow you away, but for women that find it easy to climax, it’s a great way to spend your money.

Price correct at time of writing. 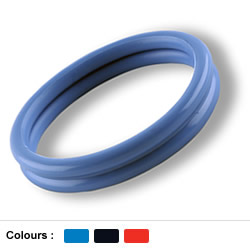