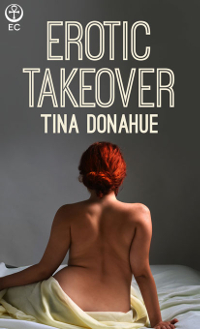 Who says he hasn’t? As laid-back as they come, Mac can’t get over how uptight Jodi is around him…like he might bite her. Not what he has in mind. Her guileless nature and voluptuous figure do dangerous things to his self-control.

Mac slung the leather strap over his shoulder and dropped the manacles on a table to the side. The lightweight metal clinked delicately in comparison to the noise of the savage music. Its harsh bass matched his pounding pulse.

He’d done it again. Without even trying, he’d run Jodi off. Every time he caught her watching him, she acted as though he was going to bite her…or maybe fire her. Was she worried about losing her job?

Mac hadn’t a clue. Since he’d been old enough to notice women, their emotions had baffled him. In middle and high school, the girls had liked how he looked and he sure as hell loved how they felt, so they’d hooked up for some good times. When those brief encounters had ended, there were endless recriminations and tears from the girls. Eventually, he’d learned to expect that. Females got pissed about nearly everything. They cried. They also survived to weep another day. 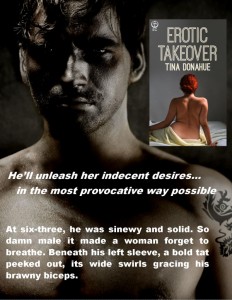 During college, he’d admittedly acted like a dog, mounting every woman who moved. No way would he get married even once or—god forbid—would he repeat his parents’ mistakes by tying the knot more than once. He was simply out for a good time and an education. Again there’d been the breakup fights. His ex-girlfriends always avoided him as they would an STD. But he’d never had a woman behave that way before he’d even touched them.

No different from a few minutes ago.

For a second, she’d surrendered within his gaze, her hazel eyes glistening with arousal. Her lips had parted in seeming anticipation of his tongue or maybe his cock. In that moment, he’d again recognized a kindred spirit. She liked naughty games. She wanted a Dom to punish her for being bad then love her until he’d drained away her doubt, replacing it with wonder and joy.

Mac liked that. He enjoyed her.

Jodi didn’t come on strong like most of the women he knew. Shit, she didn’t come on at all. She sure as hell didn’t worry about her looks, which was a relief. Mac couldn’t count the times he’d tried to have a real conversation with one of the models—discussing the craziness of a current war or the horrors of the latest workplace shooting—only to have her nod absently while she caught glimpses of herself in any reflective surface she could find.

Jodi didn’t do that. She was unbelievably levelheaded and genuine. With her, Mac sensed a man could be himself. He wouldn’t have to put on a show and prove he was more than he could ever be. Imperfect was good enough. Being simply human would suffice. Her quiet manner and intelligence not only comforted, it aroused.

I’m an award-winning, bestselling novelist in erotic, paranormal, contemporary and historical romance for Kensington, Samhain Publishing, Ellora’s Cave, Siren Publishing, Booktrope, and indie. Yay! Booklist, Publisher’s Weekly, Romantic Times and numerous online sites have praised my work, and trust me, I’m forever grateful for that. I’ve had my books reach finals in the EPIC competition, one title was named Book of the Year at a review site, and others have won awards in RWA-sponsored contests. I’m actually featured in the 2012 Novel & Short Story Writer’s Market. Talk about feeling like a freaking star. Before my writing career, I was the editor of an award–winning Midwestern newspaper and worked in Story Direction for a Hollywood production company. Outside of being an admitted and unrepentant chocoholic, I’ve flown a single-engine plane (scary stuff), rewired an old house using an electricity for dummies book, and have been known to moan like Meg Ryan in When Harry Met Sally whenever I’m eating anything Mexican or Italian. Yeah, I like to eat (burp).