A Sexy Snippet from Fangbangers

I’m continuing to highlight some of the stories I have in anthologies as they don’t usually get as much exposure (if you’ll pardon the pun) as my single-author stories. Here’s an excerpt from my story, Shattered Resistance, which appears in the Ravenous Romance anthology called Fangbangers.

Later that night Suzy crept into Dane’s room, hoping desperately that she’d left it late enough and he was asleep. There’s another couple of bullshit rumours dispelled – vampires DO sleep, and they don’t sleep in coffins. Well, they can, but it’s not necessary for survival. Besides, how could someone living in student accommodation sleep in a coffin without somebody noticing? Surely even Goths have never done that!

Dane was in bed, and he appeared to be asleep. Perfect. Suzy crept over as silently as possible. Her heart was pounding in her chest – she knew she was taking a risk, but she had no other choice. He would turn her. She loved him deeply, and just knew they’d be perfect together. Slinking closer, she cringed at every minute sound, knowing everything that if something sounded quiet to her, with Dane’s super-sensitive hearing it would be magnified tenfold. In fact, she was surprised she hadn’t woken him already.

As she stood by the side of the bed looking down on Dane, Suzy’s nerve almost gave way. He was so handsome, and yet so dangerous. Yet here she was, slinking into his room in the dead of the night to make sure she got her way. She must be nuts. Still, no backing out now. She was lucky he hadn’t heard her up until now; trying to get back out of the room undetected she might not be so lucky.

Suzy took a deep breath, knowing she had to act fast to put her plan into action before Dane awoke. She grabbed the duvet that covered him, wondering what he wore for bed, if anything. She didn’t have to wonder for long. She pulled, and revealed his body in all its naked glory. As he was lying on his back, nothing was left to the imagination. Suzy was pleased to note than even in its flaccid state, Dane’s penis was still of an impressive size. Not that she’d expected anything less – vampires were superior in every other way – it just wouldn’t make sense for him to have a small cock.

Time to make it bigger, she thought. Discarding the duvet, Suzy sat gingerly on the edge of the bed, reached for Dane’s cock and began to stroke it. As she did, she manoeuvred herself so she could reach it with her mouth. His prick began to grow tumescent beneath her fingers and she leant down and closed her lips around the tip. Continuing to caress him with her hand, she began to lick and suck at the head of his rapidly swelling shaft. She’d always enjoyed giving head and considered herself to be pretty good at it – but giving oral sex to a vampire was on a whole other level.

Dane’s breathing started to become somewhat laboured, and Suzy was unsure if he was going to wake up, or whether he thought he was just having a particularly realistic dream. She felt sure her luck would run out soon and that he’d regain consciousness and discover what was really going on. As his cock became more rigid as a result of her ministrations, she sensed he was going to come soon and smiled inwardly. Soon he’d be hers, and she’d be his. Her plan was coming together perfectly.

Dane’s cock began to pulse, a sign of his impending orgasm. She looked up at his face and was shocked to see his eyes wide open and watching her. Their eyes met, and he smiled; his incisors white, strong – and elongated. Suzy had been so intent on the job at hand that she hadn’t realised quite how turned on she’d become, until more pussy juices began to seep out and onto the already-soaked material of her panties. Surely he couldn’t turn her down now. He clearly wasn’t going to stop her at this point in time – and who knew how long he’d been awake and aware of what she was doing?

Moving her hand off his shaft, Suzy deep-throated Dane’s cock, despite its now extremely impressive size. Dane moaned loudly, no longer able to stave off his orgasm, and gasped as he shot load after load of white hot come down Suzy’s throat.

Want to find out what happens next? Grab your copy of Fangbangers here. It’s a bargain, and you get lots of other sexy stories, too!

What Are You Wearing This Halloween? 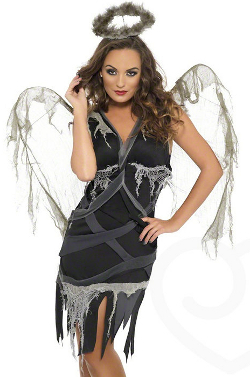 Personally, I’m lusting after this particular outfit. The Fever Dark Fallen Angel would suit me, don’t you think? 😉

It’s all sexy and cobwebby and although it doesn’t come with the halo, I still think it’s awesome.

Grab yours from Lovehoney now, and you’ll get a FREE Death by Orgasm Black Widow Spider 10 Speed Bullet. The offer is valid on some other outfits, too. Check them out here.