Who Loves a Man in Uniform? I Do! (@evernightpub) 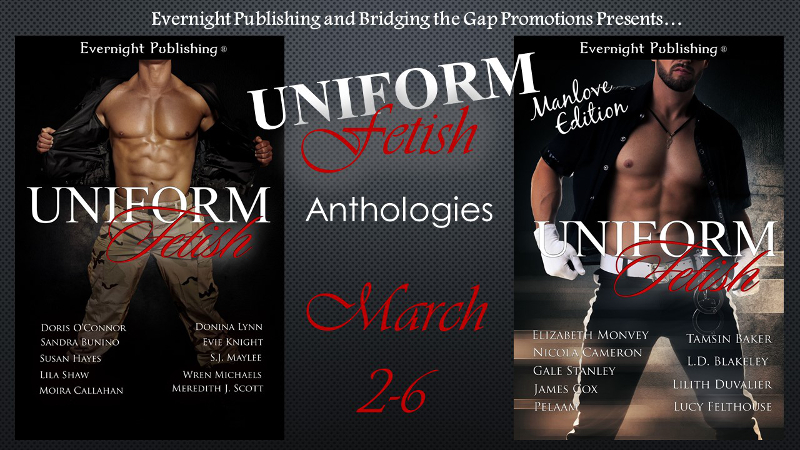 When I saw Evernight Publishing’s call for submissions for a uniform fetish anthology, I knew I had to write something for them. Regular visitors to this site, and readers of my work will know I am quite fond of men in uniform… soldiers, in particular 😉

But when it came to penning something for this call for submissions, I wanted to do something different. So I decided to write my very first fireman. And so Fired Up and my characters, Lucas Hartley and Greg Barnett, were born. They’re actually old army buddies (so yeah, I still managed to squeeze a soldier reference in there!), but drifted apart for reasons which you’ll have to read the anthology to find out, and bump into each other again years later, when Lucas arrives at Greg’s house to fit some smoke detectors. I can’t say too much without totally giving the game away, but let’s just say there was a spark (no pun intended) between them years ago, and it’s most definitely ignited in the present day. But can they overcome their old issues in order to explore the chemistry between them? Only one way to find out…

Normally Lucas would decline such offers, wanting to get his job done and get out as fast as possible—especially if he was being flirted with—but this situation was different, and not one he’d have imagined, not in a million years. After all this time he was seeing Greg Barnett again. He was in no rush to get away. Apparently Greg’s magnetism hadn’t faded over time, or as a result of his new circumstances.

“Uh, yes,” he finally said, realizing his brain had gotten carried away and he hadn’t actually replied to the question. “That would be great, thanks. Maybe a cup of tea?”

“Plenty of milk, two sugars,” added Greg, before Lucas got time to finish.

He remembered how I take my damn tea. Christ.

“That’s right, isn’t it, Lucas?” Greg grinned at him, a twinkle in his green eyes.

Nodding, and turning a smile on Violet, he said, “Yes, that’s right. If it’s not too much trouble.”

“Not at all.” Violet turned and headed through the archway Greg had first come out of when Lucas had arrived, which presumably led to the kitchen.

“So,” Lucas said, a little too brightly as he began to unpack his equipment, “other than the obvious, what have you been up to since I last saw you? You’re not married, I take it?”

Shooting a glance in the direction of the kitchen, Greg turned back to him with a glare. “No,” he said quietly, “I’m not married. Why in God’s name would I be married?”

The mood in the room had gone from jovial to glacial in the space of a couple of seconds. Feeling petulant, Lucas shrugged, “Oh, I dunno. Because it’s what people do, perhaps?”

“Not people like us,” Greg ground out, his eyes narrowed.

“Oh!” Pressing a hand theatrically to his heart, Lucas replied, “So you’re admitting it now, are you? People like us, huh? Well this is progress indeed.”

“What’s progress?” Violet asked as she came back into the room, carrying two mugs. She handed one each to Lucas and Greg, then returned for a third one, which she cradled in her hands as she looked at Lucas, still awaiting a response.

“Your brother has finally decided where he wants the detectors. He’s just as indecisive as I remember.” On the surface, the words were harmless enough, but Lucas knew that Greg would understand the subtext, which, of course, was why he’d said it. Now the shock was wearing off, the resentment was starting to seep through. It was hardly a surprise, given the number of things they’d left unsaid.

Violet was either completely unaware of the tension between the two men, or was blatantly ignoring it. “Well that’s great. Do you want to get started?”

I hope that’s whetted your appetite for more! This story, plus eight more delicious M/M uniform stories, appear in Uniform Fetish: Manlove Edition. Add it to your Goodreads shelves here.

Now make sure to enter the awesome giveaway, then click here to check out the rest of the blogs on the tour!