Thank you so much for inviting me on your blog. I’ll tell you a little about myself.

How I came to be a writer.
I longed to become a writer but this was considered rather an exotic ambition so my parents encouraged me to get an education first. No one in my family had ever stayed on for further education before, so I was elected to blaze the trail. I qualified as a primary teacher and worked for a number of years. I married in 1969 and a few years later we moved to the Lake District with our two daughters. I then ran a bookshop for ten years and secretly wrote late in the night.

Later, when I sold my bookshop, I tried anything and everything. Short stories, serials, a children’s novel, picture scripts and a few Mills & Boon contemporaries, although I gained more rejection slips than cheques. The aim was to send material out faster than it came back, which wasn’t easy. We had a brilliant postal service and all the rejections would come bouncing back with remarkable speed. But at last the day came when I sold my first short story to D.C.Thompson. It was a red letter day indeed. That was also the name of the magazine, now defunct. Following this breakthrough I seemed to develop the knack for I went on to sell many more stories. With renewed confidence I tried again for Mills & Boon, this time with a historical, Madeiran Legacy, which was accepted. I wrote five historical romances as Marion Carr for Mills & Boon which greatly taught me my craft. Only later did I have sufficient confidence to try for the mainstream fiction market, selling my first saga, Luckpenny Land, to Hodder & Stoughton in 1993 on a three book contract.

I was fortunate back in 2010 to get the rights of many of my backlist reverted from a couple of publishers. Hearing about ebooks in the US I set out to learn how to produce them, finally achieved that and regularly self-published some. Sales began quite slowly, which didn’t trouble me as I was also writing for another publisher. But once Kindles arrived in the UK in Christmas 2011, I must say my sales shot up surprisingly well and I was amazed by my success. As a consequence in 2013, I was contacted by Amazon Lake Union for an interview, then later offered a contract by them. My first book with them, The Amber Keeper, soon sold over a hundred thousand, and has now sold more. Such a thrill. Selling ebooks is now much higher for me than print books. My second book was Forgotten Women, which is also doing quite well. Now comes publication of Girls of the Great War, which I loved writing too.

This book was such fun to write, if sad and heartbreaking when Cecily lost the love of her life. She was concerned for herself, and also for her sister Merryn, who was engrossed with a young man Cecily did not approve of. He was not an easy young man. 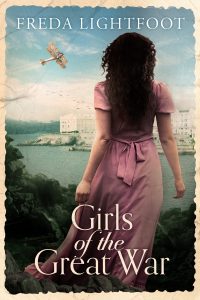 Excerpt from Girls of the Great War:

Later that afternoon Merryn eagerly hurried over to the Palace Theatre just a short distance away. The young drummer was fully engaged in rehearsal, the bandleader constantly hammering his baton to stop the musicians playing while he issued more instructions to them. She knew she would have to wait a while before he was free, so taking a seat she watched him. He was a cheerful young man with reddish hair, soft grey eyes that were constantly alight behind his spectacles, a slightly gap-toothed smile and a chiselled chin. Being a bit of a joker, Johnny Wilcox was great fun. When finally he was allowed a break, Merryn offered to buy him an afternoon tea at a nearby café.

‘There’s something I’d like to discuss with you over a little tiffin,’ she said with a smile.

‘That sounds good,’ he grinned, his expression filled with curiosity.

As they sat enjoying tea and biscuits, Merryn told him of her sister’s plan to create a small concert party and entertain the troops in France.

He looked a little taken aback. ‘Blimey, that’ll be a challenge. I wouldn’t want anything dreadful to happen to either of you two girls.’

‘I don’t think we’ll be anywhere near the front line where the fighting is going on. We just plan to entertain the soldiers at their bases. I know you appreciated how Cecily discovered her talent to sing. Oh, and by the way, I can play an accordion.’

He gave another wide grin. ‘What a brick you are, a real sport. As you know, I play drums and cymbals, so can I come too?’

Merryn blinked in surprise, amazed by this instant offer, having fully expected she’d need to persuade him. ‘You most certainly can. I was about to ask if you’d be interested, as we’d welcome your support. I doubt there’ll be any wages paid since we’ll be volunteers fed and accommodated by the army.’

He creased his lips into a pout then gave a little smirk. ‘I’ll do my best to accept that fact. You’re a girl with great talent, as is Cecily. I’d love to work with you both.’

The weather being sunny he walked with her to the beach, talking about the music they loved to play and how long it had taken each of them to learn these skills. ‘I’ve been playing drums all my life, ever since Dad bought me one for Christmas when I was ten. It kept me sane when I was suffering his loss.’

‘Oh, how dreadful. How did that happen? I know very little about your past.’

‘I was born in Barnsley in Yorkshire; part of a working class family who became even poorer after Dad was tragically killed in a mining accident. Such bloody bad luck. Following his death my mam worked as a cleaner, earning barely enough money to feed her six children, all of them younger than me. I eventually was able to help by getting myself a job playing my drum kit at a local pub. I was so thrilled with Dad’s present that I was determined to improve it and learn how to play well. Thankfully I succeeded.’

‘Good for you, Johnny, I’m glad to hear that. My father sadly drowned in the Thames when we were quite young, although how that happened has never been explained to us and we have little memory of him. Queenie refuses to say anything on the subject, not even explain why her marriage went wrong.’

‘My mam didn’t talk much about her early life either. Far too distressing for her.’

Merryn decided that they had a great deal in common and could be well suited to work together, both being musicians. ‘I’m delighted to hear that you wish to join our team.’

‘Why would I not, when you’re so attractive?’

Merryn rolled her eyes in amusement, having no belief in her own looks. She saw herself as quite plain, a little too round and simply practical, interested mainly in fashion, sewing, make-up and hairstyles. Cecily had always been the pretty one with talent and plenty of young men falling for her, whereas she’d never found a boy who really took a shine to her. Merryn adored her sister and felt quite proud of her famous mother too, readily willing to deal with Queenie’s problems. His next words startled her out of those thoughts.

‘Can I give you a little kiss of thanks,’ Johnny murmured.

‘I’m not sure that would be a good idea,’ she stuttered. He was a most pleasant young man, if a little flirtatious.

‘I must confess that I’ve always felt the need for more closeness between us.’ Taking hold of her hand he gave it a gentle little kiss.

Blurb
Cecily Hanson longs to live life on her own terms—to leave the shadow of her overbearing mother and marry her childhood sweetheart once he returns from the Great War. But when her fiancé is lost at sea, this future is shattered. Looking for meaning again, she decides to perform for the troops in France.

Life on the front line is both rewarding and terrifying, and Cecily soon finds herself more involved—and more in danger—than she ever thought possible. And her family has followed her to France. Her sister, Merryn, has fallen for a young drummer whose charm hides a dark side, while their mother, Queenie—a faded star of the stage tormented by her own secret heartache—seems set on a path of self-destruction.

As the war draws to a close and their hopes turn once again to the future, Cecily and Merryn are more determined than ever to unravel the truth about their mother’s past: what has she been hiding from them—and why? 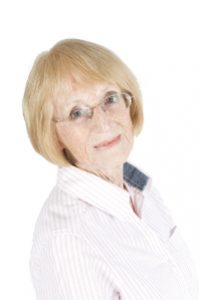 My Biog
I was born in a small mill town in Lancashire. My mother comes from generations of weavers, and my father was a shoe-repairer. I still remember the first pair of clogs he made for me. After several years of teaching, I opened a bookshop in Kendal, Cumbria. And while living in the rural Lakeland Fells, rearing sheep and hens, I turned to writing. I wrote over fifty articles and short stories for magazines such as My Weekly and Woman’s Realm, before finding my vocation as a novelist and became a Sunday Times Bestselling author. I’ve now written over forty-eight novels, mostly sagas and historical fiction, my three latest books, including Girls of the Great War, out in May are published by Amazon Lake Union. I spend warm winters living in Spain, and the rainy summers in Britain.

If you wish to be kept up to date on new titles and contests, sign up on my website http://www.fredalightfoot.co.uk  to subscribe to my Newsletter: I only send out 4 or 5 a year so your inbox won’t be flooded.

Make sure to follow the whole tour—the more posts you visit throughout, the more chances you’ll get to enter the giveaway. The tour dates are here:  http://writermarketing.co.uk/prpromotion/blog-tours/currently-on-tour/freda-lightfoot-3/