Thanks so much for having me on your blog with my new release Gabe’s Revenge. This is book two in my series McLeod Security and a lot darker and longer than the first book. You’ll meet some familiar characters from book one in the series, but don’t worry. There are no spoilers, so the series can be read out of order. 🙂

Gabe and Lissa took me on quite the journey when I was writing their story, so hold on tight, as they find their way to their Happy Ever After. 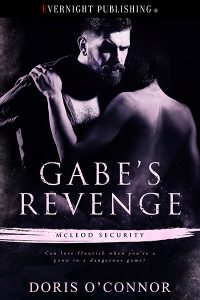 Gabriel Henshaw is nothing but a monster—a ruthless killer—that’s what Lissa Andrini has always been told. Sold to the man by her own father, she fears for her life, yet she can’t help the insane pull she feels to him. It has to be some form of Stockholm syndrome, surely? It couldn’t possibly be the effect of his Dominant nature effortlessly pulling her under his spell and awakening her latent submissive side.

Beating Andrini to a bloody pulp soothes Gabe’s rage temporarily, but that leaves his daughter. Were it not for a promise to her mother, he’d refuse this payment, not least because Lissa Andrini awakens all of his protective and carnal instincts. The perfect counterfoil for his darker needs and desires, she has the power to bring him to his knees.

Can love flourish when you’re a pawn in a dangerous game?

The snarky intonation she put on that title, while she yanked her chin up and did her best to stare him down, should have made him do good on his promise to put her over his knee. However, the slight wobble in her bottom lip, coupled with the way every delectable curve of her body was pressed into his frame, meant any such action would be a very bad idea indeed. He wouldn’t be able to keep his hands off of her, and he didn’t want her first time to be angry sex. She deserved better than that.

Her eyes grew wide, her already fast breaths sped up even more, and Gabe swallowed a groan. He let go of her and stepped back for some much-needed breathing space. As it was his cock was trying his hardest to break out the confines of the denim surrounding it. Gabe couldn’t even remember the last time he wanted a woman this damn much.

“So, you’re going to add rape to your rap sheet. Murdering innocent women wasn’t enough for you?”

A gasp from behind them alerted Gabe to Mavis’s presence, and sure enough when he turned his head it was to see her standing there. Hands pushed into the pockets of her ever-present apron her lips were pressed into a fine line, signaling her disapproval.

“Parkinson is here, Gabe,” she said.

She nodded, glanced at Lissandra and shook her head.

“Tell her the truth, Gabe, all of it. Or this will never work.”

With that, she turned and left them alone on the terrace.

Lissandra tried to get past him, but he stepped in her way.

“Lissa, don’t.” She pushed against his chest in a vain effort to make him move and then glared up at him.

“Don’t you dare call me that. Only Mama ever called me that. Don’t you fucking dare…” She slammed her hand over her mouth and shook her head. Misery and despair rolled off of her in waves, and Gabe had to fight the urge to take her in his arms. She wouldn’t welcome that move right now, if ever, and now was not the time.

Instead he crossed his arms over his chest, widened his stance, and simply looked at her.

“I’ll call you anything I damn well, please, little girl, and you will lose the attitude. I told you last night, you’re mine now, so you better get used to it. As for Mavis, she is the most loyal person I ever met. Without her, I doubt I would have survived my childhood, so you be nice to her, do you hear me?”

“Or what? You’ll kill me, too?” The mumbled reply grated, and he took several deep breaths to calm himself.

“If I wanted you dead, you’d be six feet under already, girl. After the hit on your father went wrong, I’ve never trusted anyone else to do the killing for me ever again.” He waited for that to sink in, and sure enough her head came up, and she stared wide-eyed, confusion evident on her face.

“No, little girl. I’m not such a bastard that I would rob a child of its mother, especially when that mother’s only crime was falling in love and staying with that fucker, Andrini. Besides, I prefer to kill with my hands. Much more satisfying.” He uncrossed his arms and wrapped his hands around her slender throat. Her heartbeat jumped under his palms, and he squeezed just once before he released her. “To feel the life draining out a piece of scum that crossed me … that’s sweet.”

“You’re a monster.” Her whispered reply made him grin.

“Yes, I suppose I am. You better get used to it, little girl, and don’t get any silly ideas of crossing me. You behave and do as you’re told, and we’ll get along just fine.”

She swallowed hard, but gave the tiniest nod, and that would have to do for now.

“So, you’ll kill me if I don’t behave?”  She mimed quotation marks around that one word and nudged her chin up in a move of defiance that simply served to make him harder. It would be fun to tame all that passion, indeed, and knowing that he would be the first man ever to touch her, to teach her … fuck, what a turn-on that was. Gabe had never cared much about being the first. He wasn’t possessive over the women he fucked. That would mean he cared about them to be anything more than a convenient set of holes to sink his dick into, but this was Lissandra Andrini. His revenge and he was fast beginning to realize his destiny, too. Whether she’d also prove to be his downfall remained to be seen.

“Killing is too easy an out. That’s the only reason Andrini still lives. I want him to suffer, to wallow in his own filth. Death is too good for the likes of him. As for you…” He paused and smiled. “I’ve already told you what I’ll do to you. And once that ass of yours is red raw I will fuck it, so, maybe I’ll kill you after all with the petit mort, at least.”

Her sharp intake of breath almost sounded like a moan, and acting on instinct, he stepped closer, and shoved his hand under her robe to cup her mound. Wet heat greeted his palm, and he smirked, while a blush suffused her pale skin.

“What are you? You can’t … oh…” She tried to clamp her legs together, but one shake of his head stopped her. He forced himself to remove his hand, looked at the glistening evidence of her arousal on his palm and held it up for her to see.

“Protest all you want, Lissa. Hate me if you must, but your body doesn’t lie.” He licked the wetness off his hands and immediately regretted that, as her feminine musk hit his nostrils. Damn, she smelled good.

“I do, I hate you.” Her denial was too breathy to be truly effective, and Gabe laughed.

“No problem, my sweet. You don’t have to like me to enjoy fucking me. Now, go and get dressed, and meet me in the living room in ten minutes. Don’t make me wait, or so help me I drag you out there like this or maybe naked.” He grinned at her simmering outrage. “I’m sure my men would enjoy the view.”

Gabe threw his head back and laughed. 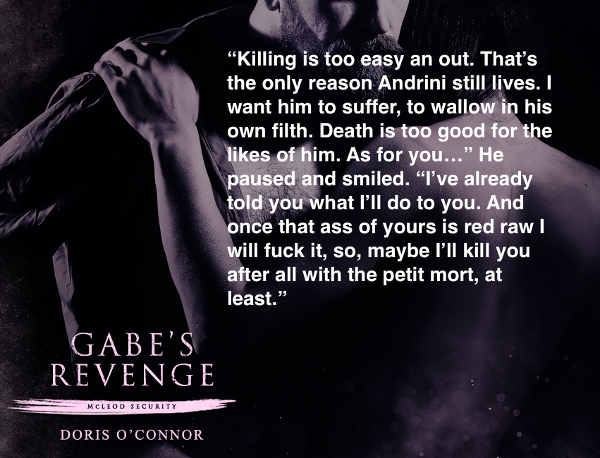 Stalk her in these places