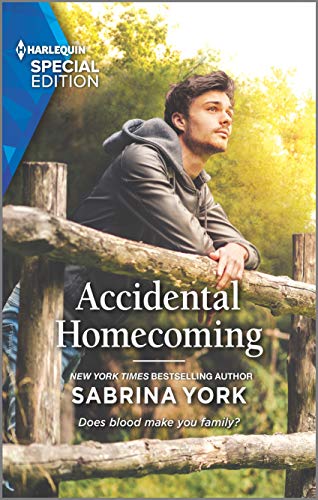 Danny Diem’s life is upended when he inherits a small-town ranch. But learning he has a daughter in need of lifesaving surgery is his biggest shock yet. He’d never gotten over telling his ex Lizzie Michaels that he wasn’t the marrying kind. But her loving strength for their little girl tugs at his heartstrings—and makes him wonder if he’s ready to embrace the role he’s always run from: father.

He broke the silence with four sharp words. “Why are you here?”

“Why don’t you sit down?” She did so herself, sliding into the banquette of his booth—her knees were about to give in, anyway.

He ignored her request. “Why are you here?”

“Danny, this is hard enough, and you’re not making it any easier for me—”

“Oh, I’m not making it easier for you? You’re the one who left me. No warning. Nothing. Just…gone. Poof.”

Irritation bubbled, and though she’d told herself she wouldn’t allow her anger to surface, she couldn’t help snapping, “There was plenty of warning. You weren’t paying attention.”

“Really? I was sure paying attention during our last fight. I remember that pretty clearly.”

“Do you? Do you remember what we fought about?”

His face went blank and he dropped into his seat, where he could face her, but not come too close. As though he were protecting himself from her.

What a laugh. She was the one who needed protecting. He was far too addictive for her own good.

“Why don’t you tell me what you remember?” he suggested.

She sighed. “We’d been talking about the future.”

“Ah, yes.” He settled back into his seat, his expression still mutinous.

“And you freaked out.”

He frowned. “I did not freak out.”

“You made it pretty clear we had no future together.”

“I didn’t say that. I just said I didn’t want marriage.”

“And can you blame me? With parents like mine? What kind of father would I be?”

That comment hit her like a blow. Stole her breath. Made her question her own sanity for coming here.

“And my mother?” he continued harshly. “Did Darla tell you what my mother has done now?”

“She said she skipped bail.”

He barked a bitter laugh. “Skipped bail, then skipped town. But before she disappeared, she cleaned out my bank accounts, and my apartment. She hocked everything I own. Everything I’ve worked for.”

Anger raged in Lizzie’s heart. The woman truly had no moral compass.

“You’re not like your mother.” She’d told him that a thousand times, but too many years raised by that horrible woman had clouded his self-image.

“And then, there’s the father. The man who wanted nothing to do with me. The man who wouldn’t even acknowledge my existence. He certainly didn’t support us.”

He shook his head and scrubbed his face with his palms. “It doesn’t matter. None of that matters. Not anymore.” She hated his expression, the resignation and the pain. “So, why are you here?” The question again, this time, whispered.

She might as well just dive in. “I…need your help.”

He frowned again. “What do you want?”

Her heart stuttered. Oh, Lord. Now that the time was here, she didn’t know what to say. Or how to say it. Or anything.

Danny waited, silently, watching her. Then his lips tweaked into a hint of a sad smile. “You’re procrastinating, Lizzie. You never procrastinate unless it’s something bad.”

Her expression must have given something away because he paled.

She shook her head. “I’m fine. And no. It’s not bad. Not bad at all. Well, not all bad. There is some bad, I suppose. But it’s…” She trailed off. She was babbling—she knew she was. It was yet another way she avoided unpleasant topics.

Danny pinned her with a sharp look. “What is it you want to tell me?”

She wrinkled her nose. “About that last fight had—””

“What about it?” His tone was tight, as though the words were bitter on his tongue.

Right. “The one where you told me you didn’t want marriage or children.” She tried not to sound bitter as well, but failed.

“For good reason,” he snapped.

“Right,” she snapped right back. Then she met his gaze as bravely as she could. “Well, I was pregnant.”