Book One – Woman of Power 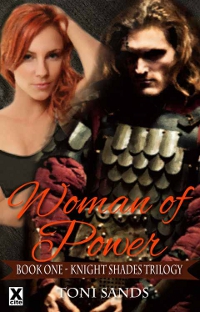 When Xcite Books asked me to write a trilogy about knights, the colourful images tantalising me probably chime with the historical and mythological references we absorb from childhood onwards. I’ve enjoyed writing erotic romance set in 1830 Wales (Traded Innocence) also 1900 London (Orchid Pink) but this time I wanted to aim for something different. There have been many versions of the Arthurian legend and of course the BBC’s Merlin has fuelled our fantasies, although I haven’t seen too many episodes. Maybe that’s a good thing because my own ‘hot knight’ rode into my consciousness and as I write this, he’s still there, waiting for me to catch up with him in Book Three. His journey is a bumpy ride in more ways than one but he’s up for whatever challenge faces him and he values the comradeship of his fellow knights.

There are some highly erotic scenes. Sometimes the action’s explicit. Sometimes it’s happening more in the head rather than playing out on the page. There are scenes between gorgeous girls and fit guys laced with a little humour and whimsy. Research reveals how the homoerotic element would have been much in evidence and this led to a steamy episode in the knights’ bathhouse. The M/M element is there for a purpose because I want my characters to behave as history tells us, while still speaking to us as if they were modern athletes, soldiers and singers – footballers’ wives or women for whom glass ceilings are there to be smashed. Writing’s all about challenges and for me, this latest project is a chance to try a new take on knights in armour, jousting, fencing and gaining the favour of one particular lady.

Woman of Power begins with Gavin crossing a portal into another world. He’s manipulated by an enchantress who guides him towards a brotherhood of knights living in a raspberry stone castle. On the way, he meets a beautiful woman who conceals her true identity. Gavin finds his emotions in turmoil when he discovers just what a dangerous path he treads. The story is a mix of magic and medieval references, with contemporary language and mindset. No one cries ‘gadzooks’ but there’s plenty of banter among the boys as Gavin enters their midst and strives to behave as a gentle knight should do. Hmm … this doesn’t always happen as planned.

In his defence, my knight was returning from a battle zone when the enchantress picked him up in her crystal ball. The girl he left behind in his own world is well out of reach – he’s susceptible to temptation and there’s plenty of that in this larger than life world. I should also mention Gavin’s trusty steed, Sarum who’s partial to a pretty filly. As for the camp knight … pageboys beware!

I hope you’ll read and enjoy Woman of Power and go on to complete the treble. The title of the next book in the trilogy is Wicked Woman, scheduled for December release. Please come and say hi on Facebook or Twitter and let me know if you like my hot knights! 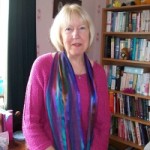 Available from:
Amazon UK
Amazon US
(Coming to all other good eBook retailers in 2013)