When Polly reluctantly agrees, she’s swept into a world of lesbianism and BDSM—perhaps even love.

Here’s an excerpt from the first in the Honkytonk Angels series, Fall to Pieces:

“I will tell you everything you need to know. No need to ask.” Vivien’s tone was completely businesslike. “Step inside. Take off all your clothes. All of them. Then come back out here, kneel on the carpet and wait for me.”

Liquid dampened Polly’s panties. As she crossed the entry to the dressing room, an out-of-control mix of anticipation, dread and excitement fired through her body awakening every nerve ending. Every muscle and tendon. Every inch of her skin.

She glanced into Vivien’s eyes, hoping to find a smidgeon of humor, lust, anything, but that beautiful face was as devoid of emotion as a mannequin. Polly wondered how she could feel so much while Vivien didn’t seem affected in the least.

A click of metal and the door was locked. The lights dimmed.

The interior door closed and Polly realized Vivien had left the entry hall. Polly stepped out of her shorts and hung them on the hook. Though the garment hadn’t covered her legs, she felt exposed without them. She slipped her striped shirt off over her head, hung it alongside the shorts and then reached behind to undo her bra.

She’d thought maybe Vivien would at least let her keep her underwear on, so she’d worn a cute matching set she’d bought at the Bettie Page store. Her nipples grew diamond-hard as soon as she was free of the vintage-inspired bra.

When she pulled down her panties, she realized her pussy was drenched with wetness. Damn! Vivien hadn’t done anything but mindfuck her so far.

Peeping out of the curtain, Polly made sure she was alone before venturing out. All the things she’d agreed she was willing to try filtered through her thoughts. Nipple clamps. Butt plugs. Collars. Restraints. Blindfolds.

She shouldn’t have had that glass of wine before going through the checklist last night.

The foyer was now dark and shadowy. The red glow of a soft spotlight marked the place where she’d been instructed to kneel. Inhaling, Polly went to the spot and sank down on her knees.

A sense of sweet shame filled her at the knowledge she was naked and waiting for Ma’am. Expectant, she watched the door, her mouth dry as cotton, her body humming with desire.

All coherent thought—the normal chatter in her mind—drifted away as this situation transported her to another realm.

A realm where she wanted and needed Vivien to ravage her.

Finally, the knob turned and the hinges sang as the door swung open. Polly’s spine straightened. Her heart fluttered. She’d never dreamed she of all people would be so eager to submit. 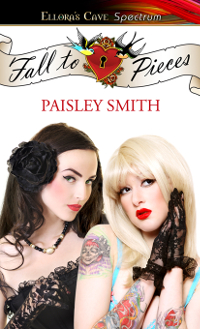 About Fall to Pieces:

The pretty songbird obeys Vivien’s illicit commands with a vulnerability that chips away at the seasoned Domme’s icy exterior. But Vivien has been hurt before. And she’s resolved never to let another sub into her heart.

From their first encounter Polly enjoys every decadent punishment Vivien metes out, but the long, lust-filled sessions in Vivien’s dungeon leave Polly wanting more than just spankings from her seductive Mistress. She wants love. And she’ll do anything—anything—to get it.

Paisley Smith is a full time author who can usually be found in front of her computer either writing, chatting, promoting or plotting. It’s a glamorous life…working in one’s pajamas.

She attended college in the Deep South where she obtained a slew of totally useless degrees and developed an unrelenting sense of humor.