The Other Side: Book #1 in the Island Girls Trilogy by Zee Monodee 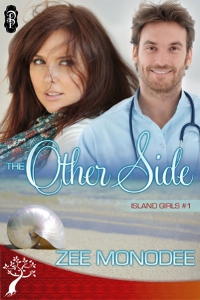 Divorce paints a scarlet letter on her back when she returns to the culture-driven society of Mauritius. This same spotlight shines as a beacon of hope for the man who never stopped loving her. Can the second time around be the right one for these former teenage sweethearts?

Indian-origin Lara Reddy left London after her husband dumps her for a more accommodating uterus—at least, that’s what his desertion feels like. Bumping into him and his pregnant new missus doesn’t help matters any, and she thus jumps on a prestigious job offer. The kicker? The job is in Mauritius, the homeland of her parents, and a society she ran away from over a decade earlier.

But once there, Lara has no escape. Not from the gossip, the contempt, the harassing matchmaking…and certainly not from the man she hoped never to meet again. The boy she’d loved and lost—white Mauritian native, Eric Marivaux.

Back when they were teens, Eric left her, and Lara vowed she’d never let herself be hurt again. Today, they are both adults, and facing the same crossroads they’d stood at so many years earlier.

Lara now stands on the other side of Mauritian society. Will this be the impetus she needs to take a chance on Eric and love again?

She shouldn’t have come. The sound of her mother’s high-pitched voice crept over the din, asking if someone had heard a car stop in the driveway. They’d come out in the next minute.

Picking up her courage, and wishing it were Dutch courage despite her not being a drinker, she tore her fingers and head from the wheel and threw the door open. Lara peeled herself out of the vehicle at the same time a chorus of gasps resounded in the garden.

All three older women were over her like a bad rash. Hugging and kissing her cheeks, holding her face in their hands while they exclaimed how beautiful she had become. All of which were simply tactics to lull her into complacency for when they’d really pounce on the meaty topic—her divorce.

With their deceptively frail-looking hands on her shoulders, they pushed her toward the back door to the kitchen. A memory of being pushed around in the same way toward the altar on her wedding day, the glittery gold and red veil over her eyes, assaulted her. She stopped in her tracks, the pain coming in from nowhere to slice through her heart. The biddies must not have noticed her stilling; they simply continued to steer her inside until she was seated at the table. A plate of towering hot bhadias appeared in front her, along with a bowl of satini cotomili, the coriander, tomato, and chili paste-like dip Mauritians ate with all their fried foods.

Auntie Ruby, resident gossipmonger, lived up to her reputation. She had been the first to mention Lara’s failed marriage before they made it back into the house.

The sound of the grating voice droned on, Lara choosing to ignore it, before her mother gave her a small slap on her shoulder.

“You wicked girl. You said you were coming on Monday, and here you are surprising us now.”

She sighed. This was code for “how could you have kept this a secret and made me lose face in front of everyone, when I’ve been telling them you are coming on Monday?” Her mother lived for hearsay and the general idea of “what will people say.” In fact, most people in Mauritius lived by the standard. Whoever said the ton and all its silly rules had died in the Regency era had not taken a trip to Mauritius, in eighteen-ten or the year two thousand.

“But my poor little girl,” Auntie Ruby said in a cajoling tone bringing nothing but danger to mind. “Of course you wanted to come home earlier. Who wouldn’t? Look what that awful, awful man has done to you.”

Translation: “And here’s your cue to air out the laundry, from the sheets to the knickers, you silly goose.”

“Our hearts went out to you, dearest girl, you who are like a daughter to us,” Auntie Zubeida chimed in. “We never saw this coming. How could you not have told a soul you and that scoundrel were having problems? We would’ve spoken to him, set him right, showed him this is not how he is supposed to treat our daughter.”

“Tsk-tsk. And what a beautiful couple you two made. How could anyone have thought you would break up?” Auntie Ruby added.

Lara forced a small smile. Damn, how she wanted to be out of here. She had a duty to do, though—the sooner she was done, the better, so she could run back to Grand Baie and leave those old cows behind. And yes, in that lot, she included her mother, who had yet to speak out. Bad vibe.

All three women watched her with narrowed eyes. No way was she doing away with the Inquisition.

“How can you be fine?” Auntie Ruby asked. “We have been so preoccupied with your plight. How on earth are you going to get along? How will your parents bear all this? To think they still have an unmarried daughter on their hands, now they are ending up with two daughters. Oh what fate God has dealt them.”

Lara bit her lip to keep from answering back. Right, the ton must’ve been more solicitous than this. The aunts were simply nosing for gossip. But then, that’s what Jane Austen wrote in her subtext, too. The concern was merely the polite way of enquiring about gossip in their society.

– The Other Side is Zee’s first-ever penned novel, written in the year 2005, when she was diagnosed with breast cancer and thus decided to live her dream of writing a book. She drafted this book mostly during sleepless nights between chemotherapy sessions, the outpouring of this tale becoming her therapy to cope with her treatments.

– The book trailer features images of locations mentioned in the story. The second image, at 0.08, is of the Grand Baie beach, where Lara lives. At 0.58 is the Swami Vivekananda International Conventions Centre located inland in Pailles, that Zee used as the inspiration for the centre Lara manages in Grand Baie. 2.09 features the Coin de Mire Island, a visual that can be admired from the terrace of Eric’s residence in Cap Malheureux.

Stories about love, life, relationships… in a melting-pot of culture

Zee is an author who grew up on a fence – on one side there was modernity and the global world, on the other there was culture and traditions. Putting up with the culture for half of her life, one day she decided she’d stand tall on her wall and dip toes every now and then into both sides of her non-conventional upbringing.

From this resolution spanned a world of adaptation and learning to live on said wall. The realization also came that many other young women of the world were on their own fence.

This particular position became her favorite when she decided to pursue her lifelong dream of writing – her heroines all sit ‘on a fence’, whether cultural or societal, in today’s world or in times past, and face dilemmas about life and love.

Hailing from the multicultural island of Mauritius, Zee is a degree holder in Communications Science. She is a head-over-heels wife, in-over-her-head mum to a tween son, best-buddy-stepmum to a teenage lad, an incompetent domestic goddess, eternal dreamer, and an absolute, shameless bookholic. When she isn’t penning more stories and/or managing the Ubuntu line at Decadent Publishing, you can bet you’ll find her with her nose in her tablet, ‘drinking in’ a good book.