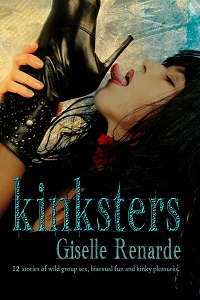 Kinky couples are great, but nothing beats a big group of kinksters!

In this anthology by kinky queer Canadian Giselle Renarde, a Domme and sub share their anal fetish with an old friend while a sword collector pays five young men to fulfill her sex swing fantasy. Geeky grad students chase tornadoes and tail while an unapologetic cougar gets licked by three college girls. There’s an all-girl waxing session, a vintage clothing enthusiast who’s shocked to discover her lover’s “other woman” is actually a man, and a bureaucrat whose male escorts happen to be angels. To top it all, a room full of lesbians lose it over a tattooed femme in Lesbukake. All this, and so much more!

Twelve sexy stories are ready and waiting. On your mark… get set… KINK!

Excerpt (from The Other Other Woman):

Michael swallowed hard. Sipping his G&T, he looked off in the direction Garret had gone.  They both did.  There was no sign of him.

“Garret gets nervous, at times.  It isn’t insensitivity, it’s only that he doesn’t know quite what to say.”  Michael took another sip, then set down his glass and turned it counter-clockwise.  “Garret and I worked very, very closely at one time.  I don’t know if he mentioned I’m his assistant at the office.”

“He didn’t mention anything,” Edith replied, trying not to snap at him.  It was Garret she was upset with, leaving her alone with a stranger.

“Don’t be too hard on Garret.  He’s one of the gentlest, loveliest men I’ve ever known.”

As Edith pondered the guy’s blond curls and boyish good looks, an image took her from behind: an image of his cherubic pink lips against Garret’s, of his manicured hands unbuttoning Garret’s pressed white shirt.

Edith gasped.  “You’re the other other woman!”

“Something like that,” he replied, with a forlorn grin.  “You’re disappointed.”

“That bastard!”  Edith smacked her hand against the table with such force a bolt of pain shot through her fingers.  “I can’t believe he lied to me.”

“Well, I assumed he’d had an affair with another woman, and he didn’t correct me.”  She massaged the pang from her knuckles.  “Don’t you think he should have told me I was wrong?  Now I feel like a complete idiot.”

“You mustn’t feel that way.” Michael touched his fingertips to hers.  “You’re quite right—he should have advised you what to expect.  Don’t be too hard on him, though.  He’s only trying to give you what you asked for.”

“This is nowhere near what I asked for,” Edith snapped.  When Michael’s expression dropped, she immediately regretted her harsh tone.  “I’m sorry.  It’s not you.”  His eyes welled with tears, so she broke down a bit. “Tell me something about you and Garret.  What was it like between you two?”

Giselle Renarde is a queer Canadian, avid volunteer, and contributor to more than 100 short story anthologies, including Best Women’s Erotica, Best Lesbian Erotica, Best Bondage Erotica, and Best Lesbian Romance. Ms Renarde has written dozens of juicy books, including Anonymous, Ondine, and Nanny State. Her book The Red Satin Collection won Best Transgender Romance in the 2012 Rainbow Awards. Giselle lives across from a park with two bilingual cats who sleep on her head.