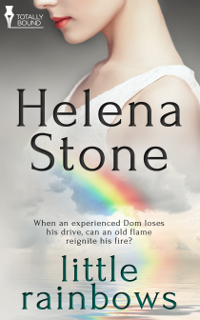 Thank you for welcoming me on your blog today, Lucy. I’m delighted to spend one day during my release party for Little Rainbows with you and your followers.

And talking about parties; everybody loves a good party – right? Well, maybe not.

I’m not quite sure what possessed me when I decided to make Heather – my female protagonist – a party planner. If there are people less equipped to write about parties than me, I’ve yet to meet them. To say I’m not overly fond of parties would be a gross understatement. I’m no good in crowds. A large number people gathered together – especially in a confined space – makes me feel claustrophobic.  I’m okay if I know most, if not all, the people I’m with. Throw me in the middle of a group of strangers and I’ll do my very best to become invisible.

I envy people who can walk up to strangers and kick start a conversation about just about any subject. For some reason I never learned how to do that, or maybe it’s a gift I wasn’t granted – I don’t know. All I do know is that being an introvert, somewhat insecure, and more than a little bit shy, means that parties aren’t always a fun experience for me.

On the other hand, because I’m lousy at mixing with people, I tend to keep busy during parties. I’ll happily supply people with drinks, make sure there’s enough nibbles to keep everybody from getting hungry, and pick the right music to reflect the mood surrounding me.

So maybe making Heather a party planner was not as farfetched as it seemed at first glance. Having lost her husband eighteen months ago, Heather has no interest in attending parties either. Resurrecting the party planning business she’d made a success with her late husband, is a priority though. And, organising a big event and being part of it, forces her to step out of her lonely comfort zone.

Of course Heather has no way of knowing that the job she’s taken on will lead to much more than just interacting with the world again. She’s about to get pushed much further out of her comfort zone than she could possibly have imagined. But then again, that is often the case in life – and at parties. They can so easily bring us much more than we expect, provided we’re brave enough to embrace the experience.

There it was, her opportunity to kick-start her life again. And, as restarts went, it made quite an impression. The hotel or club—she wasn’t quite sure how to label the building—looked rather grand at the end of the long drive. The Atlantic Ocean, throwing up a spray in the distance, only enhanced the picture. Even on this bright summer’s day she could see small rainbows in the watery mist the waves were producing. It would be easy to confuse this place with any of the up-market tourist traps the west coast of Ireland was peppered with. This could be any other posh resort catering to Americans trying to find their roots and golfers looking for an opportunity to try the links courses littered along the coastline. The heavy gate blocking the entrance told a different story. She knew too much about this place, its purpose and what happened behind those gates to confuse it for anything except what it was, a dream from the past and—if everything went according to plan—the start of the rest of her life.

She’d been looking at the building, the grounds, the gate and the little buzzer on the intercom box for a few minutes. If anybody on the inside happened to be keeping an eye on the entrance through those security cameras, they would have decided she was either scared or crazy by now—and they’d be right. She was apprehensive. Her hands were clasped together, her fingers worrying her wedding ring. After eighteen months of virtually living like a hermit, coming here felt like diving in headfirst. Still, if she’d had any doubts about leaving Dublin, that surprise visitor two weeks ago and his shocking proposal had taken care of those.

The bastard. She refused to even think his name. It still bothered her he’d had the nerve to show up at her door like that. Where would he have gotten the idea she’d be open to his suggestions? It had been clear that he’d expected her to embrace his offer—or should she call it an order—with open arms. His delusions of grandeur must have gotten the better of him, or he’d confused her with someone she clearly wasn’t. She didn’t get it. Even before her self-inflicted confinement, she’d made a point of staying away from him. Why would he think she’d changed her mind about him just because she was on her own? She didn’t know but lingering on that memory right now didn’t serve any purpose. She didn’t want him in her thoughts, especially not now. It would only make her more nervous than she already was.

With a sigh she lifted her hand and pressed the little button. She’d come this far. She hadn’t driven the five hours from Dublin only to turn away at the last hurdle. If she gave up now, it would be the end of the business they’d built together. If she chickened out of this, there would be no way of ever going back on her own terms. Going forward scared the shit out of her but going back frightened her even more. She could do this. She’d promised she would take this step. Breaking her word was not an option, no matter how scared she was.

When Jason Hudson and Heather Staunton first meet they are young and sure they are wrong for each other. As a result they spend a summer admiring each other from a safe distance.

Twenty years later Heather is coming out of mourning, having lost her husband and Dom eighteen months earlier. Jason, now the owner of an exclusive sex resort on the west coast of Ireland, struggles with the loss of his desire to dominate.

Jason’s resort is about to celebrate its first anniversary and party planner Heather has been hired to create the perfect celebration. Their reunion comes as a big surprise to both of them.

Helena Stone can’t remember a life before words and reading. After growing up in a household where no holiday or festivity was complete without at least one new book, it’s hardly surprising she now owns more books than shelf space while her Kindle is about to explode.

The urge to write came as a surprise. The realisation that people might enjoy her words was a shock to say the least. Now that the writing bug has well and truly taken hold, Helena can no longer imagine not sharing the characters in her head and heart with the rest of the world.

Having left the hustle and bustle of Amsterdam for the peace and quiet of the Irish Country side she divides her time between reading, writing, long and often wet walks with the dog, her part-time job in a library, a grown-up daughter and her ever loving and patient husband.