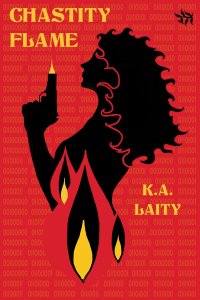 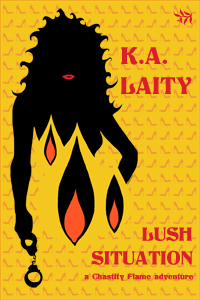 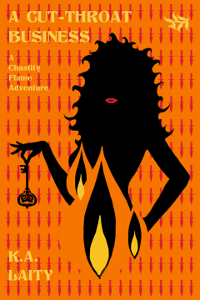 C. Margery Kempe wanted it noted for the record that Chastity Flame started out as her sexy book and then it became K. A. Laity‘s book and now this third one has almost no sex at all! Okay, there’s some but a lot of it takes place off screen, so to speak. It’s mostly a break-neck thriller. There’s a terrible killer at large, but there’s also a dangerous ex-colleague who wants to knock off Chas—and perhaps most terrifying of all for the wildly free and sexy secret agent, there’s moving in with her former colleague-now-history professor Damien.

She’s not exactly a cop, but Chastity is one of the people who protect us that we never see. This guy she’s after is really bad news. So what’s this killer like? Here’s a snippet from the opening chapter–

Daddy’s girl. That’s what she’d always been. As she sprinted down the dark street, the phrase kept repeating in her head. Her heart beat a tattoo in her chest and her lungs burned as she raced along. Adrenaline filled her veins as she sought a way out, away from this, but she could still hear his footsteps behind her.

Daddy’s girl. He had grinned as he said the words, onto her wavelength, her weakness, in just a few minutes of conversation. She had actually been pleased. He was smarter than they usually were, the men who fluttered around her like moths to a flame. She always found it easy to charm them, to make them desire her.

You’d hardly believe she had once been a plain tomboy. Her well-toned legs might be a legacy of that time, though exercise these days meant helping her maintain the look that turned heads. Right then she wished she’d worked more on pure endurance instead of shapeliness because his seemingly tireless steps got closer as she grew tired.

She skidded around a corner and her terror exploded. It was a dead end. Panicking, her gaze darted back and forth, looking for some break in the brick walls that lined the narrow lane. With a glance over her shoulder she stumbled forward into a ragged trot, eyes wild as she hoped there must be a way out of this. Someplace to hide would appear, like it always did in bad dreams, in movies, just when there was no more hope. Then a bin or a box would be there where you hadn’t noticed and behind it a narrow passage that led to freedom.

Her heart raced faster as the sound of his footfalls came closer.

Bricks, bricks, more bricks: up too high, a few windows with broken glass. If she had wings, a rocket, a fiery dragon—her thoughts were getting wild, hysterical. Isn’t that the word they always used, the word only for women? She had such contempt for her gender. She had felt hunger and contempt in equal measures for men, those she desired and those who desired her.

He paused at the entrance to the narrow lane, staring at her. Earlier she had preened as his interest became plain, but now she wished she had never seen him.

“Come to daddy,” he growled in an obscene parody of the fatherly approval she craved.

There had to be some way out! She ran to the far wall, overly conscious of her own panting breaths. Her fingertips scraped against the bricks on vain, her overheated brain suggesting that there could be some kind of secret exit if she applied the right pressure. What was that movie where the bricks moved and opened, revealing a secret alley? When she realised it was one of the Harry Potter movies a giggle began in the back of her throat.

Her giggles grew. No wonder they said a joke was hysterical when it was good. She stiffened when she heard his step so close behind her. The giggles becoming little gasps. She sank to the ground, hands up in a defensive posture.

“Now, now. This won’t do.” He grabbed her hand and yanked her to her feet…

WIN A COPY: The ebook came out in all formats October 7th from Tirgearr Publishing and you can win a copy by commenting below and telling me what scares you. Do you fear a stranger in a dark alley? Or something closer to home? Let us know.