Thank you so much for having me today and for the opportunity to share a bit about my new holiday release, Mistle Tow. I’ve always wanted to write a Christmas story. Though, I always thought when I finally wrote one it would be a mushy, heart-warming, sentimental, tearjerker. But when inspiration hit, that’s not what materialized at all. Instead it turned out to be a gift of sorts for the man who inspired the story. My husband.

For more than twenty years my man drove a tow truck while I was the stay-at-home mom and we raised three amazing kids. And now, that same wonderful man, allows me to live my dream of telling stories like this one.

So be forewarned, if you’re looking for a mushy sentimental, carol-filled, tree-trimming, tinsel clinging, twinkling lights and sweet togetherness kind of story, that’s not what this is. It’s really only a holiday story in the sense that it takes place over the Christmas season. It’s about a man trying to move on with his life while avoiding the holidays altogether. But it does contain a hot blonde in a Santa hat, some mistletoe and a sleek and sexy black ’66 Chevelle.

I guess it did turn out kinda mushy in the long run. A love story for the wrecker operator who hooked my heart when I was fifteen-years-old. And he’s never let go.

The last thing Brantley Holley wants to do this year is spend the holidays at home with his family.

In an attempt to move on from his failed marriage, Brant places the marital home on the market and also decides to clean house, ridding himself of any and all reminders. Although it wrecks him to do so, that includes selling his beloved ’66 Chevelle which also may have contributed to the demise of his marriage.

Brant puts his baby up on the auction block at one of the premier auction houses — the auction to be held over the holidays. But instead of racking up needless extra miles on her, which might be a detriment to potential buyers, he hires a flatbed tow truck to convey his precious cargo from Philadelphia to Arizona.

But when the rollback shows up, Brant is totally unprepared for the sexy blonde bombshell in the red Santa hat who steps out of the massive red tow truck.

All of a sudden, the holidays are looking a whole lot more festive.

Brant took one last sip of his coffee in time to hear the unmistakable rumble of a large truck pull up outside, followed by the obnoxious warning back-up beeper that tow trucks were mandated to
employ these days.

Placing his cup on the counter, he took a deep calming breath and hurried over to the door separating the house from the garage.

Hesitating, he stood there with his hand on the doorknob.

“Are you sure about this?” he asked himself for the hundredth time. He’d struggled with this decision for months now. Even after he’d made it and taken the steps to follow through, putting his girl up on the auction block was one of the hardest decisions he’d ever had to make. But it was time to move on. She brought back too many memories he needed to put behind him.

With determination he opened the door and rushed outside before the tow-truck driver rang the bell.

The first thing he saw was the flatbed of the tow truck and he was at once relieved to see how new and clean it appeared to be. The last thing he wanted was his Chelle being transferred on some greasy dirty wrecker. For one, she wasn’t being scrapped, and two, Brant kept all of his stuff in pristine condition. For their last ride together, he intended for her send off to remain the status quo.

Brant stepped out onto the front stoop and immediately pulled his collar up. It was damn cold and by the cloud cover, he didn’t doubt the first snowfall of the year was only hours away. “Come on.” He encouraged the driver. “Let’s get outta here before the bad weather comes.” It would kill him to see snow on his car. What had he been thinking? Why hadn’t he hired an enclosed trailer? Especially at this time of year.

The driver’s door opened and he lost all train of thought. One black-booted foot appeared on the step-down to the massive red cab. Brant followed the line of that knee-high boot up a slim, denim-covered thigh, hip, and waist to the plaid shirt that he half-expected to be topped off with a red and black trimmed jacket. But instead of some burly bearded lumberjack type, he stared into the flawless face of a woman who should be on the cover of one of his car magazines, draped over some sleek and sexy machine instead of driving a fucking rollback.

Things were definitely looking up. 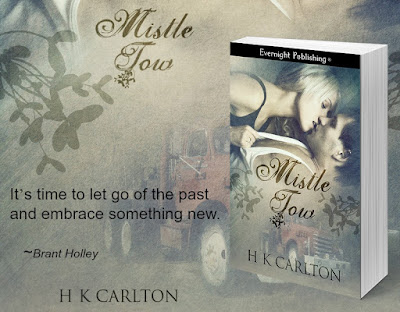 Hope you enjoyed the little teaser.

However you celebrate the season and even if you don’t, I’d like to wish everyone, the peace, love and charity, this time of year evokes.