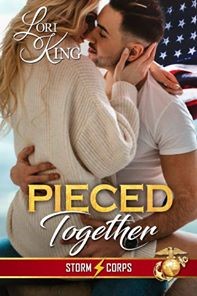 Pieced Together By Lori King

Two fractured souls must lean on each other to heal physically and emotionally….

Karly Stephens got her heart shredded, when the man she thought was supposed to be her forever, cheated on her. To avoid dealing with her tattered life, she threw herself into work.

Injured and battle-weary Marine, Garret Lole, agonizes when his team deploys overseas without him. When Karly is assigned to be Garret’s nurse, unexpected sparks fly.

Despite her scarred soul, Karly is drawn to Garret in every possible way. Like puzzle pieces scattered on the floor, they must figure out how to trust in themselves and each other. Picking up the pieces might mean a whole new world for both of them. 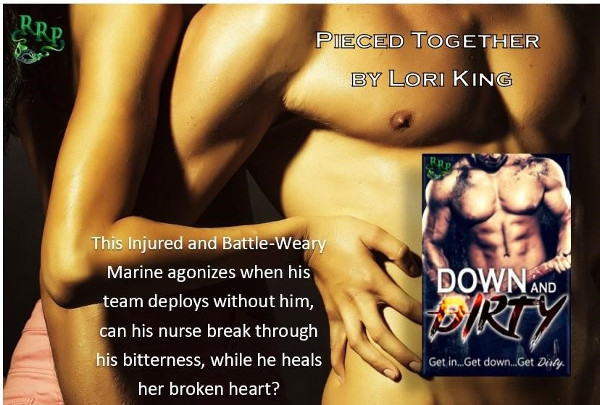 Karly felt like all the wind had been knocked out of her body. The man in front of her was over six feet of deliciousness wrapped in sexy muscles. His blonde hair curled slightly on top, but he kept it cropped short. It was his green eyes that truly captivated her, and she couldn’t find her voice for a moment.

“Are you my nurse?” he asked, his deep voice rumbling through her and making her insides shiver.

Breathlessly she nodded and murmured, “I am.”

“Damn. If I’d known a bum knee would bring me an angel I would have done it years ago.” He said, cocking his head and letting his eyes roam down her body. “What’s your name?”

“Karly.” She couldn’t have explained why she responded at all to the rude question, but she was on autopilot. Her body didn’t seem to be responding to anything but him. “Nurse Stephens.”

He reached for her hand, steadying himself on one crutch as he kissed her knuckles his eyes never leaving hers. She could feel the touch of his lips on her skin like a shot to the gut.

“You’re a Marine?” she repeated, realizing the instant it left her lips that she sounded stupid. “That’s great, my Dad is a Marine. 4th LAAD Battalion. Retired now, but he put in twenty-seven years before his hearing loss kicked him out.”

“No shit. I’m 4th LAAD Battalion.” Garrett’s eyes lit up and the smile he gave her made her weak kneed.

“That’s great.” She heard herself repeating, trying to avoid visibly cringing at her own ridiculousness. She never acted like a smitten teenager, she was notorious for being serious and single. Clearing her throat she held up the file in her hands, “Are you going to let me discharge you?”

“Nurse Karly Stephens, I’ll let you do anything you want with me.” His flirting was making it hard for her to think, and she grew irritated.

“Well right now, I just want to discharge you so I can go give a strep test to the four year old in the next room before his mom comes looking for me. Sound good?” she told him, stepping around him into the room and putting her file down. “Looks like you’re up for surgery. We can get you scheduled, just stop by the—”

“Admin office.” He interjected, “Yeah the doc told me that. I was just trying to figure out if the surgery was really necessary or not. I’m supposed to deploy in a few days and I really can’t leave my team hanging.”

“I’m sure a Marine with a bum knee is exactly what they want in Iraq.” She said, propping her hip against the only countertop in the room.

“Does it matter? Is there a good place for a Marine with a…” she looked at the paper again, “Handle bar tear to his left meniscus?”

Garrett’s green eyes shifted from a grassy color to a deep forest green and he gave her a panty dropping grin, “Underneath a nurse named Karly?”

It was too much. As attractive as he was, she had no interest in being a notch on a bedpost. “No thank you. Now, Dr. Aguiar has prescribed a muscle relaxer and pain meds, here are the instructions on how to take them safely. Please make sure you’re careful, mixing too much of these meds can be very dangerous.”

“Are you concerned for my safety, Karly?” he asked, moving a little closer. On his crutches, the move was less than seductive, and she giggled.

“Yes, you’re pretty awkward on those crutches, but don’t worry. After six to eight weeks on them you’ll get the hang of it.”

“So I’m having surgery then. No possibility of parole?”

She shook her head, “Nope. Of course, you can get a second opinion, but Dr. Aguiar is the best there is.”

“Then what the hell is she doing working for the VA?” he asked, taking the papers and folding them in half before he shoved them in his back pocket.

“She has to do a little charitable work here and there.” Karly responded, winking at him as she moved back around him and opened the door. “Please remember to stop by the admin office.”

He stood there for a second and then moved into the doorway, pausing before he passed her fully. Reaching out to cup her cheek, he stroked his thumb over her lips. “Until later, Nurse Karly Stephens.”

She watched him as he made his way down the hallway, his tall form struggling on the crutches as if his muscles couldn’t wait to break free of their confinement. He was as good looking from the back as he was from the front that was for sure, but he was also cocky, and she hated cocky.

Shutting the door behind her, she hurried off to the next patient, her mind still buzzing with the tempting flirtations of a sexy Marine. 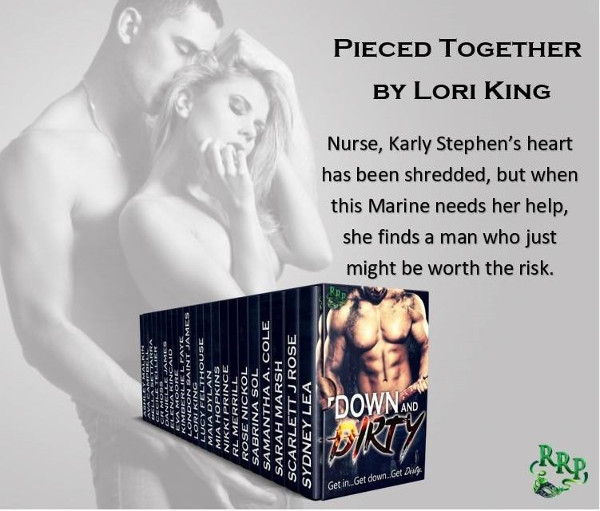 Lori King is the author of more than thirty Amazon best-selling romance novels, as well as a full-time wife and mother of three boys. Although she rarely has time to just enjoy feminine pursuits; at heart she is a hopeless romantic. She spends her days dreaming up Alpha men, and her nights telling their stories. An admitted TV and book junkie, she can be found relaxing with a steamy story, or binging in an entire season of some show online. She gives her parents all the credit for her unique sense of humor and acceptance of all forms of love. There are no two loves alike, but you can love more than one with your whole heart.

With the motto: Live, Laugh, and Love like today is your only chance, she will continue to write as long as you continue to read. Thank you for taking the time to indulge in a good Happily Ever After with her. Find out more about her current projects at http://lorikingbooks.com, or look her up on Facebook: http://www.facebook.com/LoriKingBooks or Twitter: https://twitter.com/LoriKingBooks.