So, what are you waiting for? The collection is available for just $0.99/77p, which is so cheap for all that content that it’s almost theft.

Thanks so much for agreeing to be interviewed, it’s great to have you here. So here are a few questions to help readers to get to know you better.

Have you always written? How did you get started?

No, I didn’t start writing until I was in my thirties. I’ve always been an avid reader, but before that it had never occurred to me that someone like me could write a book or a story. But then, I started attending Star Trek and media conventions and I became friends with lots of lovely fan fiction writers there. I didn’t write Trek fiction myself, but I did try my hand at writing a short story to celebrate another fandom I was into at the time… and I was completely amazed to find I *could* actually write something. It was pretty terrible, admittedly, but it was a start. I went on to write more stories in that series, learning as I went, and eventually I decided that I’d try and get something published. The stories I’d been writing were erotic, but also romantic, so I set my sights on Mills & Boon initially. Getting accepted by Mills & Boon was as tough then as it is now, so after half a dozen attempts, I switched to submitting my work to erotica publishers instead. Last year however, Mills & Boon reprinted one of my HQN books in the UK. It’s only taken me twenty five years to get there! LOL

Not really. I’ve been writing romantic erotica from day one, really, although I have also written a couple of sweeter romances since.

What was the first piece you had published, and where?

How did you feel about your first publication?

Elated! I found it hard to believe it had actually happened, even though I knew it had. I was still feeling that only ‘other people’ could be real writers, not me.

How did you come up with your pen name?

After I’d been writing for my first publisher for a little while, I had a book accepted for Black Lace and they asked me to come up with a new pseudonym. Fast! That evening, I watched ‘A Fish Called Wanda’ and the character of Archie had a daughter called ‘Portia’. The next day, I was watching some motorcycle racing on the telly, and heard the orthopaedic surgeon who looked after the riders referred to as ‘Doctor Da Costa’. Ta da!

What did you do before you started writing full time?

As a muse? Well, it’s usually some gorgeous actor or singer or other famous man that’s taken my fancy. My current inspiration is mainly Simon Baker, as the Mentalist, with a side order of Benedict Cumberbatch as Sherlock. In the past I’ve written books and stories with heroes inspired by Vincent D’Onofrio, James Marsters, Edward Norton, Dean Cain, David Krumholtz and many, many others… oh, I’ve had dozens of crushes!

What’s next for Portia Da Costa?

Well, I’ve got THE ACCIDENTAL CALL GIRL out now, and the next book in that series will be THE ACCIDENTAL MISTRESS, which continues the love story of John Smith, an urbane, kinky, drop dead gorgeous multi-millionaire, and Lizzie Aitchison, the young woman he originally met in a bar and at first believed to be an escort! These two have a fiery passionate relationship, but they both have issues that stand in the way of them reaching ‘happily ever after’. They’ll get there in the end, but it’s not going to be an easy ride…

I’ve also got the second novel in my Ladies’ Sewing Circle series out in May/June. It’s called DIAMONDS IN THE ROUGH, and it’s super-hot Victorian historical romance about two distant cousins, Adela and Wilson Ruffington, who have a thorny, difficult relationship, but who still can’t keep their hands off one another. As well as Diamonds, I’ve also got a Ladies’ Sewing Circle novella anthology coming out, called A GENTLEWOMAN’S QUARTET. This features all four of the Sewing Circle stories, originally published as Spice Briefs, and it’ll be published on the 15th March. 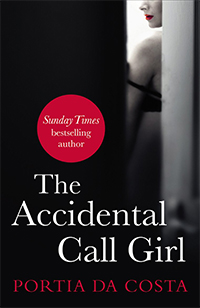 When Lizzie Aitchison meets John Smith in the Lawns Bar of the Waverley Grange Hotel she doesn’t realise at first that he thinks she’s “working”. The chemistry between them is dynamite from the very first glance exchanged across the room, and she can’t resist the allure of his fallen angel face and the way his lean body looks in a sharp business suit. Pretty soon, she’s playing a dangerous game with him. John’s a no nonsense guy who seems to be set on engaging an escort for sex rather than simply meeting a pretty girl to chat up in a bar, and if that’s the only way she can get this gorgeous, irresistible man, Lizzie decides to act the part. Over just one drink, she becomes “Bettie”, the high class call girl…

Read an excerpt of The Accidental Call Girl 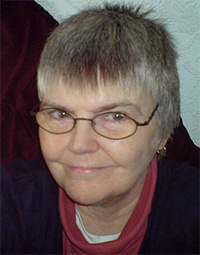 When Portia isn’t writing she’s usually to be found loafing around watching the television or reading the works of Agatha Christie or Sir Arthur Conan Doyle. Sometimes both at once. She lives in the heart of West Yorkshire in the UK, with her long suffering husband and their two beloved cats, Mork and Mindy.

Find out more about Portia at the following…