Mud and Honey by R.L. Merrill

A deputy sheriff and a tree trimmer meet during storm cleanup on a treacherous road and literally fall for each other in the line of duty. Calvin wants to explore their connection and Flor is game. Then things get sticky when his hard-earned sobriety is threatened and her pride is bruised. Their chemistry can’t be ignored, but can they get past their personal obstacles? It’ll take some getting dirty to get to the sweet in this story of broken hearts and fresh starts. 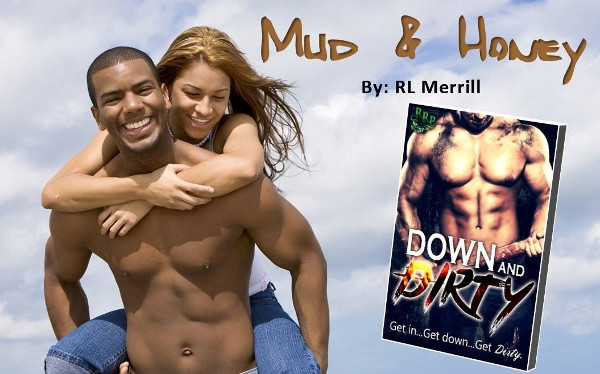 So that’s how I found myself parked on Crow Canyon road, blocking part of a lane, waving traffic through a coned-off area where Alcosta County Public Works was trying to remove a downed tree that, if left to hang there, would end up in the middle of traffic the next time it rained. The hillside looked awfully close to sliding right down on top of us, it was so saturated, but I supposed that’s why the good old sheriff’s department was out here keeping the public safe.

Cars flew by, ignoring signs to slow down, and my field training officer, Sergeant Diaz, warned me this could be a seriously hazardous situation. Diaz and I had thrown down some flares to hopefully grab the attention of drivers multitasking in their SUVs. Maybe we needed to put up a Starbucks sign. People sure as hell seemed to stop for that.

I couldn’t help but be distracted myself. Way up high on the hillside, a lone tree trimmer was strung up in the tree, trying to cut back some limbs that had fractured but hadn’t dropped. The guy’d been up there for at least two hours and the crew kept a close eye on his progress. He’d come down a few minutes prior and was on his way up the second tree, and for the life of me, I couldn’t help but watch the graceful way he managed to climb the ropes like some sort of acrobat in Cirque du Soleil. He was obviously experienced. I turned back to watch the traffic but I kept glancing back, captivated by his movements.

The wind picked up and howled through the canyon, causing his ropes to sway. Someone in his crew shouted at him in Spanish and he flipped them off. I chuckled to myself at their camaraderie before I turned back around.

In time to see my life flash before my eyes.

Diaz shouted as the SUV heading right for us skidded at a forty-five-degree angle. The driver overcorrected and clipped our patrol car, causing the front end to slam into me and knock me backward. The SUV crashed into the trees, one of which the trimmer was suspended from.

Everyone froze as that tree groaned and lurched sideways, falling into the tree next to it. The trimmer dangled between the two, frantically trying to grab on to one or the other. He swung into the tree that the car hit and it creaked ominously, shifting farther into the other one, so he let go. He swung to the other tree and wrapped his arms and legs around the trunk.

And just like that everyone sprang into action. Except me. I was still trying to catch my breath from where the fall had knocked the wind out of me. Diaz ran to my side.

“Sonofabitch, Graham! You alright dude? You went down hella hard.”

I nodded as I coughed and gestured for him to help me up. He was shorter than my six feet three inches, but he was a stocky guy and he had me on my feet in no time.

“Paramedics are on their way. You need to get checked out.”

I did a quick assessment: bruised ribs and hip on one side, and both hands scraped. Maybe a little road rash, but other than that, I was fine.

Diaz cursed under his breath and ran with me over to the SUV, now crumpled against the tree.

The airbag had deployed and the woman was groaning when we got to her side. With her cell phone clutched tightly in her hand.

“Ma’am, are you alright?” Diaz asked as I checked the backseat.

Fuck. She had two kids in booster seats. They were both crying, but neither looked hurt.

California had adopted strict hands-free laws this year, and since the lady’s car was fairly new, it most definitely was equipped with hands-free or Bluetooth technology. She was one of those holdouts who made things dangerous for the rest of us.

I opened the rear door and looked into the biggest blue eyes I’d ever seen.

“Hey sweetie, are you alright? Did you bump your head?”

The little girl clutched her American Girl doll to her and shook her head, her cries settling down to whimpers and sniffles.

Her little brother was still wailing away. He looked to be a little younger than her, maybe two to her four years old. She looked over to him and held out her hand. He took it and squeezed, continuing to cry.

“I don’t know what happened,” the mother was still mumbling.

“Ma’am, the ambulance is on the way, do you feel like you can—”

A cracking noise came from the other tree her car had smashed against and it shifted, jolting the car. Diaz and I exchanged looks and began moving quickly. He went for the driver’s seatbelt while I fumbled with the car-seat buckle on the little girl’s seat.

“Honey, I need to get you out of this car, okay? I’m going to get your brother out first and then I want you to wrap your arms around my neck so I can carry you both, okay? We need to hurry.”

She nodded, her big blue eyes growing even wider. I leaned across her and started working on her brother’s buckle, but he just screamed louder for his mommy and slapped at my hands.

Diaz got the mother out of the car but she was so out of it she didn’t seem to notice her kids were still inside. I worked frantically to get the boy out of his seat, finally springing the buckle from the latch and moving quickly to scoop him up into my arms.

I heard another crack and then shouts from the public works crew.

The little girl snaked her arms around my neck and I backed out of the SUV with both kids in my arms. I managed to get several steps away as the tree groaned once more and fell forward onto the car.

The tree trimmer screamed as the rope, which was caught in the second tree, pulled his legs away from the tree he was holding on to.

That was a female scream.

That’s a woman up there!

Once upon a time… a teacher, tattoo collector, mom, and rock ’n’ roll kinda gal opened up a doc and started purging her demons. Several books later, R.L. Merrill is still striving to find that perfect balance between real life and happily ever after. You can find her lurking on social media where she loves connecting with readers, educating America’s youth, being a mom taxi to two busy kids, in the tattoo chair trying desperately to get that back piece finished, or head banging at a rock show near her home in the San Francisco Bay Area.