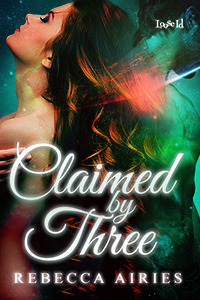 Kassius, Teague, and Berenger are dealing with serious vandalism on their property, but they aren’t waiting any longer to claim Sephanie. They intend to draw the beautiful, curvy woman into their lives with romance and all the sex she can handle while they discover who is behind the trouble.

Sephanie has always wanted a menage and jumps at the chance to date the three sexy men. Their first dates are everything she’s dreamed of and leave her craving more. When vandalism and sabotage begins to focus on her, Sephanie doesn’t understand it, but is determined to stay with her men.

The person behind the attacks won’t stop until he has what he wants. And it seems like what he wants is Sephanie, Kassius, Teague and Berenger are having none of it. Sephanie is their woman, and they’re going to keep her safe.

Teague tugged her forward. She stumbled but went along. There were a few other machines in the large building, but Teague went to a door on one wall. He opened it and escorted her inside. Shelves lined the storage and supply closet. On one side of the room, she saw a worktable and a set of gray shelves above the workbench.

“Yes, that’s where I want you.” Teague guided her over to the shelves. “See this?”

He reached past her and grabbed the shelf. His hand slid into one of the boxes that separated the shelf into a grid. The particular part of the shelf he grabbed had no divider on the interior, only a wooden strip down the front. He pulled on it. The shelf didn’t move at all. He turned and smiled at her.

“I see it. What’s so special about it?” She raised a brow. Her mind readily supplied her with the possibility of him tying her to that after she’d noticed it had no divider. It sent a surge of desire through her, but she wouldn’t let him know that yet.

“Special, not much. I’m showing you it will hold you when I fuck you hard, but since you still have an attitude, we’ll start off with a spanking. Take off your shirt.” He turned to face her and let his gaze sweep over her body.

A thrill of anticipation shot through her. Her inner muscles clenched. The knot of need low in her belly intensified. She lifted her hands and worked her fingers under the seal. Slowly, she separated it until the light purple shirt hung open, teasing him with a thin strip of her flesh and occasional glimpses of the slope of her breasts.

“Take it all the way off, Sephanie,” Teague ordered. His voice dropped lower, and he stared at her intently.

She slipped the shirt off one shoulder, revealing her flesh a little at a time. His gaze fixed on the hardened nipples of her breasts. He and Kassius had taken her bra from her before she could put it on this morning. She didn’t mind, especially since she knew he’d be touching her breasts in a few moments.

She’d hoped for something such as this. In fact, she’d planned to lure one of them away if they hadn’t made a move. She couldn’t resist the urge to touch them anytime they were close.

Whenever she watched them walk or looked at them, desire flared and began to build. After discovering how good their touch made her feel, she’d chase them.

His hand extended in blatant demand. “Give it to me.”

She looked down at the shirt. With a shrug, she placed it in his hand and watched him put it on a hook. Her thighs clenched. What will he do now? She loved the orders and the dominance, even if she resisted sometimes because she had to keep them from getting too arrogant.

“Face the worktable and unfasten your pants.” He glided forward to stand close to her.

She opened the closure and began to push the pants over her hips. His hands closed around hers, stopping the movement. His body pressed her forward until her hips touched the edge of the table.

Rebecca Airies lives in Abilene, Texas. She cohabits with two very demanding cats that are certain every flat space in the house belongs to them. She spends her time writing, fighting the cats for the laptop desk, and dreaming up new ideas. She loves creating fantasy, paranormal, and sci­fi worlds. She’s always working on at least a couple of stories, because those characters are so persistent. When not writing, you can find her playing cards with friends, reading, gardening, crafting, and playing video games. Everyday life might be normal, but the fantasies which inspire her writing are out of this world.