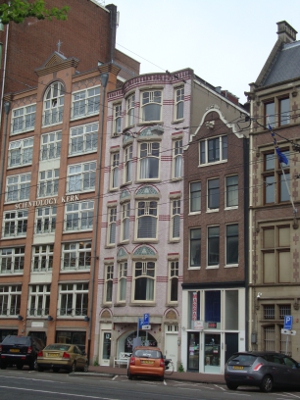 Wonky buildings – the city is full of them

I’m baaaack! Well, if you don’t follow me on Facebook and/or Twitter (and if not, why not? 🙂 ) you probably didn’t even know I was gone. But I was – I was in Amsterdam. Part holiday, part research trip, I spent a few days exploring the city. A city, it seems, with two parts. A smutty part, and a vanilla part. Here’s a brief run down of what I’ve been up to…

The Rijksmuseum has recently been re-opened after a huge refurbishment. I hadn’t seen it previously, of course, so I don’t know if it’s any better, but I certainly liked it. I’m not the sort of person that will stand and look and read about every single piece, but I still had a good look round. The absolute highlight for me, being the library. I was under the impression from reading about it that you could only look at it through some glass – not true. You can go right in (on two floors) and look around. It’s huge, gorgeous, old-fashioned and even has free WiFi, which is why I was able to Tweet and Facebook from the very room! Recommended.

Recommended to us by our rep on the campsite (who was very helpful – if you’re reading this, Dan, thanks again!), we headed there after the Rijksmuseum as it’s just a few minutes’ walk away. Neither myself or my other half are big drinkers, but our rep said it was fun. I don’t want to ruin it for anyone who goes, so let’s just say it’s more than just a bar – it’s an interactive, fun museum. Then at the end you get a free cocktail and two free shots – though of course they’re not really free as you’ve paid for them as part of your entrance fee. It’s something a little different, and fun, and made us a tad giggly…

We were still giggly after crossing the road to the Van Gogh Museum so we managed to go right through the place without seeing the famous Sunflowers, so we had to go back down and find it. If you’re really into art and paintings, this place is recommended. It also has works by other artists that Van Gogh knew, I believe.

We try and visit this place in every city we go to (though somehow we missed the one in Paris – another excuse to go again next year 😉 ) and Amsterdam was no exception. They’re  not cheap places, by any means, but they do good food and nice big portions, which was nice after a busy few hours. And the staff are always lovely!

We passed this on the way to Anne Frank’s House. It’s a monument for gay and lesbians who’ve been persecuted. It’s simple and pretty, jutting out into the canal. We couldn’t see the whole thing at the time as it was covered in flowers, which I suspect is something to do with a GLBTQ festival that was on recently. An interesting monument, well worth checking out.

It’s very difficult to describe this place. You can’t call it fun, nice, good, or exciting. It’s just not appropriate, given the story behind it. It is though, very interesting, poignant, and quite emotional. Despite the fact you go around most of it in a line and kind of have to go at everyone else’s pace, I still found it quite tearjerking. If you’re interested in history at all, this is a very educational and fascinating place, and will probably make you go and buy Anne Frank’s Diary – I certainly did. I’m not saying any more as I don’t want to give it away, but it’s worth visiting. Though make sure you pre-order tickets online before you go, otherwise the queue is huge. We pre-ordered and got given a time, which made it much faster.

We popped in for a few minutes, intending to climb the tower, but the tours were full as due to the narrow nature, there are limited numbers on tours. We didn’t want to stand around waiting when we could be out exploring other things, so we had to give it a miss this time. I suspect it’s brilliant up in the tower as it’s the highest point in Amsterdam, which isn’t saying much as the place is flat, seriously flat. The church itself is fairly plain compared to some I’ve seen, but is pretty much next door to Anne Frank’s House, so worth seeing if you’re in the area.

We hadn’t really intended to go here, but we literally walked past it on our way somewhere else, so we popped in. Naturally, as it’s a canal boat, it’s not that big, but it’s very interesting to see how everything’s been designed to make it fit. It’s very very cute and interesting, and the man running it seems full of knowledge about house boats in general and how it’s a very expensive undertaking to have one! 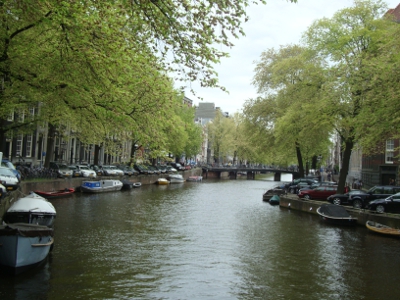 It’s got to be done – Amsterdam pretty much thrives on its canals, and has more than Venice. The one we went on had headphones so you could select your language and hear the recorded tour. It was a little impersonal, but the man driving the boat was so grumpy I wouldn’t have wanted him to give a tour anyway! It’s interesting to be so physically low down and see what’s around you. I loved the fact that we went right up and around Centraal Station (which is the transport hub) and sailed between that and North Amsterdam on a great big lake. The tour was about an hour and ten minutes and really is a must, especially since it’s pretty cheap.

We had to dash round a little as we got there with just an hour before closing. We saw everything on the ground floor – but aren’t sure what’s up the stairs! What we did see, though, was absolutely fascinating. Again, if you’re into history, this gives a real insight into World War II, mainly from the perspective of what happened in Holland/The Netherlands. I’d definitely go back there again and take it all in more slowly and check out the rest of the place. It’s definitely worth a visit.

Our Lord in the Attic

A clandestine church. In the 1660s, when it became illegal to worship certain religions, this chapel was built on the top three floors of a couple of houses. It’s intriguing, as, like Anne Frank’s House, it couldn’t be seen by the outside world. It’s much bigger than I was expecting, and very ornate, considering it was hidden. The whole idea is intriguing and it’s also slightly amusing that the place is pretty much in the middle of the Red Light District. Again, worth checking out.

It really is pretty much just a square, with buildings all around and a monument in the middle. Like Trafalgar Square, but not as pretty. Madame Tussauds is just off the square, too, as is the Red Light District.

Basically a house museum. A very beautiful building, both inside and out, with lots of very interesting features and a lovely garden. If you’re interested in visiting historical properties, again, this is worth checking out.

We also went into various bars and cafes (though not of the drug-selling variety – though just walking past them was enough to get you stoned), one of which overlooked an alleyway with the infamous red-lit windows. What we suspect many people didn’t know (thanks again to insider knowledge from our rep), though, was that the “ladies” in that particular establishment were in fact, transsexuals. It was a truly fascinating insight into the Red Light District to sit and watch people going in and out without them knowing. It was great for research! Look out for A Taste of Amsterdam – though of course I’ve got to write A Taste of Rome, first. 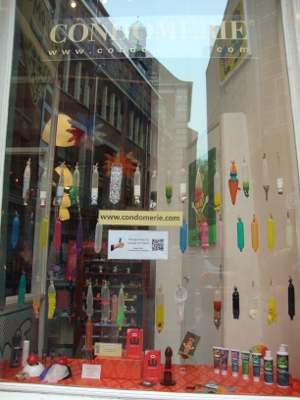 The Condomerie – where people mainly stood and giggled. Yes, I was one of them.

The Red Light District itself is pretty much what you’d expect – ladies in the windows in their underwear. The vast majority are not very attractive and are standing there smoking and messing around on their phones. Not sexy. There are lots of sex shops, too, many really tacky places like you’d find in London’s Soho. Thankfully, there were a couple of really nice ones, though the staff weren’t a patch on the Sh! Girlz. I found it really interesting from the perspective of research, but found it horribly seedy, but better from the perspective of the working girls. It’s heavily policed and there are CCTV cameras everywhere. If anyone misbehaves (i.e. football fans jeering and banging on the windows) the girls will whisk their curtains shut straight away. Can’t say I blame them, really.

Overall, it’s a city where you can pretty much do whatever you’re interested in. If you don’t want to see the seedy parts, then you avoid them. It is very confined to one section in the centre. There are museums galore, walking tours, a zoo (we purposely didn’t go this time as we know we’d have spent an entire day there), parks, etc, etc… I did find it much more difficult to navigate than London, Paris or Rome, despite the fact it’s smaller. I suspect the fact there’s only one Metro line (which was closed) didn’t help. Also, there are bikes literally everywhere. Crossing the road is taking your life in your hands – even more so than Paris or Rome as you can’t always hear the bikes coming!

So, that’s a snapshot of the city and what I did there. I enjoyed it and would definitely go back, but Paris still holds the crown for my favourite city in the world… so far.