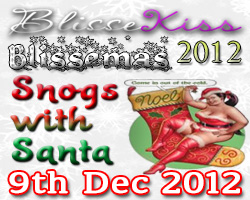 It’s time for a very special Sunday Snog! This one is part of Blissemas and is a Blissekiss event. Which means… as well as getting some super hot snogging action, you can also win prizes!

The awesome Blisses are giving away a bundle of print books as a grand prize and all comments on all blogs will go into the draw to win the Kindle Fire, too. So make sure to leave a comment – there’s lots at stake! 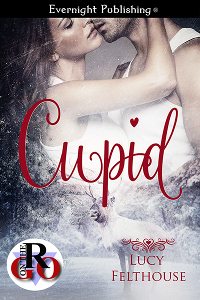 So, without further ado, here’s my snog. It’s from my Christmas release, Reindeer Games: Cupid. It’s actually set in early January, but there’s definitely a holiday vibe about it! There are also several other books in the Reindeer Games series to check out!

Turning to face her, he felt simultaneous lurches in his chest and groin. She really was the most beautiful creature he’d ever seen. In all his long years, he didn’t think he’d felt quite this strongly about someone — and, if he was honest with himself, it scared him. Particularly since he knew it was going to kill him—not literally, of course—when they broke up.

“What’s the matter?” she asked.

Cassius shook his head, as though to rid himself of his maudlin thoughts. “Nothing,” he replied, stepping towards her, “I was just thinking about how beautiful you are.”

She lowered her eyes demurely, and a wash of colour crept across her cheeks. It was totally adorable, and Cassius’ rapidly swelling cock leapt in response. She seemed to get a grip on herself, and looked back up at him. “Thank you. You’re pretty damn gorgeous yourself. Now kiss me.”

“It would be my pleasure.” He leaned down to do just that, but then stopped. “Oh, hang on one moment.”

A little crease appeared between her eyebrows as he backed off. Then he walked over to his bedside table, removed his glasses and put them down. “Okay, I’m all yours.”

“Well, thank fuck for that! Come here.” She shuffled back on the bed until she was leaning against the pillows, and patted the space next to her.

Cassius didn’t hesitate. He noticed she’d already taken off her shoes, and he quickly pulled his off before joining her on the mattress and moving instantly into her open arms. Their lips met, and once more Cassius was astounded by the strength of feeling he had for this woman. It was as though she’d cast some kind of spell on him, almost like the mating bond that some of his kind experienced. But he’d never expected to feel that—his reindeer colleagues were all spoken for, and he’d never been attracted to any of the girls, anyway. He’d resigned himself to the fact that any attachments he had would be of the human, not supernatural, variety.

As his tongue slipped sensuously against Carina’s, and their hands wandered across each other’s bodies, he came to the conclusion that was just fine. If this was human love, then he was more than happy with it. Carina was perfect — and for the time being, at least, she was his.

Check out the blurb and buy links here – it’s available from 17th December, and you can add it to your Goodreads shelves here.

Also, don’t forget to head back to Victoria’s site and see what other luscious lip to lip action other authors have posted and get commenting in order to be in with a chance of winning some awesome prizes.