“…if, like me, you enjoy escaping the monotony of the office for fifteen minutes and finding a quiet corner with your Kindle for some down and dirty reading, then Raising the Bar is a book for you. Add in luscious Luciano, and what’s not to enjoy?”

So if you want “some down and dirty reading” then check out more information on Raising the Bar and kink up your Kindle!

Have a fab weekend, everyone!

Another Review for Ditched!

Here’s what Day Dreaming had to say:

“It was fast paced and so hot that it even had me panting. I would have loved for this story to be longer to see how this could have developed into an actual relationship. All in all, I enjoyed this short story which satisfied my reading habit.”

Check out the full review here.

Grab your copy of Ditched here. 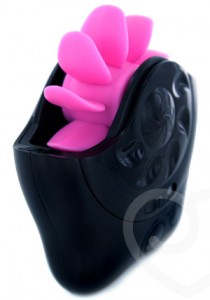 Those lovely folks at Lovehoney sent me the Sqweel 2 Oral Sex Simulator to test out. I never used the first incarnation of this toy, so I’m a total Sqweel newbie. Marketed as “the world’s best oral sex simulator for women” this toy has ten silicone tongues, three powerful speeds, 30% more power than the first version of the toy, and a new reversible mode and flicker function.

My first impressions were good: the packaging was great, the toy itself looks good and is of good quality, and it’s easy to store. It takes two AAA batteries which are easy to come by, and switching on the toy is pretty self-explanatory (though there are instructions, too!).

There are definite pros and cons to the Sqweel 2 Oral Sex Simulator. It’s well made, innovative, not too expensive and feels nice on your lady parts. However, the material means that unless you want to be sore, lube is absolutely necessary, so no using this for a quickie. Also, it’s fairly noisy and if you press it too hard to your body, it slows down the mechanism.

Overall, if you find it easy to climax and are looking for a sex toy that’s a little different, then I’d definitely check out the Sqweel 2 Oral Sex Simulator. But if you like your toys with serious power and concentration on your clit, then I’d probably skip this one.

Despite its smaller size, it still has plenty of functions to keep your lady bits happy. There are three rotating speeds in the shaft, ideal for stimulating your G-spot. And for your clitoris, there are 3 speeds and 4 patterns – bliss! The best part is that you can use the rotation and vibration either one at a time, or both together. So there is plenty of variation, too! And that’s before you throw in the fact that it’s waterproof – even more fun! 😉

After a lovely, lovely time away which went far too quickly – I’m home sweet home! I’m shattered and currently wading through my emails. I’ve had some goodies, too, including a story acceptance, a fab review (see below) and information on my appearances at Erotica, which I’ll share when they’re confirmed.

Once I have all my photos downloaded I’ll be posting a couple of blog posts about my holiday/research trip. I had an awesome time, particularly when I revisited the settings of some of the scenes from Bite with Height. I am also jam packed with ideas for the follow up. So watch this space!

“Naughty Delivery is a quick but tantalizing read about a couple who try something new. The story is cute, sexy, and a very fun read. I enjoyed reading this novella, and I will be happy to read more by Lucy Felthouse in the future.” 4 out of 5, Book Savvy Babe

You can see the review in its entirety here.

Bag yourself a copy of Naughty Delivery here.