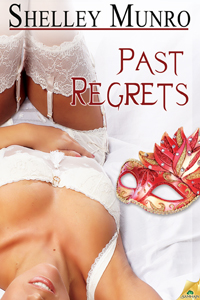 Past Regrets is my upcoming contemporary release, due out on 10 September from Samhain Publishing. It’s book two in my Love and Friendship series and features a married couple with a divorce hanging over their heads.

Julia Maxwell was a seize-the-moment party girl until the night she spent with up-and-coming rocker Ryan Callander. From that moment, she was a one-man woman. Pity he hasn’t kept with the program.

Tired of the secrets that have kept her out of the press and Ryan’s fans happy, angry with mounting evidence of infidelity, Julia is older, wiser, and determined to divorce his cheatin’ ass.

Ryan’s long European tour had more than its share of hard knocks—one of which landed on his head when he was mugged. Divorce papers waiting for him at home are a shock that fills in some of the holes in his sketchy memory. But it could be too late to salvage his marriage.

If Ryan thinks flirtatious smiles, seductive touches, and hot-and-heavy kisses are going to smooth things over, Julia’s got a hammer with his name on it. To her surprise, he picks it up, determined to rebuild a bright future for both of them. But the past is lurking with some missing pieces that could bring their hearts crashing down.

Warning: Contains a pissed ex-stripper turned burlesque dancer, a bunch of nosy friends and a smooth-talking rocker with one thing on his mind. Stripper poles and skimpy costumes may be involved.

And here’s an exclusive excerpt from Past Regrets:

Their apartment surprised her with its tidiness. Caleb picked up a remote from the arm of a battered sofa and the mellow sounds of a fifties ballad filled the room.

“Would you like to dance?” Ryan tugged her into his arms before she had a chance to reply, and she automatically fell into step with him. The music didn’t quite fit her expectations either. That would teach her to make snap judgments.

She felt a body move behind her and another set of masculine hands touched her, cupping her hips gently as he swayed to the rhythm. Julia relaxed, enjoying the music and the feel of two hard male bodies corralling her.

“It’s one of the things we have in common,” Ryan murmured against her ear. “We enjoy music from different eras.”

Ryan lowered his head to kiss the corner of her mouth. Caleb rubbed his body against her ass. Both men had erections, and the knowledge sent a bolt of lust spearing to her pussy. Her hands wandered under shirts, over bare skin, mapping Ryan’s shoulders, tracing the tattoo that disappeared under his T-shirt sleeve and testing Caleb’s biceps. She licked Ryan’s lips, encouraging him to open for her. The crisp taste of beer and a spicy masculine flavor hit her taste buds, and her fingers curled into his shoulders, forcibly holding her to him.

Behind her, Caleb nuzzled her neck, his warm mouth sucking and nibbling. A nip of teeth sent a jolt of pain through her, the stroke of a tongue soothing the tender spot. A shiver followed on the heels of the sting, resulting in increased moisture between her thighs. He’d leave a mark, but she didn’t care. This amount of pleasure was worth the price of a little ribald teasing from her friends during the coming days.

Then she ceased to think about anything except the feelings surging through her hypersensitive body. Ryan’s lips and tongue stroked hers, seduced and tempted her. Caleb’s hands slid beneath the silky midnight blue fabric of her camisole top, his calloused fingertips dragging sensually over her warm skin. His hands moved higher until they nudged the undersides of her breasts. Her imagination did the rest, shunting arousal to every inch of her body.

Her eyelids lowered, screening her eyes, her lips moving against Ryan’s. The man could really kiss, and she appreciated his lack of haste. Somehow, most of their clothes disappeared, hitting the floor one by one.

“I can’t wait to taste your beautiful pink nipples. I’m going to suck one deep into my mouth and play it with my tongue until it’s hard and needy,” Ryan said.

“And I’m going to suck on the other one so you experience every sensation twofold.”

It was amazing how she could tell one man from the other already. Caleb’s voice was a touch deeper. Both were sexy, but of the two, Ryan had the edge. She’d always had a thing for men with dark hair. That it came with sexy blue eyes was a real bonus.

“Do you enjoy touching yourself?” The soft question was whispered in her ear and her eyes shot open.

She found one man on either side of her. They moved well for big men. She hadn’t heard a thing.

“Yet tonight you’re letting us touch you.” Ryan reached out, letting his hand hover over her breast. It was so close all she needed to do was take a deep breath and he’d graze her nipple.

“Variety is good.” Huskiness coated her voice, told of her arousal.

“Most women want to settle down and have a family.” Caleb’s words held a question, yet she didn’t feel as if he were judging her.

“I haven’t found a man who engages my interest.” Julia shrugged her shoulders hard enough for her breasts to bounce. Ah, contact.

Twin grins bloomed. Caleb and Ryan worked in tandem, playing with her breasts, plucking and tweaking. Pinching. Stroking. Driving her to distraction while she tried to concentrate on the questions they asked.

“So you don’t believe in divorce?” Ryan asked.

Julia huffed out a laugh that ended on a needy groan. “This is the weirdest conversation I’ve ever had during a one-night stand.”

Ryan didn’t answer. Instead he bent and brushed a soft kiss over her mouth before leaning lower still. He closed his lips around a nipple, the intense heat of his mouth making her moan her pleasure out loud.

“Is he doing it right, sweetheart?” Caleb cupped one ass cheek with his big hand before he, too, claimed a kiss. He was rougher than Ryan, a darker flavor. Different but still very good. They kissed her, applying suction together, the sensations making her knees weaken, her folds wetter, plunging her into neediness.

Caleb wrapped an arm around her shoulders, holding her upright with his strength. “Bedroom.”

Seconds later, she bounced on the mattress, catching the hungry expressions on their faces. Two tom cats eyeing a mouse. “You’re looking at me as if I’m dinner.”

Ryan’s hands went to the button fly on his jeans, and she tracked the move, noting the bulge at his groin. He paused, and met her gaze, his pale blue eyes glittering with amusement. “You say that as if it’s a bad thing.”

CONTEST: Go into a draw to win an Amazon gift certificate. Complete the rafflecopter below to enter the draw.

Shelley Munro is tall and curvaceous with blue eyes and a smile that turns masculine heads everywhere she goes. She’s a university tutor and an explorer/treasure hunter during her vacations. Skilled with weapons and combat, she is currently in talks with a producer about a television series based on her world adventures.