It’s here, it’s here! Smut by the Sea Volume 2 is here! I had fabulous fun editing this anthology with Victoria Blisse, as well as contributing my own story. On the Big Wheel is all about naughtiness in public, so there’s not much snogging, but hopefully this will give you a taste of the story:

“Come here,” he said, reaching for Brigit’s hand and pulling her back towards him. He kissed her, swirling his tongue into her mouth and tasting his own juices there. He didn’t mind – it was a super hot reminder of what they’d just done. “That, babe, was fucking incredible. Words just don’t describe. Oh, we’re on the move again.”

They were. They cuddled, looking out across the sea on one side, and the town on the other as they slowly descended to ground level. All too soon, they got there and the doors on the capsule sprung open on the opposite side to the ones they’d used to get in. Allen stood, wobbling a little as he did so, then picked up his coat and stepped out onto the metal platform. He turned and took Brigit’s hand to help her down. He didn’t let go, instead squeezing it playfully and leaning to drop a kiss onto her hair as they exited the ride and walked back out on to the street.

You can get your hands on this brand new anthology here.

I’d like to welcome Justine Elyot to Filthy Friday. She shares some insight into the choice of location and subject for her bittersweet story in Smut by the Sea. Take it away, Justine!

An End of the Pier Affair by Justine Elyot

I knew when I saw the call for Smut By The Sea that I had to send something in. I live in a seaside town, after all. My problem came in deciding which of the many and varied aspects of resort life I wanted to include in my story.

In the end, I found my inspiration at the end of the pier. Every self-respecting seaside town has its Winter Gardens or its Pavilion – the palace of delights built to entertain the summer masses during the sultry evenings of their holiday. An ‘end of the pier show’ is part of the British lexicon, describing a mix and match variety performance of cruise-ship singers, spangly-tight-wearing dance troupes and comedians unsuitable for younger audiences. (‘If easily offended, please stay away,’ the handbills often recommend.)

A lot of these theatres are in financial difficulty now. A night out at a show is no longer an integral part of the British seaside experience – besides, the camping and caravan sites offer their own on-site entertainment for nothing. The summer revenues can’t pay for maintenance of the draughty, ageing buildings. I went backstage at my local specimen earlier this year and was shocked by the dilapidated state of the dressing rooms and corridors. The ‘famous names’ aren’t so famous any more. As my opening paragraph says: “There was a saying in the business that you played Goldsands Winter Gardens twice in your career – once on the way up, once on the way down. This was Mark’s second appearance there.”

The male protagonist of my story, Love In The Low Season, is a faded singer, once popular, now only able to make a bare living in cabaret-style shows at obscure provincial venues. He’s exactly the kind of man who appears in front of eight people on a Wednesday night in February at my local theatre, poor fellow. But I appreciate him, and I appreciate the efforts that are made to keep these places open.

More and more of them are closing every year. I hope mine won’t be next.

Find out more about Justine at http://justineelyot.com

Er, yes, that would be me! So, give a big welcome to me as I blog on my own website about Smut by the Sea, for the Filthy Friday series! 😉 *applauds crazy self* 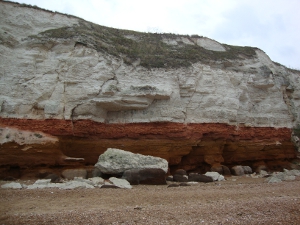 But no, this story has nothing to do with having sex in car parks, flashing lights, etc. Instead, it has to do with a super cute fairground worker and the girl that sets out to seduce him. It’s set in my favourite seaside town–and the one I know best–Hunstanton, which is in Norfolk, East England. It’s a really nice Victorian town with a mix of beautiful buildings and gardens, spectacular beaches and cliffs, and the usual seaside stuff of amusement arcades, fish and chip shops, crazy golf and funfairs. My story, as I’m sure you’ve already guessed, has to do with the fairground, and also the cliffs. 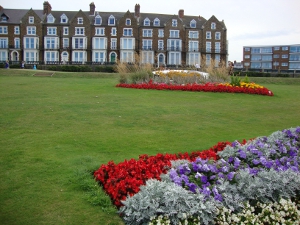 When Victoria came up with the idea of the anthology and asked me to co-edit and contribute, I immediately fell to thinking about the seaside for inspiration. I could have used a foreign beach for a location, but I wanted to write something very British which captured the light-hearted meaning of ‘smut’ and also was very sea-related, if that makes sense. So, I thought about the seaside town in the UK that I know best, and lo and behold, an idea came to me. Sadly, the hot male character is completely fabricated–I’ve never seen a hot guy working at the fair there–and so is the entire situation. But the location is very real, and I’m sure people (not me!) have really had sex on that beach. So it won’t take much imagination to picture the happenings in my naughty story. 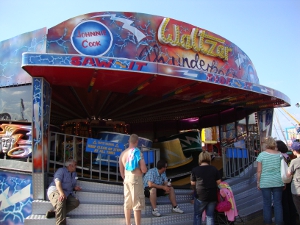 Here’s a snippet to whet your appetite:

The thrum of anticipation had been rushing through my body ever since we’d set off that morning. By the time we passed the sign welcoming us to Hunstanton and made our way into the long stay car park, I was almost delirious with excitement. The worst part was, I had to hide it from my friends. As far as Sophia and Chloe were concerned, we’d just come for a nice, fun, girly day out at the seaside. They had no idea about my ulterior motive. And I didn’t intend to tell them. Until afterwards, maybe. I didn’t want to risk them ruining my master plan, or trying to talk me out of it.

So far, it seemed like everything was on our side. The traffic had been light, we’d got a parking space with no trouble, and the sun was shining. It was a perfect day, and I had every intention of putting a cherry on top of all that perfection. A very sexy cherry.

Sophia parked the car, then hopped out to go and get a parking ticket. Chloe and I got out too, stretching our limbs after being cooped up in the car for a couple of hours.

“So,” I said, tilting my head back to catch the rays of the sun on my face, “what’s the plan then?”

“I dunno,” Chloe replied. “I’ve never been here before, you have. What do you suggest?”

“Well, there’s the beach, obviously. There are amusement arcades, mini-golf, the Sealife Centre, a few shops, the old village…”

I deliberately didn’t mention the funfair. That was my destination, and I wanted to go alone.

Sophia rejoined us and put the ticket in the windscreen of the car. “Got everything, girls?”

Chloe and I nodded, and she checked for valuables before locking the doors. “So, do we know what we’re doing yet? I guess we’ll be led by you, Abigail, since you’ve been here before. Did you say you’d visited with your parents, or something?”

I moved away from the car and started to walk down towards the seafront, though purposely leading the girls in the opposite direction to the funfair. They followed without question.

I nodded. “Yeah. We used to come here all the time for family holidays when I was younger, but now we mostly come on day trips. We last came a month or so ago. I was just telling Chloe what there is to do. There’s the beach, amusement arcades, mini-golf, the Sealife Centre, a few shops, the old village…”

“Ooh,” Sophia said, doing a little jump, “I love mini-golf! Do you fancy a game of that before it gets too hot, then we’ll go from there?”

Chloe nodded her agreement, and I said, “I’ll take you there, ladies, but I can’t play.”

“No, it’s got nothing to do with being crap, Soph. I have a bad back and swinging a club around and doing all that bending is just going to make it worse.”

It was a blatant lie of course. There wasn’t a thing wrong with my back, and I was actually a little gutted not to be having a go on the best mini-golf course I’d ever played on, but missing out was a necessary evil if I was to go through with my devious plan. If it came off, then the result would be a great deal more fun than a round of mini-golf, anyway.

Grab your copy to read more about the Blond God, Finlay, and how he makes Abigail’s knees tremble on the beach! 😉

Find out more about me, er, here!