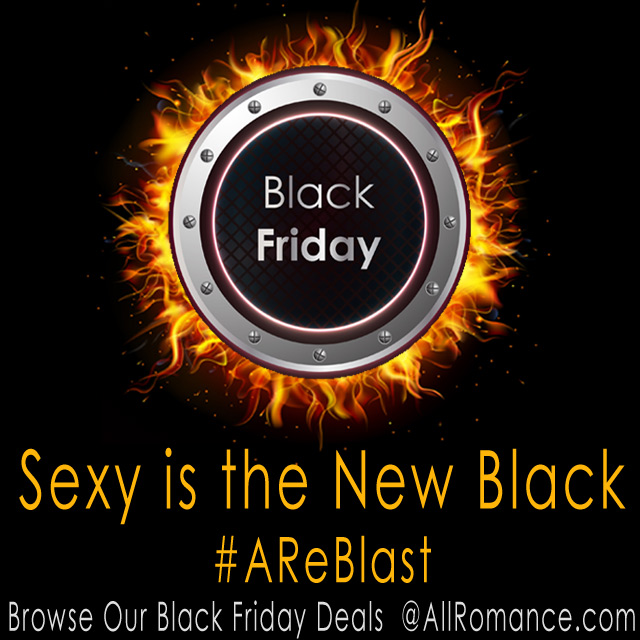 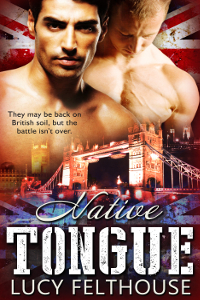 Getting into the Black Friday spirit, Seducing the Myth is FREE on All Romance eBooks until the 30th! So, what are you waiting for? Head over there FAST and grab this free 24-story, 84,000 word anthology.

Want a copy? Visit All Romance eBooks and bag your free copy up until the 30th November. And, most importantly, enjoy!

Seducing the Myth is F*R*E*E

Here’s some information about the book:

So, what are you waiting for? Grab Seducing the Myth now!

Smut at Sh! Hoxton, Erotica 2011 and Men in Uniform 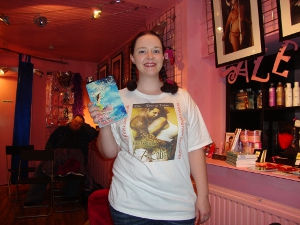 I am still recovering from the craziest, most exhausting and yet totally fun weekend! Yes, it was Erotica 2011 weekend!  The show is on at Olympia, London, once a year and I trekked down from Derbyshire to be there with lots of my author buddies, editors and publishers. Victoria Blisse and I also took advantage of the fact we were already in the area to do a reading at the super Sh! Women’s Store in Hoxton Square on Friday night.

So, Hoxton was the first stop. That’s me, complete with my yummy A Bit of Rough t-shirt and a copy of Seducing the Myth. The OH and I headed across London on the Tube and met Victoria Blisse, her lovely hubby and friend in Blu Bar, just opposite the sexy pink shop of Sh! Then K D Grace, fresh from an exhausting day at Erotica dashed in and met us too. So we chilled for a little while, then headed over the road to see the lovely ladies of Sh! and get everything organised for our evening of smut. 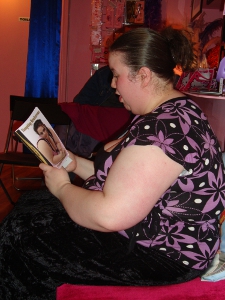 And smutty it was! Fellow Northern Bird Victoria Blisse was launching her new book, Tempting Rendezvous, published by Xcite. Therefore she treated us to some lush excerpts from her tale about rubenesque chick Leanna and her hot American hunk, Joe. It was sprinkled with Victoria’s usual humour as well as the totally hot sex and fab storyline and the audience, including myself of course, hung on to her every word, as well as giggling at the appropriate moments. Ms. Blisse herself struggled not to smirk a couple of times, too, but she maintained her resolve throughout. It was a fun-filled evening, in which Victoria read from Tempting Rendezvous and a recent Xcite anthology we both appear in, The Look of Lust. 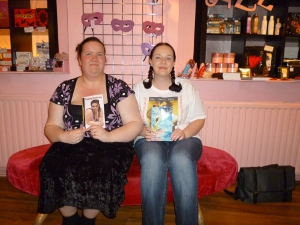 As well as reading, Victoria and I also had some goodies for the attendees, as well as a raffle. We also followed up our readings with a fun Q&A session which included lots of questions, including ones about our favourite genres, our muses, how we got started writing, and whether or not we like Twilight (an allusion to our respective vampire tales). Finally, we signed copies of our books and sent our lovely customers to give the fab Sh! Girlz some cash! Speaking of the Sh! Girlz, they were on fine form as always, making sure us authors and our wonderful audience were well lubricated (with champagne!) and fed. We enjoyed cupcakes, homemade cakes courtesy of Ms. Blisse and homemade Rhubarb & Custard Chocolate Cups and Clotted Cream Fudge courtesy of my skilled OH. Let’s just say there wasn’t much food left over! 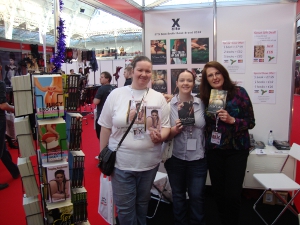 It was then around the corner to The Breakfast Club where more food and drink was consumed, and more fun was had. Our group consisted of myself, my OH, Victoria Blisse, her OH, K D Grace and her OH, who slipped into Sh! straight from work, bless him. The influence of the three erotic writers was obviously enough, though, because the conversation was enough to turn some heads and have us dissolving into giggles on a frequent basis. Luckily, we didn’t get into trouble and were allowed to enjoy our meals and drinks, before paying up and hitting the pavement to make our way back to our respective hotels for the night. It wasn’t a sad goodbye, as it so often is as we knew we’d all be teaming up the following day for more smut-mongering. Hurrah!

And smut-mongering we did. En-route, OH and I bumped into Victoria and her OH at Earl’s Court Tube station, then Lexie Bay and her fella outside Olympia Tube station. Once inside, we hit the Xcite stand, where Hazel Cushion was holding court and sellling smutty books at a very impressive rate. K D Grace soon arrived and there was much posing for photographs and perusing the naughty books, as well as exploring the show in general. 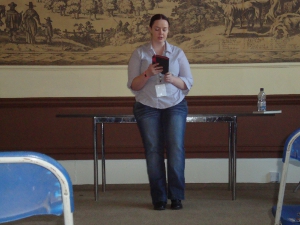 More smutters soon showed up, including Kay Jaybee and Rebecca Bond. Much chatting and catching up was done, but soon it was time to go and do some authorly stuff. The Xcite Reading Slam was held in the London Room, an echoey expanse of room which wasn’t ideal… but still, reading is reading. There we were treated to tales from Victoria Blisse, yours truly, Kay Jaybee, K D Grace, a newbie author who’s name I’ve forgotten and Lexie Bay – who bravely volunteered at the last minute, thusly popping her public reading cherry. Well done on your reading from Immoral Views, buddy! Unfortunately, towards the end there were multiple interruptions from people wandering in and out of the room and sitting down and chatting over the readings which was both rude and infuriating but we all kept smiling! It’s just a good job looks can’t kill 😉 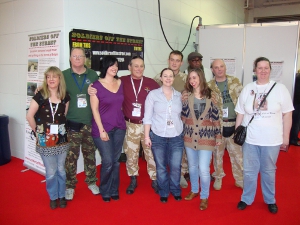 After the Reading Slam, there was an impromptu posing session with a bunch of soldiers. They were there on behalf of the “Soldiers Off the Streets” charity, and I’d already bought a wristband from them earlier in the day. But then I had the bright idea of giving them some business cards with Uniform Behaviour on them, due to the link with charity and helping returning soldiers. Then I had yet another idea for getting the Uniform Behaviour authors in attendance to do a group pose with the soldiers, thus getting some fab photos to help promote our mutual good cause! A good giggle was had by all, though it was impossible to get everyone to look at the same camera at the same time, so I’ve picked the best photo of the bunch! 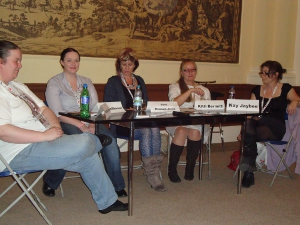 Following our random photo shoot, there was time for more wandering of the show, photo taking, seeing people attired in all manner of clothing, and very little clothing, having a quick peek at the stage show, loo breaks and a mass sit down and drink/eat! All too soon, we were summoned back to the Xcite stand as myself, Victoria and Kay would be appearing on the afternoon’s panel, along with Kitti Bernetti, and chaired by the inimitable Jane Wenham-Jones. We dropped off our bags and respective friends and other halves and sneaked off together to have a quick briefing about what to expect and how things would work, before heading back into the London Room to arrange the room how we wanted it. What followed was a very lively, fun panel which I really enjoyed. It consisted of Jane asking us questions, us asking each other, and also lots of input from the audience. We talked about writing in general, specific genres, pen names, inspiration, getting published and much, much more. 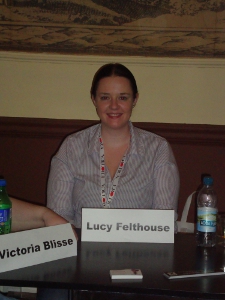 Overall, it was a very good experience with some very interesting questions raised, and answers given. I think everyone on the panel, as well as everyone attending definitely took something away from the session, and you really can’t ask for better than that! After packing away, a debrief was given back at the Xcite stand, and then we all disappeared off for more looking around the show, and some fun photo ops. Me and my fabulous author buddies posed along the “Erotica wall” as we called it and I actually felt rather famous as multiple cameras were pointed at us. Granted, they were all being pointed by other halves and friends, but still! 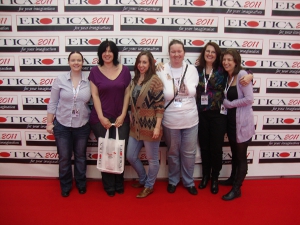 It was a tiny taste of what it feels like to be in demand, and it was good fun. As you can see from the pics, there was lots of giggling going on and I believe at one point we almost knocked the wall behind us over altogether, which would have been an interesting experience! Luckily, we all emerged unscathed, then the rest of the day/evening consisted of a second launch of K D Grace’s super-steamy new novel, The Pet Shop, which flew off the Xcite stand at the speed of light, and more wandering around the show. Finally, we all reluctantly split off to go our separate ways for the night, and myself and my OH ended up in a restaurant in Hammersmith with Victoria Blisse and her OH, enjoying an absolutely delicious meal and more amusing chat, which also included some more plans for world domination. Good times!

All in all, it’s been a fabulous, fabulous weekend for so many reasons. Seeing the Sh! Girlz is always a delight, so a huge thank you to them and the lovely attendees of the reading on Friday night. You all rock! It’s also been great to spend time with people that I consider to be my buddies but I sadly don’t see anywhere near often enough! Geography sucks! Then of course there were the fab events that Xcite let us loose on, and the signing opportunities on the Xcite stand, so a big thanks also goes to Xcite, who also rock. I met some great people too, including a few readers on the Xcite stand, so if you’re reading this thanks for stopping by and saying hi to us all, and of course buying our books. We couldn’t do it without you!

Now it’s time for me to wrap up as this has to be the longest blog post ever – if you’re still here, well done! I end with this:

Link to more photos on Facebook, if you’re so inclined.