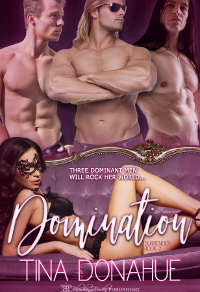 Surrender might be a wanton Malibu club, but it’s hardly fun and games for Jacquie. As the owner’s assistant, she’s all work and no play. That changes when three bad boy rockers scout the lifestyle club as a provocative idea for their new album.

Ready to live, Jacquie offers to be their carnal guide through Surrender, willingly delivering herself to these sexy beasts for an adventure like no other.

Publisher’s Note: This steamy, contemporary, reverse harem romance is intended for adults only. It contains elements of sensual scenes, power exchange, and adult language. If any of these offend you, please do not purchase.

“Guess I was wrong about you guys and what you’d like.” Her words proved steady despite her still-racing heart. “If you don’t want to—”

No one else budged or seemed to breathe.

She wasn’t doing too well on that front either. Upon reaching Max, she cupped his face. Heat barreled through her at his bristly cheeks and size, lean yet muscular, male to the nth degree. Her mouth watered and her heart yearned. She stroked his bottom lip.

He inhaled sharply, his lids fluttering.

So he wasn’t immune to her charms.

Thrilled, she nestled closer, her boobs to his pecs, thighs joined, pussy snug against his rigid cock. Crazy good and reassuring. Nothing on this planet could match him wanting her, except the others doing the same. Feeling playful, she stroked his neck. “You don’t like this? Or this?” She fitted her mouth to his.

She speared her tongue between his lips.

A growl erupted from him, quivering his chest.

Her nipples peaked. She pushed closer.

So did he, wrapping his arm around her, one hand smack on her ass, the other on her throat, lifting her face to his.

Yes, yes, yes! Lost in his male power, she melted against him and suckled his tongue, enjoying his fresh taste, his youth and good health evident.

A more primitive sound burst from him, his embrace intensifying, verifying his need. He pushed her tongue from his mouth and filled hers instead, his desire keeping her from making a sound.

Their kiss turned savage, the kind new lovers indulge in. Yet, an unexpected familiarity made their passion comfortable and safe as if they were also friends.

She’d like that, but wouldn’t push. This was about having fun.

Nerve endings fired, her skin tingling. Time stopped and the world drifted away, only their pleasure registering, his fragrance filling her, his strength encouraging her to submit.

She allowed him to enjoy her as she did the same to him. But she still had Andy and Devlin to consider. Neglecting them wasn’t something she could do.

With more will than Jacquie knew she owned, she pulled her mouth from Max’s.

His lips were damp from her. He panted.

So did she. Leaving him was the hardest thing she’d ever do, but she eased back.

A frown touched his dark eyes.

She cradled his cheek. “That’s only the beginning.”

Devlin caught her wrist, lust hardening his features. “You and I haven’t even begun.” He gathered her to him.

Resisting wasn’t something she could manage.

They fit perfectly. Woman to man. Dom to sub.

He cupped her ass and pulled her against his erect dick, his smile coarse, a male animal in his prime, knowing what a female not only wanted but required.

Never had she imagined a moment like this. Breathing wasn’t possible, thinking hopeless. A pulse beat deep within her pussy, her sex wanting more.

Unable to deny herself, she slipped her arms around his shoulders and parted her lips.

He filled her quickly and well, his tongue plunging as deep as possible, demanding everything she had to give.

Nothing else would do.

They ground against each other, replicating a hard fuck, their hearts beating as one, their heat melding.

He held her tighter, imprisoning her for his desire, a glutton who’d take what he could… while also thrilling her.

The room dipped and swayed, her dizziness increasing. She held onto him, requiring his big body to keep on her feet.

He angled his mouth for greater penetration, his kiss bruising and insatiable, his taste different from Max’s but as fine.

Precisely what she required. Limp yet edgy, she seesawed between the two feelings until her lungs burned. Needing air and to tend to Andy, she tore her mouth free.

Devlin rested his forehead against hers and breathed hard.

Lucky him. She had trouble sucking in any air.

Lightheaded as hell, she staggered from him to Andy. “Hey.”

His smile lit up his face. He stroked her arms. “Hi.”

“We’re talking too much.” She claimed his mouth.

He moaned and eased her close, more romantic than the others, but his hold on her as firm. He wasn’t about to let her go.

Nor would she do so to him. She slipped her arms around his torso and breathed him in, like the love song he penned.

Beer scented his breath. He tasted minty, possibly from toothpaste, his clean fragrance and tenderness undoing her.

His kiss explored rather than demanded, its power as great as Max’s and Devlin’s more commanding ways. She needed both sides of a man, giving and dominant. Andy provided the perfect mixture. The others would too.

Something coiled within her, excitement building, pleasure hardening her nipples and constricting her pussy, heat settling there, creating a dull ache only a man could relieve.

She snuggled closer, drawn to Andy’s hard body, as sinewy as the others’.

He used her mouth well, his desire mounting and growing wild, their kiss rough and greedy, his hand on her breast, hers on his tight ass.

Too much and not enough, the contradiction overwhelming, depleting her strength.

She sagged against him, unable to support her weight.

He finished their kiss and stroked her back, her face to his neck. She licked it.

His chuckle rumbled in his chest. “You good?” 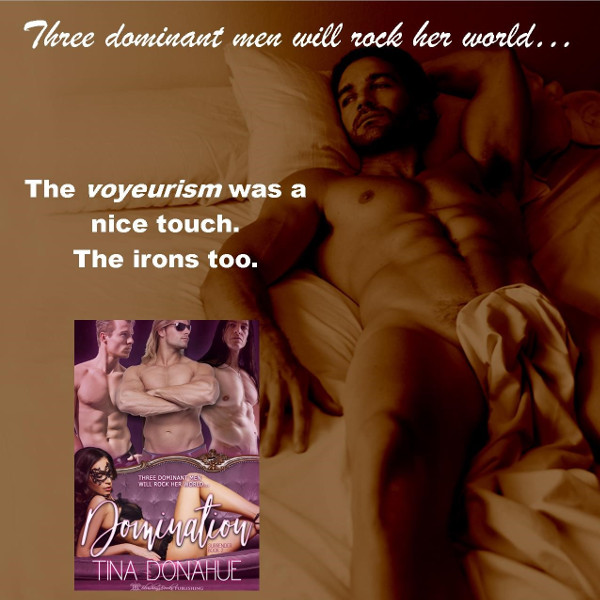 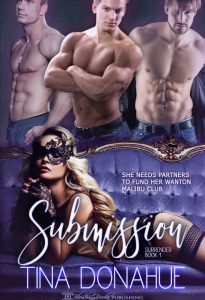 Surrender is the lifestyle club where professional women seek alpha males to dominate and pleasure them. A concept Bree envisioned from the moment she fled her impoverished past. However, dreams don’t come easy. To fund her wanton Malibu club, she needs partners.

Enter Lucius, Tav, and Cody, three wealthy and imposing males who know what they want and that’s Bree, stripped and submissive to their will. Bad boy Lucius has billions but what’s money when the right woman isn’t at his side to pleasure him sexually, while he uses her in the most provocative ways. Laid-back Tav isn’t so easygoing between the sheets, his dominance irresistible. Cody’s an adrenaline junkie, enjoying extreme sports in and out of bed.

Hot and kinky play is on the sexual menu, pulling Bree deeper into a shameless fantasy that can’t possibly last. Until and unless she’s willing to offer her heart.

Lucius pressed close, his thighs to hers, his hand cupping her neck. “Like this?”

He captured her mouth, their lips fitted perfectly, his bristly cheeks scraping hers, tongue plunging inside.

Gawd. She sagged against him, powerless to resist his strength, scent, and taste. Something minty but also unique, a flavor belonging to him alone.

She gripped his lapels, needing them to keep steady and to get closer. The moment she had, she ground indecently against him.

A breath couldn’t have slipped between them, her breasts crushed to his chest, not allowing her to inhale fully.

Who the hell needed air?

He deepened his kiss, taking rather than asking, using, enjoying, his roughness a thrill rather than something to worry about, and precisely the behavior she required.

Yet she still desired more.

Once she pulled the leather tie from his hair, she drove her fingers through his thick, silky locks.

A lusty grunt rose from deep within him.

He tempered his passion, gentling the kiss.

That was awesome too.

They enjoyed each other as she’d wanted from the moment they’d met, her feelings for him building each time he smiled at her or they shared laughter she’d tried to avoid, their friendship deepening despite her attempts to keep an emotional distance. During those empty days when she’d denied herself physical contact, she never would have believed a kiss could be so wondrous.

The world faded away, sounds retreating, leaving them clinging to each other, savoring closeness and intimacy.

Wasn’t enough. If possible, she would have crawled inside his mind, heart, and soul. Barring such nonsense, she stopped herself from coming on too strong.

He struggled for breath, the same as her, then pulled his mouth free and gulped air.

Lucky him. She couldn’t draw in enough to clear her head.

Tav slipped his arm around her waist and pulled her into him.

Whatever air she’d taken poured out and mingled with his, his mouth on hers, tongue slipping inside, his beard rasping her skin.

Her knees sagged, bumping into him, his fresh, woodsy scent surrounding them, bringing to mind a forest, reclining on fragrant grass, leaves floating down, sun winking through countless trees to bathe their naked flesh.

She wreathed her arms around his shoulders, wanting him as a shelter against doubt and everything bad.

Holding her in a firm but gentle embrace, he angled his mouth for greater penetration, his passion as deep as Lucius’s, yet also carefree. As if necking with her here was the most natural thing in the world, even though she’d kept her distance when they’d worked together. Not once sharing a meal unless they bumped into each other at lunch in the employee break room.

Those times had prepared her for now, their intimacy exciting yet comfortable and necessary.

Unable to resist, she pushed his tongue from her mouth and filled him instead.

Rather than protest, he allowed her to enjoy his clean flavor and suckled her deep.

She hadn’t expected anything less from him. Tav took life as it came, greeting whatever was in his path. For the moment, she was his sole focus and wouldn’t have wanted it any other way.

He eased her closer, his strength impressive yet subdued. His effort at containing it, making him tremble.

She wanted him as unleashed as Lucius would be.

He separated her from Tav.

Cody shrugged. “You are now.” He grasped her wrist.

Surely, he wasn’t going to kiss it. He’d never seemed the romantic type to her.

After he’d trapped her against the wall, he held her wrists above her head and cupped her breast.

Her nipples peaked, straining against her suit jacket.

He thumbed one rigid tip, his lime fragrance and sweet breath stoking her desire.

She wrapped her leg around his and pressed against him.

“I know.” He brushed his lips over hers, their softness and heat striking, his smooth cheeks a balm, his tantalizing foreplay increasing her excitement.

Whoever thought wild monkey sex was the only way to go for a good time hadn’t experienced this. 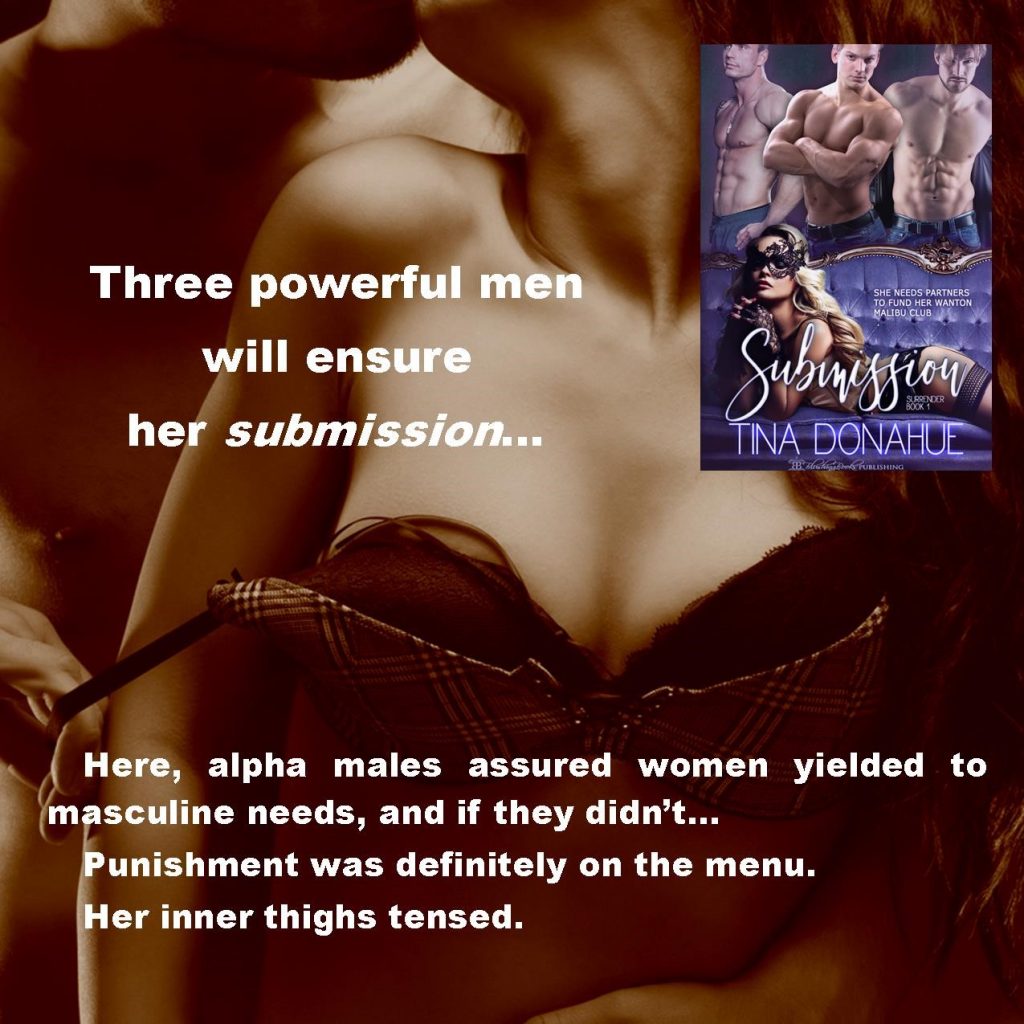