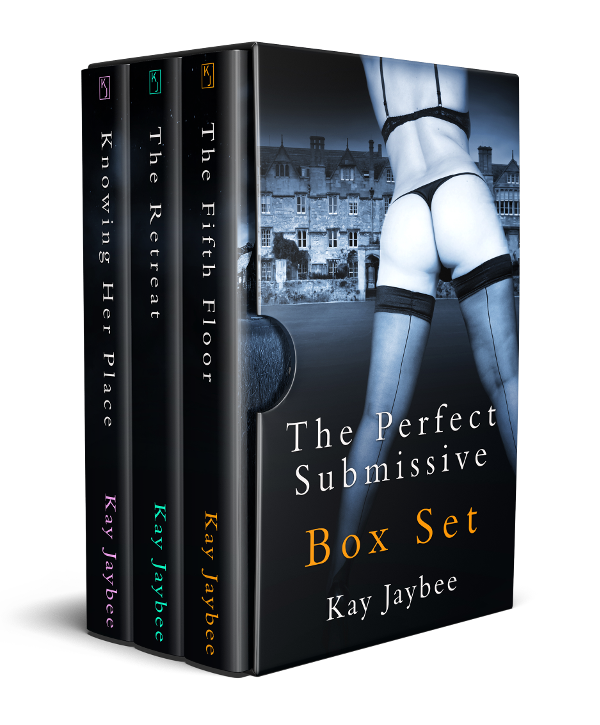 “Readers, hold on… it’s a crazy ride. If you like your erotica dark and dirty, then this is the book for you.” –The Romance Reviews

Hidden on the fifth floor of the Fables Hotel’s respectable facade, five specially adapted rooms wait; ready to cater for the kinky requirements of its select guests.

When Mrs Peters, the mistress of the hotel’s exclusive entertainment facility, meets the new booking clerk, Jess Sanders, she recognises the young woman’s potential as a deliciously meek addition to her specialist staff. All it will take is a little education.

Desperate to return to her submissive life on the fifth floor, Jess finds herself trapped. David Proctor wants to keep her for himself…

“…The characters are fascinating with a depth that you don’t get often. They each have various facets to their personalities that make them unique and realistic. They are compelling and one moment you will love them and the next moment hate the same character.  This is true throughout both books as we are introduced to new characters in The Retreat…Kay Jaybee does a great job of involving us in the plight of various characters  especially the  main character, Jess…”  – Illustrious Illusions.

Desperate to see Mrs Peters, Miss Sarah, and the Fables Hotel again, Jess discovers she can win her freedom is she agrees to go on a specialised quest.

With a list of five unknown addresses in her hand, the submissive is driven from The Retreat in Scotland towards England.

With no idea of what or who awaits her at each stop, all Miss Jess Sanders can do is hope that her journey will eventually take her back to the fifth floor, where she truly knows her place… 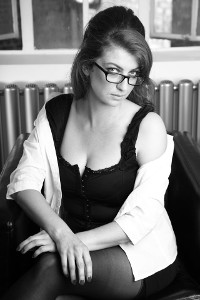 Thank you for inviting me over today to tell you about the re-launch of The Perfect Submissive Trilogy.

It is with great excitement, that I can announce that Book One of the trilogy, The Fifth Floor (previously The Perfect Submissive) has been re-edited, recovered and re-released! 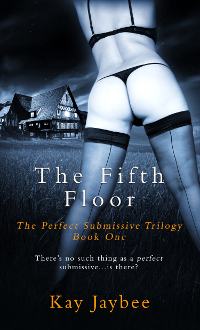 Hidden behind the respectable façade of the Fables Hotel in Oxfordshire, five specially adapted rooms await visitors to the fifth floor.  Here, Mrs Peters is mistress of an adult entertainment facility pandering to the kinky requirements of its guests.  When she meets Jess Sanders, she recognises the young woman’s potential as a deliciously meek addition to her specialist staff.  All it will take is a little education.

Meanwhile, Mrs Peters is temporarily distracted from her intimidating rule over Fables’ fifth floor by artist, Sam Wheeler – who she believes can help her in her mission to transform Jess into the perfect submissive…

What is it that makes someone want to be sexually subservient to another? Why do so many people enjoy the total removal of their free will? Even within the bounds of fantasy rather than reality, the concept of becoming a sub to a more dominant partner is extremely popular.

I honestly can’t answer these questions- for one person’s reason for living a submissive lifestyle will be totally different from the next. What is important however, is that the relationship of a sub and a master or mistress has to be based on trust- without that, then the system simply does not work.

The notion that she wants to be a sub, is one that Jess Sanders has to learn come to grips with very quickly as she enters employment at the Fable’s Hotel…only will she begin to realise how important trust is…

Not long after her employment as a booking clerk at The Fables Hotel, Jess witnesses the willing subjection of fit healthy young men – the first step towards Jess becoming the submissive assistant Mrs Peters wants her to be.

Crossing the threshold of the room, into which she was being firmly steered by the elbow, felt like entering another world to Jess, or rather, another time. Manoeuvred towards a plush red velvet chaise longue, her eyes darting here and there, the clerk was pointedly sat down.

Trying to ignore the light but persistent pressure of Mrs Peters cool hand against her wrist, Jess took in the reproduction William Morris wallpaper, the heavy dark-wood chest of drawers, the floor to ceiling bookshelves, and the faded brown leather wing-backed armchair. Centre stage, only a few metres from where they sat, was a huge writing desk. Its top was inlaid with a square of leather, a portion of which was covered with blotting paper, an accompanying ink well, pots of ink, and nibbed pens.

Jess was reminded of a museum she’d once visited as a child, where rooms from a variety of different houses had been re-created from a number of historical periods. This room had Victorian study written all over it.

The silence was beginning to get to her as she waited, perched rather than sat, on the unyielding seat. A faint voice of hope at the back of Jess’s head kept telling her that all this had to be some sort of practical joke, but one glance at Mrs Peters made her reconsider. She couldn’t prevent her eyes from drifting towards the study door. Whatever she had been brought here to witness surely couldn’t begin until someone came in. Twenty seconds later, each one ticked off by the hammer of Jess’s heart beating, the door swung back with a confident push.

‘Ah, Miss Sarah,’ Laura rose from her seat, a stern glare at Jess telling her not to move. ‘I hope you don’t mind, but Fables has a new member of staff, and I thought it would be a good idea to let her observe one of our sessions.’

Miss Sarah, her face powdered to an ultra-pale complexion, her curling hair pinned up in the style of a Victorian lady, her exquisite outfit historically accurate down to the small white buttons that fastened her stylish black boots, curtsied at once to her superior, ‘Of course, Mrs Peters.’

The stunningly slim woman glanced briefly at Jess, her grey gaze only lingering long enough to acknowledge the stranger, without taking in what she looked like or who she might be. Miss Sarah’s indifference, dismissing the office clerk as an unimportant factor in the room, made Jess feel smaller and more anxious than ever.

The agonising lull continued and Jess’s imagination ran riot as Miss Sarah sat at the desk in preparation for her client’s arrival. Images of pock-skinned overweight men, panting loudly as they fucked the employees of the fifth floor against the furniture made Jess’s stomach churn, but there was no way out. With a quiet determination that Mrs Peters would have been surprised to know Jess possessed, she thought, if the other members of staff here have survived this part of the tour, then so can I.

As Mrs Peters returned to both the chaise longue and her application of gentle restraint against the clerk’s arm, Jess’s body stiffened. Someone was knocking on the door. Not daring to face her employer, Jess focused on the figure that, after being granted permission to enter, walked meekly into the study.

If he hadn’t had his neck bent, his face to the floor with respect for Miss Sarah, who greeted him with a sharp ‘Good Morning’, Jess judged he would have been quite tall. And he was young; not the sweaty, aged bank manager Jess had conjured up in her head, but a man in his late 20s or early 30s, with a shaven face, short spiked ginger hair, and well built limbs. He was dressed as a servant, perhaps a stable hand. Jess was automatically reminded of Lady Chatterley’s Lover. Gulping against her dehydrated throat, unwilling to see the sex that she was sure was about to follow, the clerk dropped her eyes, only to have her chin roughly jerked upwards by Mrs Peters, ‘No, child. You will observe. You will learn.’

A patina of panic gripped Jess. Every hair on the back of her neck stood to attention. Until that moment it had been unreal. She hadn’t let go of the hope that at any minute someone was going to turn around and say, ‘OK, Jess, it’s just a joke. We play it on all the new girls. Let’s grab a coffee.’ No one did though. No one was saying anything.

The suffocating quiet of the room was broken by the newcomer, who apparently totally oblivious to his audience, was pressed to his knees by Miss Sarah. His head lowered, he was left where he was as the lady sat in the wing-backed chair, her back straight, her chin tilted, her clear eyes filled with disdain as she studied her supplicant.

Jess tried to turn her head away for a second time, but again, had it sharply wrenched back to the scene unfolding before her. She felt hot despite the general chill of the room, and wished she could take off the thick jumper that was so essential in her cold little bookings office.

‘Yes, my lady.’ The words were spoken with humility, but Jess heard every word. It was like being in a theatre watching someone dictating well rehearsed lines.

‘I believe I’ve had to speak to you before about your time keeping. Twice before in fact.’

‘I’m afraid that, as this is not the first time there has been cause to reprimand you, the punishment will be more severe this time.’ Miss Sarah didn’t sound afraid at all. Her cut-glass voice sounded triumphant as she towered over the man, who seemed to be getting smaller, as if he was shrinking against her tone.

With a rustle of the petticoats hidden beneath her bust hugging dress, Miss Sarah turned from her client and began to search through the desk drawer. Jess held her breath; positive she knew what Miss Sarah was searching for. It has to be a wooden ruler. Jess had read enough erotica to know how these scenarios went. It was almost text book.

It briefly crossed her mind that she should have been disappointed; but the hardening of her nipples told her otherwise, as did the tell-tale twitch beneath her skirt. Determined to keep her unbidden arousal secret, Jess privately admonished herself for being so susceptible.

She averted her eyes from the woman at the desk, but Jess couldn’t bring herself to turn them from the manservant. He captivated her. So strong, so masculine. What makes him want to come here and be controlled like this? Why does he pay to be humiliated?

‘It’s fascinating, isn’t it?’ Mrs Peters seemed to be reading her mind.

Jess felt goose pimples sprinkle her flesh as her employer continued to speak in whispers, her warm breath tickling Jess’s ear, ‘He’s a strong young man. He is good looking. He could dominate any girl he chose, and yet here he is, getting his rocks off by crouching in obedience before a powerful woman.’

Jess opened her mouth to speak, but no words came out. She didn’t know what to say; or even if she was permitted to speak. Instead she flicked her attention back to Miss Sarah, who’d finished her deliberately protracted hunt through the desk, and now held, not a ruler, but a short handled white whip. 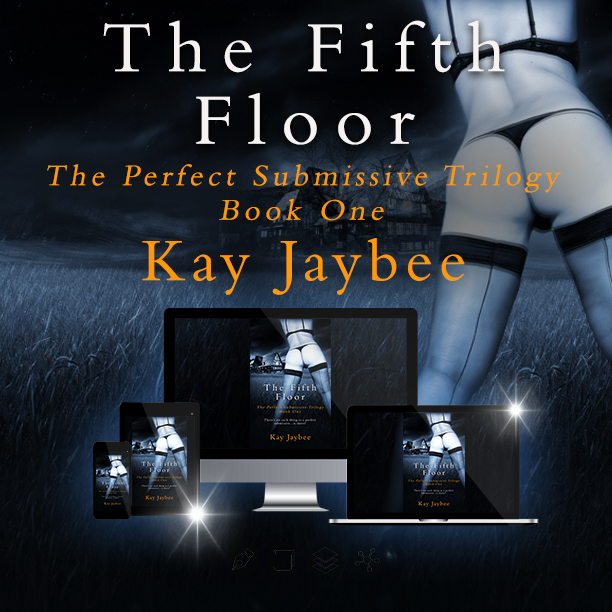 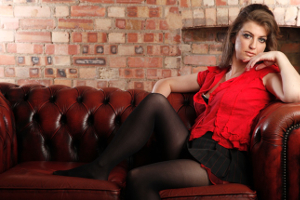