A Tale of Two Cities

This blog post is hugely, hugely overdue, but things have just been crazy lately. They still are, but I’m writing this post regardless. So… a tale of two cities. Yes, within the last month I’ve been to Rome and London. Quite the jetsetter, aren’t I? Okay, I didn’t fly to London. That would be ridiculous, given I’d be hanging around in airports for longer than it would take me to drive. But, nevertheless, I have graced (*sniggers*) both cities with my presence of late. And although it has nothing to do with writing, I know my fellow travel lovers will probably be interested. So here goes…

I only had three full days in Rome (the days either end were mainly spent travelling), but still managed to pack quite a bit in, and according to the pedometer App my other half installed on his phone, we walked 20 miles in three days. No wonder my feet hurt! 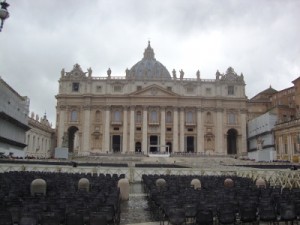 Tuesday – Headed to The Vatican Museum (which was a smart move considering the crap weather). Spent many, many hours exploring, and bemoaning a lack of places to rest. Giggled in the Sistine Chapel at the members of staff going “Shhhhhhhhhhhh!” as loudly as possible – much louder than the noise anyone else was making. Wasn’t the only one leaving the Sistine Chapel and wandering through subsequent rooms saying “Shhhhhhhhh!” Headed out into the rain, then back around the outside of the enormous walls of the city within a city (okay, I technically could have called my blog post a tale of three cities. But it doesn’t sound as good) to St. Peter’s Square and St. Peter’s Basilica. Enjoyed pretending I was in Angels and Demons, checking out the tiles on the floor that Robert Langdon uses to solve one of the puzzles. Fortunately, there were no dead people – prefiriti or otherwise – anywhere. Explored the basilica, wondering how I was getting away with spending so much time in holy places without being struck down, saw my first ever Swiss Guard (yes, they really do dress like that!), and then headed back to our accommodation. The marble floors throughout the Vatican, and the hard pavements are really not kind on feet. 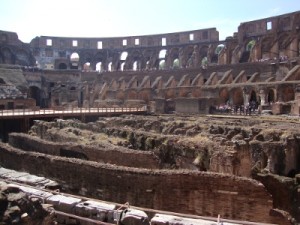 Wednesday – sunny, hurrah! Very fortunate, since the Colosseum was our first stop, and the place doesn’t have a roof. Breezed right through the queue thanks to our Roma Passes (seriously, if you go, and are visiting more than one place, get one. It’s worth it just to skip the queues and includes Metro and bus passes) and stepped into…. awe. The place is huge, as you’d expect, and despite the crowds, it still seems to have an atmosphere about it. We spotted lizards zipping about the place, eavesdropped on a tour guide and gleaned some information, took loads of photos and generally just wondered what it would have been like back in the day. Not such a  nice place to visit, I imagine. 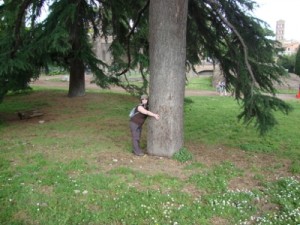 When we were done, we headed across the road to the Roman Forum (skip the queues using your Roma Pass again) and Palatine Hill. Again, the place was just incredible. It’s a mish mash of old homes, churches, political buildings, gardens, and much, much more. We spent a good couple of hours here and didn’t see it all. If you’re really interested in ruins and things, you could probably spend a whole day here. Also paused to take a photo especially for Bronwyn Green. See, the tree. As it was, we were hungry and knackered, so we cried off and headed for much needed nourishment… at The Hard Rock Cafe. Yes, it was a little out of our way, but close enough to our next destination to make it worth the detour. My beloved needed the t-shirt for his collection, I needed to eat something that wasn’t pizza or pasta, and we just needed to sit down (argh, the feet!). 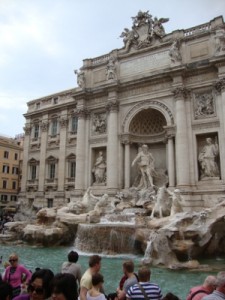 No further words are necessary for The Hard Rock Cafe. Okay, maybe a few. Burgers, memorabilia, very full up. Next stop, The Trevi Fountain. Managed to get there despite vagueness of map and some Italian roadsigns which were pointing the wrong way. Risked life and limb crossing the road (try and avoid crossing the road in Rome. Seriously.) and finally emerged into a square packed full of people. Turned around to see what they were all looking at. There it was! Way more impressive than I was expecting, The Trevi Fountain is so much more than a fountain. I was expecting water squirting out of the ground. But no, this thing takes up the entire backend of a huge building and is just a piece of art. You really have to see it to believe it. Or look at my photos on Facebook. 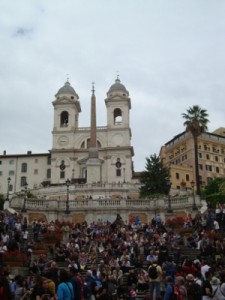 Next stop, The Spanish Steps. More guesswork involving my map and sense of direction. And we got there, hurrah! Came out at the top of the steps and looked down. The view itself is not particularly impressive, but the steps are, and I found myself comparing the area with Montmartre in Paris. It seemed very arty and had a very laid back, bohemian feel to it. OH and I walked down the steps to see the view in reverse, lots of photos, then climbed back up the steps. Big mistake! If you head towards the Metro station from the bottom, if you go to the right, there’s a lift that takes you up to the top of the steps. Wish we’d known that before, especially since the Metro station is at the bottom, so we climbed the steps, only to get the lift back down. Rather dull, I know, but you’ll thank me for that piece of information if you’re ever there.

From there, back to accommodation. Just as knackered as yesterday, possibly more so. 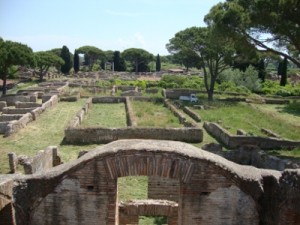 Thursday – sunny again, whoop! Didn’t go into the city, but at the recommendation of K D Grace, headed towards the coast and Ostia Antica. OMG. It’s an ancient Roman settlement which used to be on the coast, but due to shifting rivers and falling ocean levels, it’s now inland. Anyway, it was absolutely fantastic. Spent literally hours exploring the place. There’s very little of it you can’t access, and we climbed up steps, stood on buildings, saw complete mosaics, the amphitheatre, bath houses and tons of lizards (sorry, I love lizards). Think I probably scared some people at one point when I smacked my head really hard and turned the air blue, then almost threw up. Luckily my OH was on hand to kiss it better. And my head *sniggers*. Basically, many hours, many photos. Also covered by Roma Pass, and easy to get to using public transport. A brilliant time was had by all.

Sadly, my Roman adventures end here. I’m glad I saw Ostia Antica, despite the fact it meant sacrificing another day in the city. But I’ll go back again some time and see all the other things the place has to offer. I took away lots of photos, experiences, and at least three story ideas, so it’s all good! 😉 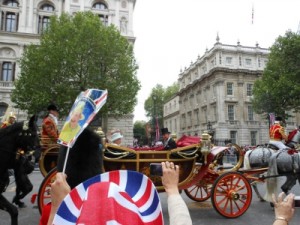 Visited to take part in some of the celebrations for the Queen’s Jubilee. Monday night, headed to Hyde Park to watch the concert on the big screens. Pretty good, not all the music was to my taste, but it stayed dry, there was a fun atmosphere and then we ran away before Paul McCartney started making a noise. Tuesday, went to stand on the streets to wave at the Royals as they headed past in their carriages up to Buckingham Palace. Ended up standing pretty much opposite Downing Street. Plenty of men in uniform kept me entertained, while the appearance of one of OHs favourite female newsreaders did the same for him. All the standing around waiting was broken up by an arsehole of a “Cockney Geezer” deciding to pick a fight with me, then getting seriously narky because I stood up for myself. He then pissed off to the pub, leaving me smug, but still with achy feet and knees. So much standing. 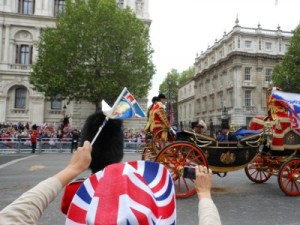 But… it was worth it! Saw The Queen and Prince Charles with his horse (also known as Camilla – the American girls standing in front of us did not like Camilla), then the lovely Wills and the gorgeous Kate (she really is gorgeous. Hate her. LOL), along with my future husband, Harry. Hey, Wills was my first choice, but he’s taken now, so Harry will have to do. Think him and his mischievous ways would probably suit me better, anyway. 😉 As soon as they passed by, we elbowed our way through the crowds. Some genius decided it would be a good idea to close Westminster Tube station (note for next time guys, why not just station police at the entrances and let a few people down at a time?) so we had to fight our way across Westminster Bridge and use Waterloo station. Back at our accommodation, we got in just in time to see the Queen on the balcony. Headed out to our own balcony to see the fly past in the distance, then quickly back inside again to see it on TV. Then time for some chilling out, some delicious food (OHs aunt is an awesome cook) and back up north.

So, that’s it! Two cities in less than two weeks. All those crowds, and smelly rude people, and I didn’t kill anyone! Aren’t you proud? 🙂