It’s time for another Sunday Snog, yay! This week, I’m sharing a snog from my short story, Trespassing, which appears in the M/M anthology, Boys Will Be Boys. I looooove that cover, don’t you? 😉

Instead of replying, Ben pulled off his hi-vis vest and t-shirt, dropping them to the carpet. They were quickly joined by his shorts and boxers, and Jack couldn’t prevent his gaze from dropping to the other man’s cock. His own throbbed almost painfully, and his mouth watered. He wanted to taste that cock, to touch it, to feel its hardness and its heat…

Sitting on the double bed, then scooting back up to rest on the pillows, Ben beckoned to him. “Get naked and come here.”

Grabbing his nervousness, screwing it up and shoving it to the very back of his mind, Jack did just that. As Ben pulled him gently into his arms and began kissing him again, he knew he had nothing to worry about. He was in good hands.

Their bodies pressed together, cocks brushing against each other, straining, leaking pre-cum, eager to be touched. But there was no rush—right now, kissing was all that mattered. Parted lips, heaving chests, thrusting tongues… Jack had never felt anything like it before in his life, and already he knew he was going to get addicted.

Gaining a little confidence, Jack let his hands wander. He tangled them in Ben’s hair, cupped his face, stroked his throat, his pecs, the ridges of his abdomen. Exploring further, he reached around and cupped a pert buttock, the skin smooth, but the muscle beneath firm and ripe.

You can get your hands on Boys Will Be Boys here. 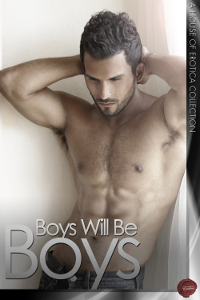 Apologies for the speedily written post, but this one crept up on me. I knew the release of Boys Will Be Boys was imminent, but it popped up at retailers today so I hopped on here to tell you all about it.

I loved writing Trespassing, my story in the anthology. I had lots of fun writing two gorgeous guys, a forest and a cute cottage. And I still swoon every time I look at that cover 😉

P.S. Stop by here on Friday for more some more m/m goodness from yours truly… 😉