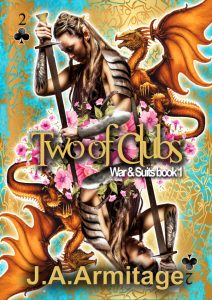 Fifty-two weeks, four royal families, one war. Week one – January 1st – January 7th Rose (The Two of Clubs) is the youngest of all the Royals of Vanatus, and she has a lot to prove. Born a princess, but with the heart of a warrior, she struggles to keep her two lives separate. By day, a perfect princess, but in the dark of night, she slips out to practice being all she ever wanted to be, a warrior like her brothers. When a dragon kidnaps some children from the royal castle, she must act quickly, but the snap decision sets off a chain of events that lead to the first war in the history of Vanatus, spelling disaster for both her and her family. Follow the lives and loves of the fifty-two members of The Houses of Club, Heart, Diamond and Spade in real time as they struggle to maintain peace in the world of Vanatus. This is a New Adult fantasy series set over the course of one whole year. This particular book is the first in the series and is set over the first week from New Year’s Day to 7th January from the eyes of Rose Club. Each book in the series will be shown through the eyes of a different character, all within the world of Vanatus. Each book can be read as a standalone book (no cliffhangers), but the overall arc of the war will play in the background throughout. This is New Adult so there will be some swearing, mild violence, and sexual references.

The Hearts, Diamonds, and Spades were supposed to be kept to the nicer parts of the castle. No one was supposed to see the kitchens. Not that I suspected the sleeping Heart girl currently wrapped around my elder brother actually cared what the state of the kitchen was. Still, our father, the King, would be upset that someone from one of the other clans had seen that we weren’t the perfect royal family we proclaimed to be and that we did, in fact, have messy kitchens – very messy this morning. Who would get the blame for this? Not Tarragon, that’s for sure. Tarragon was only the Four of Clubs, but he was one of Father’s favourites. I, on the other hand, was the lowliest of all. As the Two of Clubs, I ranked only slightly higher than the mice that sometimes frequented the kitchen despite the hard work of Fluff, the palace cat.  And it was I who would get the blame for this.

I glanced at the Heart woman. Usually, you could tell a Heart from the clothes they wore, the most ridiculous ‘high fashion’ which usually consisted of a lot of lace, tulle, feathers and leather, but as I couldn’t see the rest of her, I guessed that she was completely naked under the heap of coats. She was unmistakably a Heart, though. Even with a lack of clothes, I could tell. Red hair fell in waves down the flawless porcelain skin on her naked back. She looked perfect and sensuous in every way, another rather annoying trait of The Hearts. They just didn’t have bad hair days!

“Oy,” I whispered to my wayward brother. The drill-like snoring turned into a grunt so I stuck a toe in his side.

“Wha…? Oh, it’s you!” He actually closed his eyes again, pretending to fall right back asleep. He was in for a shock if he thought I was going to leave him here.

“Will you get her out of here, please? I have to clean the kitchen to get it ready for the cooks.” I might have been the lowest member of the family, but I’d developed into someone my mother described as ‘a wilful child’ and my father called ‘a pain in the ass’. Tarragon knew he had no chance of being left alone with his new plaything.

“What time is it?” He opened his eyes again. His chin was damp with dribble, and he had streamers still weaved through his hair like a multicoloured wig. I couldn’t resist giving him an eye roll.

“It doesn’t matter what time it is. If father catches you with her, there will be hell to pay, and I don’t want to be involved. Why did you bring her down here anyway? She could be a spy.” Unlikely, as she’d actually been invited to the castle along with the rest of her family. And unless The Hearts had a secret desire to learn how much kitchen cleaner we used (not a lot it seemed), then the chances of her being sent down here to spy were slim. Still, Tarragon didn’t need to know that.

“Why do you think I brought her down here? Can you not see her? She’s gorgeous.”

I scowled. His complete disregard for the rules irritated me. It didn’t matter how beautiful the woman was, she was still a Heart and therefore completely untrustworthy. If her father caught them together, well, it didn’t bear thinking about.

“She’s a Heart!” I stated the obvious, knowing that Tarragon was fully aware that she was a Heart, and that was more than likely the reason he’d bedded her in the first place.

“Isn’t this whole party thing to get the clans together so we can cooperate and live in a peaceful land? This is why we all come together at this time of year.” He gave that leisurely grin that women of all races seemed to fall for. It wasn’t going to work on me, though. I was mad!

“Yes, but I don’t think that you are supposed to come together quite so literally!”

“Or quite so many times,” grinned Tarragon.

Born in a small town, J.Armitage longed for adventure and travel.
Age 20 she moved to Dublin, then to San Diego, then Sydney and back to California where she did a brief stint working at Universal Studios being a minder to Sponge Bob.

Once back in Britain she got married, had babies and decided to write about the adventure she was now missing out on. She works full time, is a mum to three kids and has had a surrogate baby.

She has skydived twice (and survived), climbed Kilimanjaro and hiked to the bottom of the Grand Canyon. She has also worked as a professional clown and banana picker amongst other jobs.

Somehow she finds time to write.

Reviews for J.A.Armitage’s work.
Endless Winter is a unique story that takes place in a beautiful world. J.A. Armitage’s writing is lyrical and almost poetic. Janelle Fila for Readers’ Favorite

I devoured this book like a rich box of chocolates. Sara C Roethle

The idea behind Two of Clubs

There are fifty two weeks in the year and the same number of cards in a deck. I thought it would be crazy to write one book for every week of the year. Each one is a different character, named after a playing card, living in the same world and through the same war that plagues the fictional world of Vanatus. Each chapter is a day. Eventually, I hope to have 52 books released comprising of 365 chapters so you can read a chapter a day for the whole year 🙂

I don’t think anything like this has ever been done before. If 52 books sounds daunting, each book is a separate story and has an ending. They are standalones, if you will, but with the arc of the war playing in the background throughout.

I hope you enjoy 🙂

Here are the links to Two of Clubs, plus some of the following books which are available on pre-order