These amazing romance authors have been hit by cupid’s arrow and are offering you their sweet or spicy romance book FREE for a limited time! 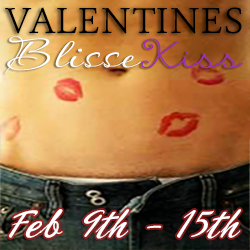 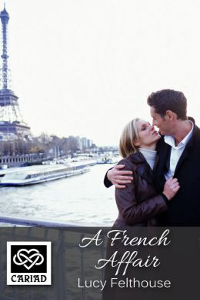 It’s nearly Valentines Day – so you know what that means, don’t you? An extra special Sunday Snog – Valentines BlisseKiss! This is a week-long snogathon with smouldering kisses, fantastic stories and prizes to be won. I’m delighted to be taking part. So, in honour of this event, I’ve chosen one of my most romantic snogs, from A French Affair. Enjoy, and don’t forget to scroll down and check out the prize details.

“Yes, I’m positively quaking in my boots,” Sydney replied dryly. “But thanks anyway, I feel much better knowing you’re looking out for me.”

“I’m doing more than that,” he said quickly.

“Yeah. I’m wishing I could kiss you.”

“Why not? It’s pretty romantic.”

“But people will see.”

“No one will care. This is Paris—they’re all smutty and sex-mad.”

“Really? In that case, that would be lovely.” She twisted her upper body to face him, leaning to meet him halfway. She kept her eyes open a little while, wanting to see his expression, but he quickly got so close he grew blurry, so she squeezed her lids shut. Opening her mouth slightly, a thrill ran through her as she felt his breath against her lips, then finally his mouth on hers. It was tentative at first—she remembered he was as out of practice as she was, even more so in fact—then he clearly grew more comfortable, more confident. His gentle movements grew more passionate, his lips taking hers as though he wanted nothing more in the world than to be kissing her. She certainly hoped that was the case, as it was the way she felt.

He reacted by kissing her harder, his tongue slipping sensuously against hers, doing a little dance and exploring every sensitive millimetre of her mouth and lips. She was in serious danger of melting into a puddle of lust and being soaked up into the Parisian soil beneath them. Determined to hold her own, she kissed with as much fervour as he, forcing his tongue back into his mouth with hers and returning the favour.

Soon, she became horribly aware that if they continued, they’d be likely to get carried away and end up being arrested for indecent exposure.

You can bag yourself a copy of A French Affair here.

Also, don’t forget to head back to Valentines Blissekiss and see what other luscious lip to lip action other authors have posted and enter to win more awesome prizes.