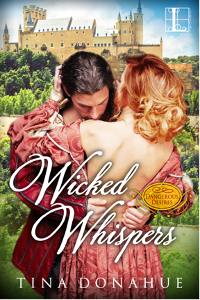 As the Inquisition gains force, even the faintest rumor can brand one a heretic. In this world it is Sancha’s gift–or curse–to be blessed with the gift of healing. But the villagers are in need of her arts more than ever, and she feels it is her duty to help them at the risk of losing her life. And at the sacrifice of her heart…

Enrique has never wanted a woman as he does Sancha. Determined to have her love, he woos her with exquisite passion, giving her refuge to pursue her healing in secret. But their very desire and escape from the ruthless forces of the world may be their undoing. And together, they must pit themselves against a jealous rival and archaic tradition to secure their place in a hopeful new dawn…

Buy Links (available for preorder – ready to read May 24):

Her lips parted. She leaned into him rather than pull away.

Surprised and delighted, he brushed his lips over hers, astounded at their silky heat. Her breath smelled sweetly of orange, her usual rose fragrance mingling with a hint of musk. Her excitement as a woman.

He eased his tongue inside her mouth and waited for her response, praying she wouldn’t move away at his bold move.

A soft, wanting sound poured from her. Sagging against him, she gripped his doublet and used his garment for support.

He wrapped his arm around her waist, holding her tightly to him, his thickened shaft snug against her mound. She stilled for a moment, then suckled his tongue, her need of him obvious.

This was heaven, the only reason to be alive. These moments would change everything between them. He’d claim her and she would be his for a lifetime.

Dizzy with joy, he deepened the kiss, working his fingers past her dark green caul and through her hair, caressing tresses softer than fur.

She clutched him more tightly, her mouth wanton and willing beneath his.

Exactly how he’d hoped their first moments alone would be, though still falling short of what he had to have. He cupped her breast, testing its weight and warmth, savoring her nipple pebbled against his palm.

He tempered his passion and caressed her more gently.

She tore her mouth from his and pulled away.

He’d frightened her. Fool. He should have known better and did now. Despite his arousal, he remained where he was and dropped his hand to his side.

Sancha breathed as roughly as he did. She touched her mouth still damp from his lips on hers. He expected her to turn and run.

She cupped his face and claimed his mouth, driving her tongue inside.

He suckled her greedily. She returned his kiss, both of them pushing against each other to get closer. Unable to, Enrique wanted to howl in frustration. She moaned softly then pulled away again. This time she put out a shaky hand even though he hadn’t moved.

He pulled in a deep breath. She stepped back again.

Before she could leave the balcony altogether, he stopped breathing. “Are you all right?”

Those weren’t the words he wanted to hear, though he had expected something unpleasant. “Enough of what?”

She narrowed her eyes. “You kissing me.”

He risked a smile. “When I stopped, you moved back into my arms and began again without me having to ask.” 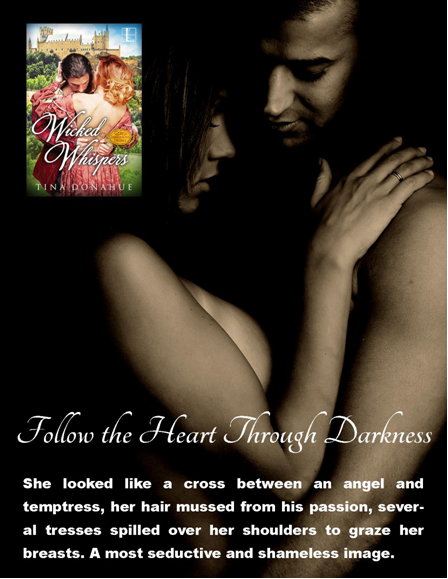