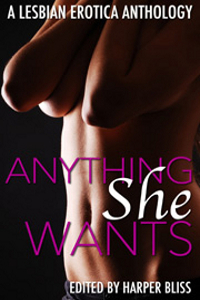 In the office, on the set of a movie or on the bathroom floor, the ladies in this anthology don’t care where they get it on. Power play, first time encounters and office rivalry get the characters in these twelve stories so riled up, the only way to go is down and dirty. Tales of spanking, a wild all-female college party and a waitress with a strap-on grace the pages of Ladylit’s first multi-author lesbian erotica anthology.

Caution: Reading ‘Anything She Wants’ will make you wet!

In relationships with large age differences, people often assume it is the older person who instigates it. Something to do with power, or confidence, I guess.

But when it came to Clarissa and me, those people couldn’t be more wrong. It was me who did all the running—I was determined to get my lady.

And a lady she was. As soon as I laid eyes on her at a posh charity do at the golf club I work at, I wanted her. Despite her advancing years, she looked truly stunning in a high-necked and high-backed midnight blue dress and matching shoes. She had a glass of obscenely expensive champagne in her hand—I should know, I’d poured it—and was surrounded by smiling, simpering people who appeared to hang on to her every word.

Only someone so used to watching people, so used to reading their body language, could have known that she didn’t really want to be there. That someone was me. I observed and noticed the too-tight grip on the crystal glass, the occasional clenching of her jaw and the slightly abandoned look in her eye as she forced another smile.

The man at her side—who I guessed was her husband—looked pleasant enough, as men go. But I knew just from watching them that their relationship existed on paper only. It was probably full of love and passion to start with, but not any more. The Lady—as I’d thought of her before I knew her name—gave him only cursory glances, and the most platonic of touches. He offered the same in return, and his gaze often followed the young waitresses who milled around in their short black skirts and tight white blouses. He wasn’t remotely subtle about it, either.

He didn’t check me out, though. I look too boyish, too male, to draw the attention of a straight man. That night, in my black trousers, flat black shoes and white shirt, I probably looked just like a man. With the exception of the slightest bumps in the chest area, so small as to be unnoticeable.

I was truly the Tramp to her Lady, but I honestly didn’t care. I wanted her. Wanted to ruffle her refined feathers, mess up her hair, turn her fake smiles into genuine ones, her forced laughs into giggles of pleasure.

I set out to do just that. I had no idea, of course, if she was interested in women, but I figured I would never know unless I tried.

So I headed to the serving hatch that led to the kitchen and picked up a tray loaded with new glasses of champagne. Ignoring the expectant glances aimed at me as I whizzed past groups of party goers, I headed directly towards the Lady and the people with her. Most of them took fresh glasses and replaced their empty ones with barely a glimpse in my direction. And certainly not a thank you—the posh types that frequented the golf club rarely noticed the hired help. But my lady did. She noticed me. Her gaze lingered rather too long on mine, before flicking quickly up and down my body and returning to meet my eyes.

I did a mental fist pump. I wasn’t sure if she realised that I was, in fact, female, but either way she’d checked me out. Result. Now I just had to figure out a way to seduce her.

I walked away before her group thought I was mad and circulated the room until my tray was full of empty glasses. It gave me the opportunity to think. By the time I put the tray on the serving hatch’s shelf, I had a plan.

I turned to face the room again, immediately pinpointing her. I fixed my gaze upon her mature, delicious figure and waited. She couldn’t fake interest in the conversation she was being forced to listen to indefinitely.