Coming Together: In The Trenches 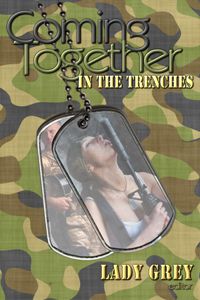 Contains my story, A Problem with Authority.

Once Upon a Thursday by Robert Buckley
During the American Civil War a squad of Union soldiers gets lost in the woods of northern Virginia. They find their way to a forlorn tobacco shed wherein dwell an enigmatic woman and a group of elderly men who have no sense of time.

Half a Day from the Front by Skilja Peregrinarius
Claire works in an inn close enough to the front lines to hear the guns in the night. She can’t fight, so she does what she can to support those who do.

This is Me Holding You by Annabeth Leong
As Carin’s life as a soldier again calls her away from her family, her husband Jun searches for a way to bind her to him. In the final hours of her leave, he gifts her with ropes he made himself, twisted from milkweed he gathered while thinking of her.

When He Comes Home by Di Topaz
Natalie catches Vance’s eye at the beginning of her college career. After a four-year game of cat and mouse, she finally admits her feelings for him. Their newfound romance is interrupted when Vance decides to join the Army.

Report on the Heart by Yvette Hines
After a career as an Air Force public affairs sergeant, Maria Locket has separated from the military and moved close to her hometown, where the biggest story she figures will be the local society events. Her plans for a smooth future are interrupted by the unexpected appearance of someone she thought was gone forever.

A Problem with Authority by Lucy Felthouse
Corporal Roxanne Grey has bawled Private Jesse Bagnall out one too many times during drill instruction. Jesse complains to his friends about the Corporal’s mistreatment, loudly enough that she overhears his rant. Commanding him into the guardroom, Roxanne divulges some information which makes it very easy for the two of them to get back on an even keel.

Comando Especial by Kimber Vale
Lieutenant Colonel Alexander Rojas commands Navy SEAL trained soldiers in a special anti-narcotics division of the Colombian military, facing deadly enemies on a regular basis. But when Alex’s ex-girlfriend is kidnapped by a ruthless drug lord, the usual high-octane mission becomes personal. If Alex and Luz get out of the dangerous situation alive, Alex doesn’t plan to let Luz walk away a second time.

Dutch & Lobo by Aliyah Burke
A Marine finds passion in the jungle, enlisting the help of his lover to save a fellow Marine. Will Dutch ever see her again or will his memories be all he’s allowed of the mercenary Lobo?

Private Jesse Bagnall glowered and muttered to himself all the way to the mess. He’d just been bawled out by Corporal Roxanne Grey—yet again—and he was getting seriously fed up of it. He knew he wasn’t perfect in the drill exercises, but then nor were any of the other guys. It was like she was singling him out and aiming all her abuse in his direction. Being shouted at was to be expected in the army—it was almost part of the job description—but Corporal Grey’s attitude was bordering on discriminatory, and he didn’t know what to do about it. Especially without looking like a total pussy.

Spotting some of his closest friends at a table towards the back of the mess, he caught the eye of one of them—Matt Kay—raised a hand in greeting, then got in line for his food.

Several minutes later he loaded his cup of tea onto his tray along with everything else and headed over to where he’d seen Matt and the boys. Hopefully they’d take his mind off the Queen Bitch. They were always game for a laugh.

“All right, lads?” he said, sliding his tray onto the table and taking a seat.

There were mumbles of assent.

Ed raised an eyebrow, and the other men turned their attention to Jesse, too. “Well,” Ed said, “that wasn’t very convincing. What’s up, mate?”

Jesse sighed, ran a hand through his hair. “It’s the drill instructor.”

Not wanting to look a wimp in front of his mates, Jesse changed his tone. But once he had, the anger took over him. “She’s a fucking bitch, that’s what!”

The confused expressions turned to surprised ones.

“I’m fed up her treating me like a twat. I know it’s her job to bawl us out, but she takes it too far. I do my fucking best, work my arse off, and it’s still not good enough for her.”

He barely noticed the gazes of his friends shifting slightly, carried on regardless. “She definitely picks on me more than everyone else. As though I’ve seen sitting on my arse when everyone else is killing themselves to get it right. She’s just being a complete and utter bitch. Bitch face fucking Grey!”

Matt cleared his throat, to no avail.

“You know what her problem is? She needs a fucking good shag, she does. That might cheer the miserable cow up. Mind you, Christ knows what man would be brave enough to go there. She’d probably bite your cock off as soon as suck it.”

As the red mist of his anger dissipated, Jesse finally clocked the reactions of the other men around his table. They weren’t at all what he’d expect. Ed and Matt looked mighty chagrined, staring at a point over his left shoulder. Private Graham Pilgrim had actually put his head down and begun to bang it on the table.

A cold trickle of dread ran down his back, and he turned, wondering which of his superiors had heard his rant.

Fuck. It was none other than the target of his diatribe. Corporal Roxanne Grey stood, her arms crossed, one high-heeled foot tapping on the floor. Her facial expression was as far from impressed as it was possible to be.