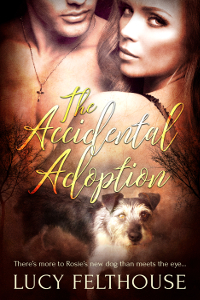 Rosie’s always wanted a dog, and now the time is right, so she heads for her local rescue center. She meets Scruffy there, and decides he’s the perfect dog for her. But things aren’t that straightforward—he’s only just been brought in and the shelter must try to find his owners before attempting to re-home him. A few weeks later, Rosie’s patience is rewarded and she’s allowed to adopt Scruffy. But it soon becomes apparent that things aren’t quite what they seem. How will Rosie react when she discovers there’s more to her new pet than meets the eye?

Note: This story has been previously published in a boxed set.

As soon as Rosie stepped into the kennel area, she feared she’d made a huge mistake. Barks, whines, yips, and the sounds of furry bodies climbing and bouncing up against the wire of the cages filled her ears. Her heart pounded and her mouth went dry. She froze just past the doorway, hovering on the very edge of indecision. Should she carry on, or turn and leave? Would she be able to cope with the emotional battering she’d undoubtedly get if she continued? All those sad faces, those soulful eyes, tragic stories… she’d want to take them all home, and neither she nor her compact house and garden were equipped for that.

She closed her eyes for a moment and took a deep breath. Come on, Rosie, get a bloody grip! You can’t save them all.

Nodding and gritting her teeth, her decision made, she walked tentatively towards the first kennel. The dog that greeted her was gorgeous—a mass of black fur, lolling tongue, heavy panting and frantically wagging tail. Aww! Already Rosie’s heart was melting, but she knew she had to be sensible about this. Lovely as… she read the information notice stapled to the kennel’s frame… Aidan was, he was far, far too big for her house and garden. The poor boy would go stir crazy.

She’d thought long and hard about getting a dog, had weighed up the pros and cons, figured out costs and budget, and come to the decision that it was perfectly doable, as long as she found the right one. For his or her sake, as well as her own. No point in rescuing a dog if she couldn’t keep up with its need for exercise, or couldn’t afford to feed its enormous appetite or make the pet insurance payments. That would be worse than leaving it where it was, to be potentially adopted by someone who could provide those things.

She gave Aidan a fond smile. “Sorry, beautiful boy. I think you’re amazing, but you’re too big. Someone’s going to come along soon who’s got acres of land, though, and they’re going to snap you up. You’ll have an amazing time!”

He wagged his tail faster and cocked his head, as though digesting her words. Then he padded over to a pile of blankets in the corner of the kennel, flopped down and rested his head on his paws.

Rosie moved on. The next enclosure held a pair of Border Terriers, who yipped excitedly and ran around in circles as she read their information packet. She sighed and looked at the delightfully scruffy duo. “Sorry, you nutters. You’re actually the right sort of size, but it says here you’d prefer to be re-homed together, since you’re from the same litter and have been together all your lives. There’s no way I want to separate you, so I’m afraid we’re not a match.”

The terriers, in their excitement, were now play-fighting, and therefore hardly noticed when Rosie stepped away. She chuckled. Not a match. This is like a bloody dating show. But the thought cemented the idea in her head that, if she was going to give a forever home to a dog, they needed to be a good match. It went both ways. She might find a dog that ticked all her boxes, but if they didn’t get along, or the dog didn’t like her, she couldn’t take it home. She had to be as picky about a dog as she was about men—possibly more so. If a man wasn’t right for her, she could break it off—no harm done, except perhaps a smidge of bruised pride or some disappointment. If a dog wasn’t right, she’d have to bring it back to the rescue center, and she really, really didn’t want to do that. That would be heartbreaking for all concerned.

The only trouble was, if she had to be pickier over a dog than a man, then chances were she’d go home empty-handed. She’d been single for over two years. There’d been the occasional date, but only ever first dates, no follow-ups—Rosie didn’t believe in stringing anyone along if she wasn’t attracted to them. And it hadn’t been through lack of trying, either. She wasn’t desperate, and she didn’t believe that being in a relationship was the only way to be happy, but she’d attempted dating websites, allowed her friends to set her up, and had also been open to possibilities when she’d been out and about doing menial tasks like grocery shopping, or out socializing. She’d now adopted the attitude of if it happens, it happens; if it doesn’t, it doesn’t.

Damn it. If she couldn’t find a bloke she liked in the reasonably populated area she lived in, how on earth was she going to find a dog in this rescue center which held only fifty dogs?

With patience. You look at them all objectively at first, and if there’s a cutie that’s right, you go from there. If there isn’t, you leave and try again in a couple of weeks.

She gave a firm nod. Objectively—that’s how she had to play this. She’d have to disengage her emotions altogether and glance over each animal as though it was a piece of fruit or a vegetable in the supermarket. Assess its shape and size, its suitability for her requirements. Then, and only then, could she let her emotions be involved. It was a weird and kind of heartless way of going about things, but it was also responsible. Better that than falling head over heels for a Great Dane or an Irish Wolfhound.

This tactic lasted for precisely eleven further enclosures. Too big, too big, need to be re-homed together, needs to be in a house with other dogs, reactive, needs extensive training… each one was quickly checked out, then passed by for whatever reason.
But when Rosie arrived at the twelfth kennel, everything changed.