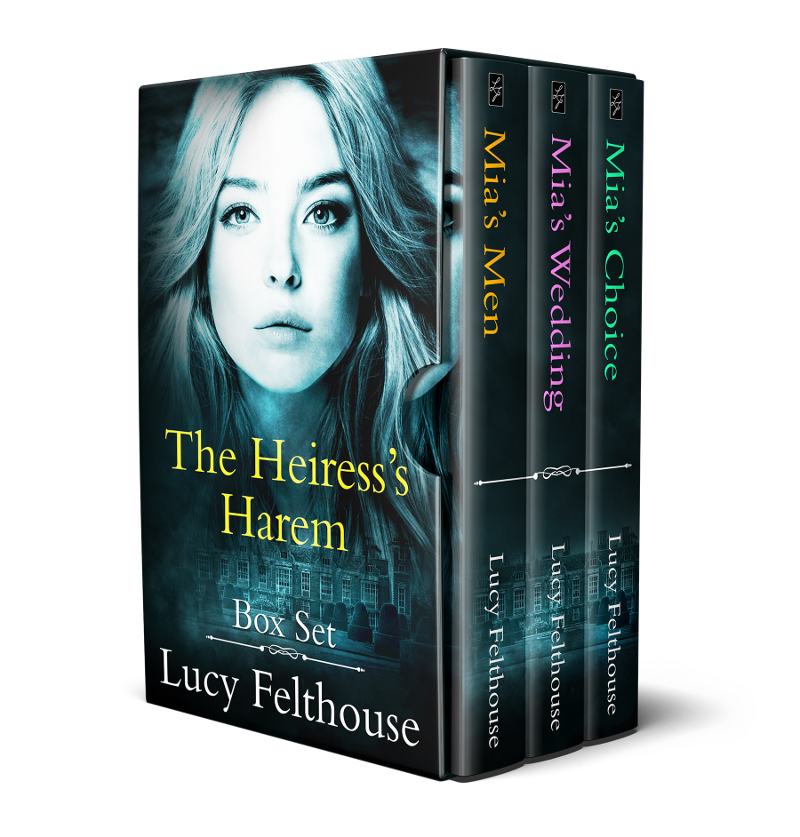 How does a young woman go from being a long-term singleton, to having four gorgeous guys? Find out in The Heiress’s Harem box set.

Contains the complete series, all three books for the price of two—Mia’s Men, Mia’s Wedding, and Mia’s Choice.

Mia’s world has fallen apart. Then, just when she thinks it can’t possibly get any worse, it does.

Mia Harrington’s father just lost his brave battle with cancer. Naturally, she’s devastated. With her mother long-since dead, and no siblings, Mia has a great deal of responsibility to shoulder. She’s also the sole beneficiary of her father’s estate. Or so she thinks.

Unbeknownst to Mia, her father made a change to his will. She can still inherit, but only if she marries a suitable man within twelve months. If she doesn’t, her vile cousin will get everything. Determined not to lose her beloved childhood home, she resolves to find someone that fits the bill. What she isn’t expecting, however, is for that someone to be into sharing women with his best friend. In the meantime, Mia’s friendship with the estate gardener has blossomed into so much more.

She can’t possibly plan to marry one man, while also being involved with two others …or can she?

Planning a wedding is stressful enough, and that’s without a harem of gorgeous men to deal with.

Mia Harrington has had a difficult time of it lately—her father’s illness and subsequent death, then finding out she must get married if she is to inherit what’s rightfully hers. Fortunately, she’s tough and resourceful, and has emerged relatively unscathed from this period, as well as finding herself a suitable husband.

However, things are far from simple. Mia might be planning to marry investment banker Elias Pym, but she’s also having a relationship with his best friend, Doctor Alex Cartwright, and is in love with her gardener, Thomas Walker. Add to that broken dates, flashy proposals, a sexy Asian tech billionaire, and a nosey housekeeper, and you’ve got a situation hectic enough to drive even the most capable person to distraction. Can Mia juggle her men, her job, and the wedding arrangements, or is her happily ever after over before it has even begun?

But what happens after the wedding?

The last few months of Mia Harrington’s life have been tumultuous, to say the least. Losing her father, the bombshell in his will, followed by her multiple whirlwind romances and subsequent marriage—it’s little wonder she’s so thrilled to be spending three weeks in a tropical paradise with her four men. Rest, relaxation and a hefty dose of fun is precisely what they all need.

But the unconventional honeymoon isn’t all sea, sun, sand, and scorching sex. Back home in England, they have careers, responsibilities, other things that take up their time. Being in each other’s pockets on a tiny island is a challenge—but is it one they can rise to? Will this make or break their relationships? And when being away from it all gives them time to think, what impact will that have on the decisions they make about their futures?

Mia Harrington thanked James, her father’s butler—her butler now, she supposed—as she stood from behind her father’s desk in the estate office—now also hers, to welcome her visitor.

“Mr Lenton. Thank you so much for coming, and on such short notice. Please, come in, and take a seat. Would you like something to drink? Tea, coffee, water?”

The grey-haired, bespectacled man gave a tight smile and bustled over to the chair Mia had indicated. “Thank you, Miss Harrington. A glass of water would be fine.” He took a seat, then began removing files and papers from his briefcase and placing them on the desk.

Once Mia had delivered two glasses of water to the desk and taken her own seat, the solicitor fixed her with what was undoubtedly an often-practised solemn expression. “Thank you. May I firstly offer my sincere condolences on the loss of your father? He was a wonderful man, and he will be greatly missed.”

Mia barely resisted the temptation to roll her eyes. She’d received so many condolences and expressions of sympathy in the last thirty hours that she was in danger of drowning in them. In many ways, of course, she deeply appreciated them—it was heart-warming and offered the merest sliver of comfort to know that she wasn’t the only one who’d loved Edward Harrington and genuinely mourned his loss.

It was the sound-bite condolences that drove her crazy, from people that had barely known him, and those she’d never even heard of, let alone met. How could it possibly help Mia to know that Mrs Pipes from the post office in the village was terribly sorry for her loss? And it would only get worse once the death announcement went into the newspaper.

She mentally shook herself. While Mrs Pipes might not matter, Mr Lenton most definitely did. He had been her father’s solicitor for many years now, and was here to discuss her father’s will with her. And, although she’d much rather not be dealing with the fallout, would much rather Edward Harrington was the one in the office with her right now, poring over paperwork; in the absence of a time machine or a magic wand, she had no choice. She had to hear what her father’s wishes were, and carry them out to the very best of her ability.

Her remaining family members—distant as they were—thought it odd that Mia didn’t already know her father’s wishes. It wasn’t as if his death had been a surprise, after all. The man had been valiantly fighting cancer for two years, and finally it had won, leaving Mia devastated. Just because she’d known it was inevitable didn’t make bearing his loss any easier. In fact, the only thing that made it remotely tolerable was knowing he was no longer suffering from what, especially towards the end, had been horrific side-effects and discomfort.

It was that overwhelming love and admiration, as well as simply not wanting to contemplate the “after”, that resulted in Mia’s refusing to talk to her father about what he wanted to happen once he was gone. Years ago, when he’d re-done his will following his wife—Mia’s mother’s—death, he’d basically told her she was the main beneficiary, as well as the executor, and that his funeral wishes were all there in black and white. With that knowledge in the back of her mind, Mia saw no need to further distress her father, or herself, by discussing something she wished with a fervent—albeit pointless—hope that she would never have to deal with. But here it was.

“Thank you, Mr Lenton. I appreciate that,” she lied.

The solicitor gave a tight nod, then indicated a bound document in front of him. “I have here your father’s last will and testament. I’m here to go through it with you, answer any questions you might have, and give advice on your next steps. Is that all right?”

Mia nodded, then slid a notepad in front of her and retrieved a pen from the holder so she could make notes if she needed to. No doubt there would be a great deal of legalese in the document, so if anything didn’t make sense, she needed to be able to remember it, so she could get the man to explain it.

“All right.” Mr Lenton cast his eyes down at the document. “This is the last will and testament of Mr Edward Harrington, born first of April, 1947. Last amended fifteenth of September, 2017.”

Mia flicked her gaze to the man’s face, frowning. “Excuse me? Amended? My father didn’t mention any changes.” She paused. “So… he had the amendment made while he was severely ill?”

With a nod, the man replied, “Yes. I visited him here myself.” He shuffled in the chair and seemed to be having some difficulty maintaining eye contact with her. “I’m sorry, your father told me he would discuss this with you before… the time came.”

“Well, he didn’t,” she snapped, then held her hands up. “I apologise, Mr Lenton, I didn’t mean to take it out on you. I’m just surprised, that’s all. So what is to discuss? What amendments did my father make? I’m not being thrown out of here, am I?” she joked, though as the words passed her lips, a splinter of panic worked its way into her mind. There was no way in hell he’d disinherited her. There was simply no reason to—she’d been the loving, dutiful daughter until his dying breath, and now beyond. So what had changed?