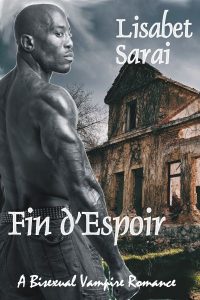 Bitter and alone, Etienne de Rémorcy haunts the forest around the ruined plantation of Fin d’Espoir. He has sworn to never again taste human blood. Then a fierce storm and a runaway horse bring a slender, raven-haired beauty to his lair. When she begs him to take her, he cannot resist.

Madeleine and Troy hope that a carefree vacation in tropical Jamaica will reignite their faded passion. On a mountain trail ride, Maddy’s horse bolts, carrying her deep into the jungle. Injured and lost, she is saved by a giant of a man whose mere presence kindles unbearable desire. By the time she understands his dark nature, it is far too late for her to escape.

When Maddy returns, Troy finds her greatly changed : ravenous in bed, restless and disturbed otherwise. The elegant stranger he meets on the beach holds the key to her transformation – and soon has seduced Troy as well.

Tortured by his conscience, Etienne is determined to set the young couple free. But their love may be his last hope for redemption.

Note: This book was previously published by Totally Bound under the title Fire in the Blood. It has been edited and updated for this release.

Etienne dragged his belt from the loops of his dungarees. “Give me your hands,” he ordered. Madeleine held them out, palms turned upward in supplication. “I plan to bind you to ensure that you cannot escape me once we have begun. I will give you one more chance. Do you still want this?”

Maddy shivered, imagining herself restrained on the rough bed, powerless and at his mercy. Lust and fear warred in her body. Liquid dripped from her pussy, soaking the satiny robe bunched under her buttocks. She and Troy had played at bondage, silk scarves and velvet blindfolds. This was real.

She sought Etienne’s eyes, seeking reassurance. Fire flickered in the depths of those dark pools. His face was a beautiful mask that offered no solace. He gripped the belt in both hands, twisting as if testing it. “Et bien, Madeleine?”

She wanted it. She could not pretend otherwise. She wanted him, on any terms, wanted whatever he would do to her. Nothing mattered, not his terrifying strength, not his grim warnings, not the feeble image of Troy awaiting her back at the hotel. She reached for the bonds he offered. “Take me,” she whispered.

In an instant, he had slipped the end of the belt through the buckle and caught her wrists in the resulting loop. She felt the leather begin to bite into her skin as he pulled her arms above her head and a further tightness as he secured the other end to the metal bedstead. She tugged at the restraints, verifying the stark fact she could not, in fact, work herself free. Terror and arousal swept through her in alternating waves.

Her heart slammed against ribs. Her nipples and her clit throbbed with her pulse. Without being told, she spread her damp thighs. An oceany scent rose from her exposed pussy.

He shrugged off his vest and pushed his trousers down over his hips. Naked, he was even more formidable, his ebony thighs corded with muscle, his sculpted chest and flat belly gleaming like black marble. His erect cock sprang from the wiry thicket of his groin, on the same gigantic scale as the rest of his massive body.

The shaft looked thick as her wrist. Veins meandered along its endless dark length like creepers on a tree branch. The cap was dusky pink, taut, polished flesh that glistened with moisture.

Maddy moaned at the mere thought of that cock invading her. Saliva gathered in her mouth.

“Little harlot! Have you no shame?” Even as he chided her, however, the black giant climbed back onto the bed, positioning himself between her thighs.

She expected ferocity, his power unleashed. She imagined him forcing that awe-inspiring cock deep into her body. Instead, he bent his head and flicked his tongue along the sensitive skin on the inside of her knee.

“Ah…” Pleasure rippled through her, converging on her pussy. He licked again, moving upward, painting her with his cool saliva. She squirmed under his mouth, wanting to feel those thick lips on her aching clit. Gradually, he came closer to her center, yet still he lingered on her thighs, kissing, nibbling, lapping up the juices that spilled from her hungry, empty sex. She arched up, pushing her pelvis towards him. Without effort, without removing his mouth, he forced her back onto the bed.