Shower You With Love by E. D. Parr (@parr_books) 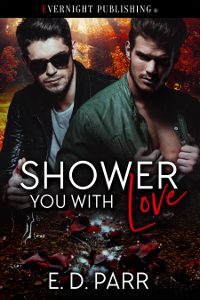 Chris Everhart attends his best friend’s weeklong wedding festivities. He meets handsome, enigmatic, Owen, and in a haze of attraction ignores the strangeness surrounding Owen. Convinced he’s falling in love, Chris spends every moment he can with Owen, until on the final day of his best friend’s celebrations he discovers a heartbreaking and shocking truth. He and Owen can never be together.

Traumatized, lonely, Chris can’t settle into another relationship, and then, after two years of wishing he could feel the way he felt for Owen with another man, fate intervenes. He meets gorgeous, gentle Matthew.

Spooked, Chris is about to run from Matthew who reminds him so much of Owen, but Matthew asks Chris to dance with him.

In Matthew’s arms, Chris can’t ignore the feeling of belonging that rushes over him.

Will he take the risk to love again, or continue to yearn for a ghost?

The early evening sun glowed in the sky. Birds still sang. The breeze caressed his face, gentle and warm. Only white wisps of cloud trailed across the sky. It was an evening meant to walk hand in hand with a lover.

Chris sighed and drank some of his whisky. Since his boyfriend left him nearly a year ago, he hadn’t met anyone who stirred his heart. If there were any gay guys at the gathering, he’d yet to identify them. Since he was the only gay man among his friendship group, Chris expected to be the only person who hadn’t hooked up with someone by the time the bride and groom met at the altar. He smiled to himself recalling a work colleague’s words about wedding festivities. “That’s what usually happens isn’t it … you sleep with someone out of sheer envy for the “glowing with love” bride and groom?” Chris had laughed when the guy put air commas around the words “glowing with love.” “Some might. I might not,” but in his heart he dearly wished for a gentle, handsome man to love. Chris was lonelier than he admitted to himself or anyone else.

Four days of games, parties, and outings stretched ahead of him. Chris forced a more positive mood. This is a beautiful estate. I should explore. Phil’s parents owned the huge old house on a wealth of gardens. Ben, Phil’s dad, ran his events planning business from there and often one or two of the large rooms were used for conferences. Presently, the estate was closed for two weeks as the families and friends assembled to celebrate Phil’s wedding.

He peeled the label that named him from his jacket lapel, and stuffed it into his pocket. Then left his half-empty glass on a bench beside a row of rose bushes, heavy with large pink blooms, and wandered off down the path that wound around the house. The hem of his jacket trailed along two of the flowers and the perfume shed by the roses followed him.

The path forked at a corner of the house, and Chris took the one that led into an archway of trees. The path beneath his feet changed. Some of the paving stones held large cracks where tiny white daisies grew among dark moss. Chris bent and picked one—so small, yet so perfect. He put it into the buttonhole on his collar. The tree branches met at their canopy and only a few slanting rays of sun penetrated. Some scented climbing flowers wove through the trees, twining around their trunks. Chris smiled, enjoying the fragrant enclosure. Peace dropped over him as he walked.

At the end of the path, he turned at a fork that led toward the house again. Chris considered striking out across the lawn for a look at what appeared to be a small round pond, but the evening sun had disappeared behind a bank of clouds. He glanced upward at the sky. A few large orbs of rain splattered on his face. Funny, only minutes ago it didn’t look like rain at all.

He walked more rapidly in the direction of the house as the sky became overcast. On this side of the building, he could see a long line of windows, two of which from that angle, seemed to be French doors, and they were flung open. As Chris neared them, strains of music floated in the descending twilight. Fairy lights glittered, strung across the tops of the doors, and as the rain fell, the drops reflected their silvery twinkle.

By the time Chris reached the entrance, dark stars of raindrops patterned his dove-gray suit jacket and dampened his face. Chris dashed into the room accessible from the large glass doors and froze. He’d expected this to be another way into the living room he’d left earlier, especially with the lure of music guiding him, but a totally different and smaller room lay before him, and in the middle of the parquet, a man danced a kind of waltz, alone, clutching a rectangular cushion to his chest. 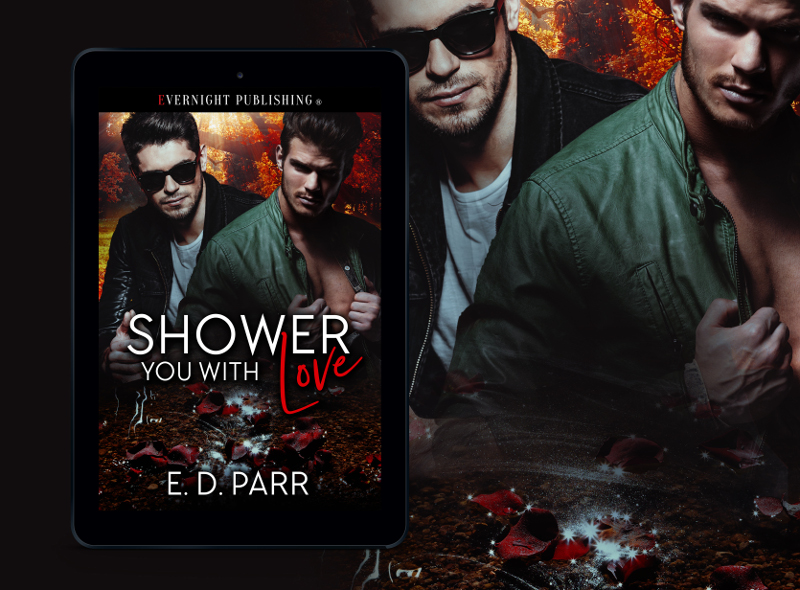 One Response to "Shower You With Love by E. D. Parr (@parr_books)"