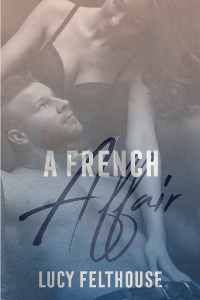 How will she react when she learns the truth about him?

Sydney Tyler jumped so hard her fingers slammed onto the laptop’s keyboard, resulting in a line of gobbledegook.

Gasping, she clutched at her chest as her heart thumped painfully. “What the fucking hell was that?” she asked the empty room.

She pushed her chair back from the desk and stepped over to the window. Peering out into the brilliant sunshine, she saw something unexpected on the lawn. Workmen.

She groaned. So much for her peaceful writer’s retreat. She’d planned to get a good chunk of her novel down in the fortnight she was away, and now it looked as though her peace was going to be monumentally shattered by banging, drilling and God knows what else.

Sighing, she gave the windowsill a pathetic thump in her frustration. She might have been pissed off, but she was no vandal. And besides, she didn’t want those noisy buggers in her part of the building, fixing things—having them next door was bad enough.

Sydney really could not believe her shitty luck. When she’d booked the cottage in the French village of Monthiers over the phone a couple of months ago, she’d dealt with a fellow Brit called Harry Bay, the owner. On arrival, though, a timid French woman had let her into the luxurious barn conversion before handing over the keys and explaining a little bit about the local area. Apparently, in the mornings, someone came along the village streets, selling fresh bread and pastries.

There wasn’t much else to tell, it seemed, as the village had nothing except a church—almost opposite her accommodation—and a tavern. It was also lacking—she’d quickly discovered—a mobile signal. Not even a single bar illuminated her screen. Her phone was now no more than a watch, alarm clock and calendar. If there was an emergency, she was screwed. But on a much lighter note, it was one less distraction. She could just get on with what she was here to do, blissfully undisturbed.

The arrival of the workmen was incredibly irritating. Her temporary landlord hadn’t mentioned there’d be anyone working next door. If he had, she wouldn’t have booked the place—the quiet and idyllic location were the whole reason for choosing this property, this area. Even though there was no way he could have known she was there to work, common courtesy would dictate that he told her. Perhaps he was just interested in taking her money and didn’t give a damn about whether she had a satisfactory stay or not. There was nothing to be done about it now, unfortunately. She’d paid for the fortnight, and she was buggered if she was going to cut and run, pissing that money down the drain. She’d just have to find a way around the disturbance, and console herself that she could leave a snarky write up on a review site when she got home.

Finding out the builders’ working hours would be a good start—she could attempt to write around them then. Or perhaps she could make use of the headphones she’d stuffed into her case, without ever thinking they’d get used. Some loud rock music would drown out the din from next door and hopefully allow her to work. It was worth a try. She hoped they were only doing a small job that would only take a couple of days, but deep down she knew they weren’t. They were likely renovating the whole place so it was as beautiful as the half she was in.

She was just about to go in search of the aforementioned headphones when one of the men pottering around on the lush back garden stepped away from the others. Standing in a shaft of sunlight, he pulled his arms high above his head and stretched, dragging up his T-shirt to reveal a lean stomach with a fine line of dark hair leading enticingly into the waistband of his jeans.

Oh yum. Perhaps having builders next door wouldn’t be so bad after all. Especially if they all looked like him. She continued to watch as the man dropped his arms to his sides. His dark hair was overlong and stuck out at crazy angles, as though he’d been running his fingers through it. She couldn’t see the colour of his eyes from this distance, but she could make out enough detail of his features to surmise he was handsome. Gorgeous, actually. Close up he could be much less attractive, of course, but from her upstairs window, the view was pretty fine.

Just then, he glanced across at her side of the long barn. When he caught sight of her, his face dropped. He looked back at the other builders, then returned his gaze to her. Pointing at the group of men, he slapped his forehead with his other hand. Finally, he pointed at his chest, then up at her. He was indicating he wanted to come in—maybe to explain what was going on. She hoped his English was better than her French.

She paused, then nodded. Common sense told her she shouldn’t be letting a strange man into her temporary home, but then, there were several large, bulky men milling around, so if they were a dodgy sort, she and the locked door would have no chance against them, especially with no means of calling for assistance. She could scream, of course, but she doubted anyone would come. The walls of the building were extremely thick—though sadly, no match for banging and drilling—the nearest house was a little way down the road, and by day, the village was all but deserted. There was only one business that she knew of—the tavern—so the other inhabitants would have to go elsewhere to work. To nearby Chateau-Thierry, perhaps, or even further afield.

She’d just have to hope the handsome man—probably the head honcho of their group—was also a decent one. Presumably they were a reputable company, as they’d been hired by the British owners, who were usually more wary of cowboy builders and, given the horror stories and dedicated TV programmes back home, it was understandable.

Before she got even halfway down the stairs, a knock came at the door. She moved a little faster, careful not to trip in her flip flops and go hurtling down the steps. Once she was safely on the ground floor, she twisted the key in the door and opened it.

“Hi,” she said, glad she’d spoken before she’d looked at him properly. He would definitely have distracted her enough that even the tiny two-letter word would have had trouble making its way out of her mouth. She’d been totally wrong about him not being as attractive close up. He was a million times hotter, and all she could manage to do was step back and wave him into the house.

“Hello,” he replied, waiting until she’d closed the door and turned around to hold out his hand. “I’m Harry Bay, the owner. And I feel absolutely horrendous about all this.”

“…a sweet romance between two people wanting a new start after being hurt, but with lots of lovemaking, not just sex. A good book for a rainy afternoon or for lying on the beach, (not to mention, if you might be on your way to Paris in the springtime!).” 4.5 out of 5, Manic Readers

“I really enjoyed A French Affair and read it in one sitting. Ms Felthouse has a way of writing that is so perfectly real. If you like contemporary romance that is more than just sex – but has plenty of it – and has a story, and especially if you love France, then this might just be a book for you.” 4 out of 5, Long and Short Reviews

“I thoroughly enjoyed this book. The characters and the plot were both believable and likable …I was rooting for a HEA almost from the start… a great read for a lazy afternoon/evening in the garden with a glass of chilled wine.” 5 out of 5, The Twilight Zone