A Taste of Paris 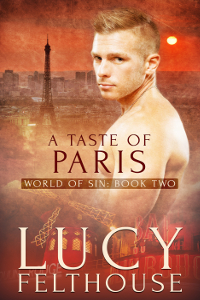 Book two of the World of Sin series. (Find the other books here: A Taste of London | A Taste of Rome)

Ryan Stonebridge and his friend Kristian Hurst are traveling on their year off before going to university.

Unfortunately, Kristian has been called back home due to a family emergency. Ryan continues on to Paris alone, hoping his friend will join him again soon.

In the meantime, Ryan’s lucky streak with women continues, and by the time Kristian makes it to Paris, Ryan’s bumper box of condoms is depleting rapidly. However, there are more than enough women to go around, and Kristian intends to have some sexy fun of his own, and when the boys get a chance to play with two sexy ladies at once, they certainly aren’t going to turn it down.

Ryan could hardly believe his luck. After a sex-packed day and a bit in London, he was now being propositioned by a sexy older woman on the Eurostar. The Paris-bound train had just started moving and it seemed the woman wanted to spend at least some of the two-and-a quarter-hour journey to the French capital fucking him in the toilet.

He shook his head disbelievingly. Then, after making sure no one had witnessed their exchange—when she’d given him the come-on—he slipped from his seat and made his way as nonchalantly as possible in the direction the woman had gone. He quickly found her, standing in the area between carriages that also housed the public conveniences.

She looked around, ensuring no one could see through the glass doors at the ends of the carriages to either side of them, pulled open the toilet door and dragged him inside.

Ryan barely had time to catch a breath before she’d locked the door, slammed him against it and molded her lips to his. She tasted of expensive champagne—she’d probably been indulging in St. Pancras station’s champagne bar—and it suddenly made him very aware that, although she’d started their sexy rendezvous, he was most likely taking advantage of an inebriated woman. He twisted his head away.

“Hey,” he said, grasping her arms and pushing her gently away from him. “Don’t get me wrong, you’re gorgeous and very, very sexy, but you’ve been drinking. I don’t want you to do something you might regret later.”

The woman laughed, long and loud, and Ryan worried that someone might have heard her and wonder why on earth there was a woman laughing to herself in the train toilets. The last thing he wanted was to open the door and find a pissed-off member of staff waiting there. There was no excuse for two adults being in a locked cubicle together that anyone would believe.

Clapping her hand over her mouth, the woman suppressed her mirth, then finally spoke. “Yes, gorgeous blond one.” Her French accent surprised him—he’d thought she was a tourist heading to Paris. “I have been drinking champagne. But only a glass. I’m certainly not drunk.”

With that, she pounced on him once more, and Ryan decided not to resist any longer. They were both consenting adults and he had protection in his pocket—so where was the harm in indulging their baser instincts? His cock definitely didn’t see any further reason for delay as it filled with blood and pressed against the crotch of his jeans.

He pushed his fingers into her thick black hair and pulled her more tightly to him, deepening their kiss. She was eager and, judging by the way she was rocking her hips against him, incredibly horny. He held out for as long as he could, exploring her mouth with his tongue, nibbling at her plump lower lip and pulling her hair to expose her white throat. Before long, though, the pants and tiny mewls coming from the woman’s mouth pushed him to the point of no return. His cock was all but bursting from his jeans and he really needed to be inside this woman’s pussy.

“Talk about a hot quickie. This is all about the here and now as told strictly through Ryan. A supersonic journey into erotica with a Parisian flair.” 4 out of 5, BTS eMag