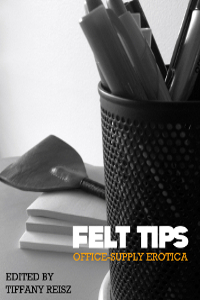 Please congratulate all our fine FELT TIPS writers when you see them on Twitter. They donated their time and talents to this charity anthology. Because of them, some kids who couldn’t afford new school supplies and some down-on-their-luck parents who can’t afford work clothes will be getting a hand from our one-handed read.

Eleanor had always been a sucker for stationery, since before she even knew how to spell the word. So when she got a part-time job at her local stationery store, it was a dream come true. As well as being able to stack shelves full of sticky notes and sparkly stickers, she got staff discount, too!

The discount came in very handy, as Eleanor was a mature (she was only 30, but they classed it as mature, much to her chagrin) art student and every penny was vital.

A couple of months into her employment, Eleanor was excited to finally discover what lay behind the mysterious door next to the staff room – another store room! The main one on the ground floor was where their deliveries were dropped off and stored, and for the most part it was big enough to hold everything. But as she flung open the door to the upstairs warehouse, Eleanor could understand why it was used as infrequently as possible. After all, who wants to lug boxes of stock up two flights of stairs?

The place was virtually abandoned. And yet, when Eleanor stepped inside, she felt like a child in a sweet shop. There were boxes dotted around the room, which had clearly been brought up here and forgotten about. Well, not any more.

She’d been given orders to find out what was in the upstairs warehouse, get it price stickered and put out on the shop floor. Her boss’ comment had been “Well, it’s not putting any money in the till from up there, is it?”

She rubbed her hands together and grinned. There was nothing she liked more than a project. And stationery, of course. So now she’d been presented with a task that encompassed both, she was one happy woman.

She set to work, opening boxes and discovering what goodies lay within. There were lots of odds and ends – single envelopes, lonely tubes of glitter, torn packets of crepe paper; but they could go onto the clearance shelf. Someone would buy them. In fact, if Eleanor allowed herself to admit it, she’d probably buy some of it for herself. She smiled ruefully. At least she was a sucker for collecting stuff she could actually use – imagine if she’d been a fan of porcelain dolls or garden gnomes! What would be the point?

Eleanor worked away, moving boxes closer to the door so she’d know which ones she’d already checked, and what was still to be uncovered.

As she opened yet another box, she was hit by the unmistakeable scent of strawberries. Frowning, she tugged back the flaps and quickly spotted the culprit. A scented gel pen had burst, its fragrance released for all the world to smell.