Letters to a War Zone 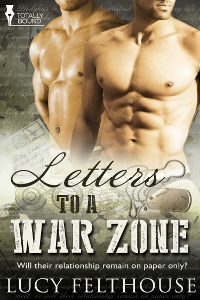 Bailey Hodgkiss is lonely and dissatisfied with his boring life as an insurance broker. In an attempt to insert some variety, he signs up to a website to write to serving soldiers. He’s put in touch with Corporal Nick Rock, and over the course of a couple of letters, the two of them strike up a friendship. They begin to divulge their secrets, including their preference for men.

After clicking all the available links on the website to find out more about it, Bailey decided to go ahead and sign up. He’d never know what it was really like unless he gave it a go.

He’d read about the site in an article somewhere, about how it linked people with serving soldiers, pilots, marines and sailors in order to write to them. It had been proven that receiving mail—even from someone they didn’t know—improved military morale. It sounded like a damn good use of time to Bailey, and it would be interesting, too.

He began typing his details into the online form. Of course, the chances were that he’d be paired up with a man, given the ratio of males to females in the forces. It didn’t matter, though. He could still exchange letters with a guy, become friends. It seemed like such an old-school way to communicate with someone, given how technology had come on over the years, but at least it was different. Perhaps it would give him something in his life to look forward to, something other than getting up, showering, going to work, coming home, eating, watching television and going to bed. The watching television—and even the eating—were occasionally replaced by nights out with friends or seeing family. Weekends were spent cleaning, washing clothes, gardening and odd jobs. Dull stuff, in other words.

He had an utterly mundane life, and Bailey knew it. It wasn’t even as if his job was exciting. Insurance broking was hardly thrilling, game-changing, or going to save the world. He didn’t expect having a pen pal to change his entire life, but it would certainly break the monotony. Hopefully.

He went through the various steps to fill in his details and create a profile, then continued right through to the information on actually writing and sending the letters. It looked straightforward enough.

His mind made up, Bailey immediately went in search of a pen, some nice paper and an envelope. Armed with a print out of exactly what to do when the letter was finished, he settled down at the kitchen table. Instantly, his mind went blank. What the fuck was he meant to say? He didn’t know any soldiers or other military personnel, didn’t know anything about their lives, other than there was a great deal more to it than shooting people and being shot at. His own existence was so fucking boring that he didn’t want to write about it. Unless there were any insomniacs in Afghanistan—telling them about his day would solve that particular condition right away.

After chewing on his biro until it broke, covering his lips and chin with ink, Bailey replaced it, resolving to try harder. He’d tell his pen pal the bare essentials about himself, then ask lots of questions about them and their work. That was bound to rustle up some conversation.

That decided, he began to write, absentmindedly swiping at his inky skin with a tissue. He’d have to scrub it off when he was done with the note. His wrist and hand had begun to ache before he was halfway down the page. He rolled his eyes. He sat on his arse at a desk all day, using a computer. As a result, even writing something short by hand was hard work! There was no way he was going to divulge that particular piece of information to someone that was willing to lay down their life to protect their country.

He just about managed to fill a single side of the A5-sized paper. And that was only because he’d formed large letters and spaced his words and lines out plenty. But he tried not to worry—at least he’d finished it, his first letter to a war zone.

He read through it carefully, relieved to find no mistakes. He’d forgotten how much more difficult—and messy—errors were on the written page. Computers let you edit and rewrite to your heart’s content. No correction fluid or crossings-out necessary.

Finally, he addressed the envelope. It felt like the longest address ever. The area and country was bad enough, even without including the soldier’s name and BFPO address. But it was done—Bailey Hodgkiss had penned a missive to Corporal Nick Rock, currently stationed at Camp Bastion, Helmand Province, Afghanistan.

Now he’d just have to post it and wait for a reply. The website had said his missive would take between one and three weeks to reach Corporal Rock. Then he had to allow for time for him to read it and send a reply. It could be around six weeks before he heard anything. If he heard anything at all.

“Lucy Felthouse did a fantastic job of creating a story line that was so heartfelt. I loved her characters, Bailey and Nick… Felthouse did a wonderful job of allowing their feelings for life and even love, to develop quickly. Sometimes you just click with someone. I loved this story and wish that I knew how Rome went.” 5 out of 5, Inked Rainbow Reads

“…sizzling hot. One man into soldiers and another man making love to him with his full uniform on are very hot indeed, great fantasy material for those of you into uniforms. All in all, I can recommend this book as a short hot little read.” 4 out of 5, Mrs Condit Reads Books

“While there is a love scene at the end, the focus of this story is on the development of their relationship. By the end, you are invested in the characters enough to want them to have a happy ending. I’m hoping to see more of these characters, perhaps in another instalment and hopefully from Nick’s POV. An enjoyable short story that left me wanting more.” 4 out of 5, Love Bites and Silk Ties