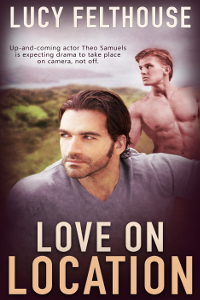 When Theo Samuels heads off to film on location in the village of Stoneydale, he’s expecting drama to take place on camera, not off. But when he meets gorgeous local lad, Eddie Henderson, he struggles to ignore his attraction. A relationship between the two of them would be utterly impractical, yet they’re drawn together nonetheless. Can they overcome the seemingly endless hurdles between them? Or is their fling destined to remain as just that?

Note: Love on Location has been previously released as part of the Brit Boys: On Boys boxed set.

Theodore Albert Samuels strode through Stoneydale Hall, barely giving the opulent furnishings, the priceless art or the stunning architecture a second glance. It belonged to him, after all. It was all his, his birthright, his inheritance.

He stopped suddenly. “Damn,” he muttered under his breath, hoping none of the film crew were taking any notice of him. Looking over, it appeared they were still absorbed in figuring out lighting, props and where the actors should stand to get the best shots. Good—he wasn’t due to have a camera pointed at him for another two days; plenty of time to get his head around his role. And it was imperative he did—it was his biggest and highest profile part to date. If he got this right, it could truly launch his career. Maybe even into Oscar-winning territory.

Taking several deep breaths, he pulled himself up to his full height of 6ft 4” and adopted a haughty, disinterested manner—channelling Mr Darcy, perhaps? Either the one from Pride and Prejudice orBridget Jones’ Diary would do.

I am William Arthur Stoneydale. And this property is mine.

They’d pretty much been given the run of the house—the real owners having gone to the south of France for the summer—so Theo continued marching around, upstairs and down, pulling in everything he could from his surroundings to make him truly feel like lord of the manor.

Sighing, he ran a hand through his mop of black curls and headed out into the gardens. They were beautiful; all manicured lawns, parterres, rose gardens, arches and perfectly placed shrubs. Despite the perfection, Theo felt more comfortable here—probably because he’d always been an outdoorsy sort, ever since he was a child. Only the strict yet loving influences of his parents had coaxed him inside to do his homework, study for his exams and eventually land himself a place at The Royal Academy of Dramatic Art, better known as RADA.

The latter had been completely his choice—his mother and father had only wanted him to work hard and do his best. His career options had not been chosen by them, only supported.

Slumping onto a bench, Theo reminded himself of his parents’ wholehearted support and belief. That, and the fact he’d graduated from RADA with a first. Following that, he’d gone from strength to strength.

“Come on, Theo,” he muttered to himself. “You can do this. It’s just another role. A role you can play. Can be.”

His solo pep talk was interrupted by the sound of footsteps crunching on gravel. Then, from behind a line of expertly done topiary appeared a young man, perhaps a few years Theo’s junior.

“Oh,” the other man said, slowing as he spotted Theo, “sorry. Didn’t know anyone would be out here. You’re not filming, are you?” He looked around for cameras. “I was told it wouldn’t be for a few days, give me time to finish—”

Theo cut him off. “Relax, mate, there’s no filming today. Not anywhere. The crew are still setting things up.”

The other man heaved a sigh of relief. “Oh, that’s all right then. Gave me a fright, that did. I need to make sure everything’s spot on in the gardens before they get rolling. So, what’s the star of the show doing out here by himself, anyway?”

The man made a scoffing sound. Then, “That’s not what I’ve heard. I’m Eddie, by the way. Eddie Henderson.”

Theo took the hand that was offered, and shook it. “Theodore Samuels. Theo. Nice to meet you.”

“You too. So, you never answered my question. Everything all right?”

“Yeah, I suppose,” Theo said with a shrug. “Just nerves, I think. I’m struggling to get into the right mindset for this character. But I’ve got a couple of days—so I won’t panic just yet. Actually,” he paused as a bright idea illuminated his brain, “could I ask you something?”

Eddie took a seat beside Theo on the bench, and it was only when they were up close and personal that he realised just how handsome the younger man was. He had a lightly-muscled build, ginger hair, a riot of freckles on his face and forearms, blue-green eyes and a slight gap between his two front teeth. Cute and sexy all at once. Christ, he’s going to be trouble.

“So all in all, this was a great book, with some light angst, scorching sex scenes, and fantastic characters! A must read!” 5 out of 5, Bayou Book Junkies

“This is a sweet love story, a lot of fun, and wildly entertaining!!!” Diverse Reader

“…a short but sweet romance between two closeted men who start out friends and grow into a relationship.” Gay Book Reviews

“It’s like taking a stroll, getting caught in the rain, running across an open field regardless, and then flopping to the ground in happy bliss. Yes, that about captures all the feels! A sweet tale all around. Kisses in the rain, rendezvous sex and a bounding pup!” 3 Chicks After Dark

“This M/M is about two men who are coming into their own and love comes along unexpectedly. If you like quick reads then I would say pick up this one. The attraction they build is sweet and steamy; but for those who are new to M/M romance it isn’t so intense. I hope we get to read more about Eddie and Theo as their love blossoms and grows. Plus Eddie was fun to read with his humor and free spirit.” The Jeep Diva

“Lucy Felthouse did a wonderful job. This story was very well written and both the author and the narrator kept me entertained. Just a FYI, the characters don’t get hot and heavy until about an hour into the book, but let me tell you it is worth the wait.” 4 out of 5, Gay Book Reviews

“Love on Location by Lucy Felthouse was a short, quick listen impeccably narrated by Joel Leslie. Not only did I enjoy the story, but liked it even more, being able to listen to Joel Leslie’s voice whilst enjoying the story. Thank you to both Lucy Felthouse and Joel Leslie for a job well done!” 4 out of 5, Love Bytes Reviews

“This story is low level angst, with two sweet MCs and an outstanding narrator. Thinking of picking up the audiobook? Don’t hesitate.” Scattered Thoughts and Rogue Words

“I really liked this cute short story and was rooting for these characters from the get-go.” The Novel Approach Reviews