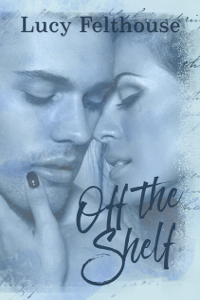 She finds her perfect man in the most unexpected place.

At thirty-five years old, travel writer Annalise is fed up with insensitive comments about being left on the shelf. She wants a relationship, but her busy career doesn’t leave her much time to meet men. Sexy liaisons with passing acquaintances give Annalise physical satisfaction, but she needs more than that – ideally a man who will satisfy her mind as well as her body. But where will she find someone like that? Things seem set to change when she meets Damien. He ticks all the boxes; he’s gorgeous, funny, and intelligent, and he shares Annalise’s love of books and travel. The trouble is, Damien’s shy and Annalise is terrified of rejection. Can they overcome their fears and admit their feelings, or is Annalise doomed to remain on the shelf?

Having pushed the ‘on’ button, Annalise moved the vibrator down between her parted legs and eased it inside her eager pussy. As the ears of the Rampant Rabbit slid into position on her clit, she groaned with pleasure and angled her hips, desperate to get more delicious friction. Then she pressed another button on the toy’s control panel to ramp up the power. As much as she’d prefer a slower build-up to her orgasm, she just didn’t have the time. She had to leave for the airport in a couple of hours, and she hadn’t even packed her case. A quick knee-trembler would have to suffice.

As the vibrator buzzed away between her thighs, Annalise closed her eyes and tried to empty her mind of everything but the pleasure she was experiencing. After a brief flirtation with the thought that she’d much prefer a hot man between her legs bringing her to orgasm, Annalise simply enjoyed the feeling of her impending climax. The busily-vibrating bunny ears pressed tightly against her sensitive flesh soon had her pussy fluttering. Then, without warning, Annalise was quickly yanked onto her pleasure plateau and immediately pushed off, leaving her writhing and shouting on the bed as a powerful orgasm overtook her body.

She arched her back as waves of bliss crashed over her, and her pussy clenched and grabbed at the toy’s shaft. Her swollen clit throbbed, suddenly much too sensitive for the vibrator’s unrelenting stimulation. She switched it off and pulled it out before dropping it to the mattress by her side, then gave a satisfied moan as she rode out the remainder of her climax. Finally, when the twitches and spasms had abated and her heart rate and breathing were almost back to normal, Annalise grabbed the Rabbit and rolled across to the side of her bed where the toy box was kept. She made short but thorough work of cleaning it, then reluctantly put it in its case, popped it into the small bedside cupboard, and shut the door.

No, it was much better off staying here. She could make do with her right hand for a few days. Even better, she might meet someone. Annalise smiled. She’d had some pretty steamy encounters on her travels over the years: the desk clerk in Dubai; the gym manager in Turkey; the waiter in Corfu…

Annalise shook herself. This wasn’t the time to let her mind wander down that path and get herself all worked up. She had to go and get ready now. There’d be plenty of time for daydreaming later, when she was in long and boring queues, and on the flight.

Just as she was about to head into the bathroom, Annalise’s landline phone rang. She retrieved the handset from its cradle on her bedside cabinet and glanced at the caller display before putting the phone to her ear.

“Hi, Mum,” she said, trying to keep the exasperation out of her voice. Her mother often called when she was short of time, and it was always a struggle to get her off the line without upsetting her. “You all right?”

“Yes, dear. I’m fine. Everything’s fine. I’m just calling to wish you a safe journey. Where is it you’re going this time?”

“Portugal. Lovely. I expect you’ll get a nice tan.”

Annalise rolled her eyes. She’d given up trying to explain to her parents that she wasn’t going off on free holidays all the time. It was work.

“I very highly recommend this book and give is 5 out of 5 stars. As always, Lucy Felthouse’s writing is superb, high-quality writing that is a cut above the rest! The story flows smoothly, the characters are likeable and real, and the romance is both hot and sweet. I loved Annalise’s story and I was rooting for her the whole way through. At 65 pages, this book is a nice length because it can easily be read in an evening, but it’s not too short. I was hooked from the very first page and read the whole thing in one sitting. If you’re looking for a sexy summer read, this one is delightfully entertaining.” Top Pick, The Romance Reviews

“Off the Shelf is a lovable romance between Annalise and Damien where these two characters are adults with grown-up hungers that elevate the sweet romance to a steamy level. There is no way to not adore this short story about a budding romance!” Grade A, BookingIt

“I thoroughly enjoyed this fast easy flowing read and at only 65 pages is perfect to grab some “me” time with. This is an adorable romance that ends in a super passionate sex scene built from the sexual tension that had been building beautifully throughout the story. I found Annalise so likeable it felt like I was watching a best friend having a romance with someone I knew; they felt so familiar. Lucy really brings these two characters to life making them completely real in your imagination; she adds the little things that we all do to make them familiar to us on print.. er…ok pixels.” Midnight Boudoir

“I went into this expecting to like it, but you know what, I loved it. The humour throughout this novella is simply fantastic, and something that is always present in Lucy’s writing but she really outdid herself in this one. The sexual tension is portrayed beautifully and the actual sex scenes are hot, hot, hot. And humorous, perfect combo, really. Read it, you won’t be disappointed!” Doris O’Connor

“This story turned out to be a really fun read! It wasn’t overloaded on sexual content, but there was definitely enough to keep it interesting! I really enjoyed Annalise and had fun on her trip through this story. Damien is also quite the treat, and in more ways than one! …when you are confronted with sexy Portuguese men who would normally light another fire for you, you can only focus on the one your heart desires. And that really made this story, and Annalise, special.” Fictional Candy

“This was an adorable journey of two people exploring an attraction that could mean so much more for them. It’s like reliving your first love as a teenager, but with an adult edge. It’s a sweet, sizzlingly sexy, and thoroughly enjoyable read!” Buffy Kennedy