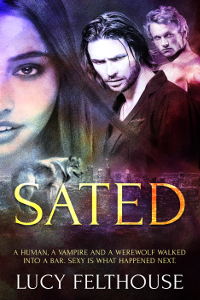 A human, a vampire and a werewolf walk into a bar. Sexy is what happens next.

Aneesa has an amazing sex life with her vampire boyfriend, Ace. He’s got skill, strength, stamina, and is incredibly adventurous. As a result, Aneesa is checking things off her sexual bucket list at a rate of knots. However, one item on that list remains out of reach… or does it?

Will Aneesa check off her ultimate sexual bucket list item, or will her lust remain unsated?

Please note: This book has been previously published and has been re-edited.

A human, a vampire and a werewolf walked into a bar. Sounds like the start of a bad joke. I can assure you it isn’t. And telling you that, actually, the human and the vampire walked into the bar together, and found the werewolf already there, probably doesn’t make it sound any better. Well tough, because that’s the way it went down.

Ace and I met at a Halloween fancy dress party. I know, I know—cliché of clichés. And yes, he was dressed as a vampire—albeit a horrendously exaggerated one—all slicked-back hair, über pale skin and visible fangs. In real life, he actually looks no different to you or I. Okay, he is a bit pale. But at the time, I’d laughed at him and asked if he thought vampires weren’t a bit overdone—it was when Twilight was at the height of its popularity—all angsty teens and stalkerish behaviour.

He’d laughed right back, a joyous, melodious sound that had heat pooling in my groin—then as suddenly as it had arrived, his mirth disappeared. Then he’d said, “Overdone or not, we’re here to stay. And I don’t fucking sparkle.”

My heart pounded, and my mouth went dry. Somehow, I’d known he wasn’t joking. And, although my conscious brain had shut down, my subconscious had had my back, because I’d heard myself say, “Well, thank fuck for that, because I’ve never been a fan of glitter.”

He’d laughed again, the sound tugging at my very core. And—apologies for yet another cliché—we’ve been together ever since.

Several years later and we’re still as madly in love as ever, and still fucking like rabbits. Sex with a vampire is everything you’d expect it to be—energetic, powerful, finessed, mind-blowing and packed with stamina. Providing you can keep up, that is.

And yet, our latest adventure was the most exciting yet. You see, after mine and Ace’s initial meeting, I was given an almighty education in everything it meant to be a vampire. Myths were dispelled, other beliefs were confirmed—he definitely didn’t sparkle—and yet more things I’d never even thought of were seared into my brain.

So when Ace announced he had a friend who was a werewolf, I didn’t even bat an eyelid. It was the follow up information that surprised me.

“He wants to what?” The tone of my voice by the end of the sentence was so high probably only dogs could hear me. And yet it was genuine surprise, rather than disapproval, that fuelled my reaction.

Raising his eyebrows, Ace gave me that sexy smirk that always gets my blood pounding through my veins and my pussy aching to be filled. “You heard me, Aneesa. My friend Barton would like to screw you. With me present, of course, and actively taking part.”

“A th-threesome?” I stumbled over the word—not because I was horrified. Quite the opposite, in fact. Being fucked by two hot guys at once had long been on my sexual bucket list—a list that, since meeting Ace, had had items checked off it at a rate of knots. I was going to have to start thinking of some more shit to put on it. I was way too young to have completed my bucket list—sexual or not—for Christ’s sake!

“Aneesa was a fun, flirty, adventurous character who also tried to use her brain and be smart and responsible about having her fantasy fulfilled. This story is a fast read, but it was fun, smoking hot, full sex.” 4 out of 5, The TBR Pile

“I’ve stumbled into reading quite a few menage books lately and Sated by Lucy Felthouse is I think my favorite. This is my first read by this author and if if this book is any indication of her writing style, it’s not going to be the last. Hot, sexy and peppered with giggly moments…” 4 out of 5, The Jeep Diva

“Well, the three of them together was totally hot… Sated is a fun and sexy quick read.” 4 out of 5, Love Bites and Silk Ties

“If you’re looking for quick read full of sexy characters and a hot ménage between a vampire, human, and werewolf, then this is the book for you! Things get very steamy very quickly and it doesn’t end the way you would imagine. My only problem with this story is that I wanted more!” 4 out of 5, Crystal’s Many Reviewers