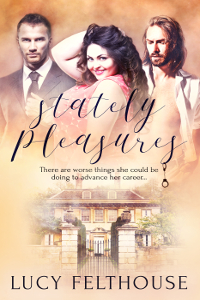 Note: Stately Pleasures has been previously published. This version has been re-edited.

Alice took a deep breath, in through her nose, and out through her mouth. Repeated the process once more. Then, realising she could sit there all day doing it and not feel any calmer, she forced herself to step out of the car and close and lock the door.

She bent to peer into the wing mirror of the vehicle and checked her hair and make-up. Satisfied, she straightened, then turned on her heel and walked quickly across the driveway to the great house before her nerve failed her.

Davenport Manor was currently open for visitors, so she walked in through the front door and was met by a smiling elderly lady.

“Can I help you?” the woman asked kindly.

“Yes, of course,” the woman replied, “that’s today, isn’t it? Follow me; I’ll take you to Mr Davenport’s office. But just hang on one second.”

She ducked through the doorway into the next room and spoke with her colleague. Alice guessed she was letting her co-worker know she’d be gone for a few minutes. A few seconds later, she was back. “Okay, follow me, Miss…”

“Brown,” Alice said, then fell in behind the other woman as she led her to Mr Davenport’s office, and the interview that could change her life forever. It was hardly surprising that she was shaking like a leaf.

Alice quickly became disorientated as their journey took several twists and turns along dim corridors—their blinds drawn to protect paintings, tapestries, and furniture from the sunlight—and up a flight of stairs. She had a few seconds to worry about finding her way if she was lucky enough to get the job, then her guide stopped outside a door and turned around.

Alice smiled and thanked the elderly woman, then smoothed down her skirt, which also conveniently wiped the nervous sweat off her hands. She stood up straight, gave herself a mental pep talk about being more than qualified for the role, and knocked on the door.

Alice knew that voice could only belong to Jeremy Davenport. The posh accent, and the fact he’d said “enter” instead of “come in”, screamed money and an upper-class upbringing. Alice was suddenly desperately aware of her broad Midlands accent and lowly background, despite the fact she’d worked her backside off to get into a decent university in order to gain a Bachelor of Arts degree and then a Master’s degree. No matter what she sounded like, or what her past was, she had all the skills necessary to do the job she was about to be interviewed for.

She realised she’d left rather a long pause before opening the door, and turned the handle before the occupants of the room thought they were about to interview some kind of simpleton who couldn’t follow a simple instruction.

Fixing a polite—but hopefully not inane—smile onto her face, Alice stepped into Jeremy Davenport’s office. Her first thought—which certainly did nothing to help her nerves—was good God, he’s hot.

“…a sizzling menage tale that is a fun read even as it is wonderful to watch Alice realize that she is valued for herself and that she doesn’t need to be ashamed of her voluptuous figure. An enjoyable story that gives an interesting view of life on a remarkable estate.” 4 out of 5, Night Owl Reviews

“The pleasure was all mine. This book was HOT! This story is MEGA HOT! I mean seriously my dreams tonight are going to be off the charts. This is a must read, take a look and see what happens to Alice, it will have you squirming. I am now off to see what else Lucy Felthouse has written because well quite frankly, I want MORE.” 5 out of 5, Jo&Isalovebooks

“The author brings the story to life with vivid images, intense details and strong and compelling characters that are easily related to. The chemistry between the three radiates heat from every page and the frequent sex scenes are hot and steamy… a stimulating and entertaining read.” 4 out of 5, The Jeep Diva

“Stately Pleasures delivers on its promises and is a very sexy read. In the end, I did want to spend more time with this menage. I recommend this one to anyone looking for good, straightforward erotica.” 4 out of 5, To Each Their Own Reviews

“…hot hot hot! Yes, cold-shower hot! The scenes were original, the description was amazing… a well crafted erotica read, that gave a romantic soul like myself a special present, by giving me a good HEA at the end. I would recommend this book to menage readers and to those that love to get a bit of a kinky ride.” 4 out of 5, More Books Than Livros Reviews

“I am still drinking cold water from the scene in the… well all of the scenes actually. I enjoyed this book very much… it clearly tapped into some cosmic collective unconscious that knew my buttons and how to push them.” Ali Crean

“…the sex is hot, hot, hot, with some kink and a little SM. Well worth the read especially if you like menage with hunky men in a beautiful mansion.” We Love Kink

“I really enjoyed this story – Alice is a likeable and focused heroine who is fun loving and realistic. Jeremy and Ethan will make you swoon: Jeremy’s dark hair and blue eyes, while Ethan is all brown, longish hair and green eyes. They both will raise your heart rate and make you wish you’d tried a threeway! …a very fun, very very sexy story. I genuinely liked the characters and enjoyed their interactions with each other. It should come with a warning – it is seriously hot!” I Love Romantic Fiction

“I was very soon invested in their unorthodox relationship and wanted to see it work, desiring a HEA for the three of them. I also liked he fact that although Alice was submissive when it came to sex that equality reigned elsewhere in their relationship and the men never forced her to do anything she did not want them to do – that’s not to say that their sexual proclivities did not take her by surprise and tested and expanded her limits! This is an excellent read for lovers of erotic romance who appreciate the dynamics of a loving ménage.” 5 out of 5, A Reader’s Review

“This is a very sexy story, so if you’re not into sexy stories with a little bit of kink, this may not work for you. Overall an enjoyable and fun read, and a great diversion on a rainy afternoon.” Deanna’s World