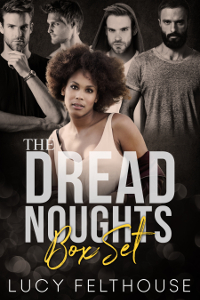 Can Kim and her gang of ex-military men win a dangerous race against time in order to deliver a project that could prevent a climate catastrophe? Find out in The Dreadnoughts box set.

Contains the complete series, all three books for the price of two—Search and Rescue, Cut and Run, and Safe and Sound.

Kim’s trying to save the world—but is she actually going to make things worse?

Kim Medhurst is an ex-British military intelligence officer turned scientist and climate activist. A thrilling, potentially world-changing discovery leads her to a cave on a remote island off the Scottish coast. But before she can return to the mainland, a natural disaster traps her in the cave with limited food and water. Fortunately, she is an intelligent and resourceful woman who made a backup plan even before she stepped out of her own front door.

Enter Jason Chastain—owner and operator of a private security firm—and his friends Aidan Smith and twins Taylor and Joshua Greig. The foursome are also ex-military, so rescuing Kim should be a walk in the park for them. However, her discovery is so top secret she hasn’t even told Chastain and his buddies precisely what their mission is—instead relying on money and intrigue to get them to do the job. It works, until a series of events turn the rescue mission into an escape mission. Throw in a further revelation that will change all of their lives irrevocably and Kim begins to wonder if she’s bitten off more than she can chew.

Should she have left things well alone, or can this colossal mess be turned into something positive? This is about so much more than just five human beings, after all.

Kim’s on track to save the world—but will she pay with her life?

Kim Medhurst, ex-British military intelligence officer turned scientist and climate activist, has a vitally important project on her hands. The mysterious object she set out to retrieve from the remote Scottish island has the potential to power the entire planet. All she needs to do is figure out exactly how to make it happen, and the Scottish Highlands seems the perfect place to complete her research in peace—as well as enjoy the company of the gorgeous Greig twins.

Unfortunately, things aren’t that simple. Someone knows what Kim’s up to and wants to get their hands on her and the object she now calls the ygrene. As if that wasn’t concerning enough, Chastain goes missing, spurring Kim and the others into action. The team’s newfound abilities come in handy as they attempt to find their friend and navigate the murky underworld of dirty energy and those who profit from it.

But, even with their powers, will they be a match for a greedy megalomaniac with no morals?

Kim is within touching distance of her goal – but is it already too late?

Kim Medhurst, ex-British military intelligence officer turned scientist and climate activist, is in a race against time. With help from her four men, she’s researching how to make the ygrene – the mysterious power source she retrieved from a remote Scottish island – a viable alternative to fossil fuel. An unexpected visitor recently bought them a little extra breathing space, but they’re painfully aware it won’t last forever.

Despite their hard work, the whole thing looks set to crash down around their ears when the greedy megalomaniac they’ve been desperate to avoid shows up on the Greig twins’ doorstep. While Kim and the gang would happily lay down their lives to stop the ygrene getting into the wrong hands, Kim would prefer to steer clear of violence. Their latest visitor claims he only wants to talk, but he’s brought goons carrying hardware, and Kim wouldn’t be Kim without a backup plan.

Will good prevail against evil, or have all the gang’s efforts and sacrifices been for nothing?

Kim gaped at the phone in Taylor’s hand, mouth dry and heart pounding. While she’d fully expected Orlov’s men to show up on Jota’s doorstep at some point, she hadn’t expected the man would send his own son. Or that the son in question, rather than attempting to storm the gates or trying to get in some other way, would simply mooch up, cool as a cucumber, and press the intercom button.

Shock and confusion rendered her incapable of deciding whether Maxim Orlov’s polite and very ordinary arrival was a good thing or a bad thing. On the one hand, perhaps it meant aggravation and violence were off the table. Maybe discussions and negotiations would be the name of the game instead. God, I hope so. Just because they were ready for and capable of aggravation and violence didn’t mean that was what they wanted. Though it would be a departure from Orlov Senior’s usual form, judging from recent experience.

On the other hand, however, it was possible Maxim Orlov being at the gates was a distraction tactic. The suspicious part of her mind envisioned his goons leaping fences, forcing their way through hedgerows, hustling through the woods, weapons at the ready and drawing ever closer to the house. No, she reminded herself. While the leaping fences and forcing their way through hedgerows weren’t outside the bounds of possibility, if anyone was in the woods, she’d know about it by now, weapons or not. So either the goons remained outside the perimeter of their security measures, or they weren’t here at all.

Chastain clearly had no such doubts. The instant Orlov Junior had introduced himself, Chastain had immediately shoved tactical vests at everyone before slipping into his own. Now he was poised for action, his lips set into a grim line.

The others had put on their vests. All except for Taylor who, to his credit, remained calm as he spoke into his phone, “Aye. I’m aware o’ him. How can I help ye?”

There came a pause, then, “I would rather not discuss this while I am standing out here. May I come inside and talk with you, please?” Orlov, too, remained calm, though she detected a smidgen of frustration in his tone.

The five of them exchanged glances. Kim picked up a ‘hell, no’ vibe from Chastain, Smith and Joshua. Once again, Taylor was the outlier. The difference, of course, being that he could see Orlov on the camera. She slipped into the vest Chastain had handed her, then retrieved her phone and pulled up the relevant feed.

Immediately, it became clear Orlov was alone at the gates. He looked around their age—mid-to-late thirties—was dressed ordinarily and, while it was possible he had a weapon or weapons secreted about his person, he certainly wasn’t standing there ready to unleash hell on them. His body language was pretty relaxed, too. So he was either a superb actor or was genuinely here just to talk. Maybe, just maybe, diplomacy could resolve this situation. Stranger things had happened, after all.

She flicked to the other camera on the lane and soon had eyes on what had to be the man’s method of transport. A sleek, dark-coloured Mercedes sat at the mouth of the lane—possibly he hadn’t wanted to bring the expensive vehicle onto the gravel and risk the stones flipping up and damaging his paintwork. But then, what were a few chips or dings to a man with the money he had access to? He could buy a whole new car without noticing the difference to his bank account, never mind worrying about what a repair bill would cost.

Unfortunately, it had been long enough since Orlov had passed the motion sensor that the light at the end of the lane had switched off again, meaning all Kim was left with was the camera’s night vision capability. Despite the high-end technology, she couldn’t make out whether anyone was in the rear of the vehicle or not—it would have been difficult enough with ordinary windows, but the fact they were blacked out made it impossible. But she couldn’t see anyone in the front either, which suggested Orlov didn’t have a driver with him—he’d made this particular journey by himself. Or he’d driven the vehicle, anyway—there was a chance he was the driver, and perhaps his father was in the back of the luxury Mercedes, poised for the next stage of his dastardly plan. Kim rolled her eyes at her own wayward thoughts. He’s not a bloody Scooby Doo villain. This is real life, not a sodding cartoon. She locked her phone and shoved the device back in her pocket.

“One moment, please,” Taylor said, then tapped the screen, presumably to shut off contact with the intercom so Orlov couldn’t hear their conversation. He donned his tactical vest, then swept his gaze over each of them, before letting it land on Kim and stay there. “Well, what do ye all think? Far as I can tell, the wee fella’s alone and unarmed, and he doesnae look as though he’s here fer nefarious reasons, but we cannae be too careful.” He paused, looked back at Smith, then sniggered. “All right, I take it back. Maybe we can be too careful—a bulletproof man wearing a bulletproof vest is a wee bit of overkill, isnae it? Bloody hell, mate!”