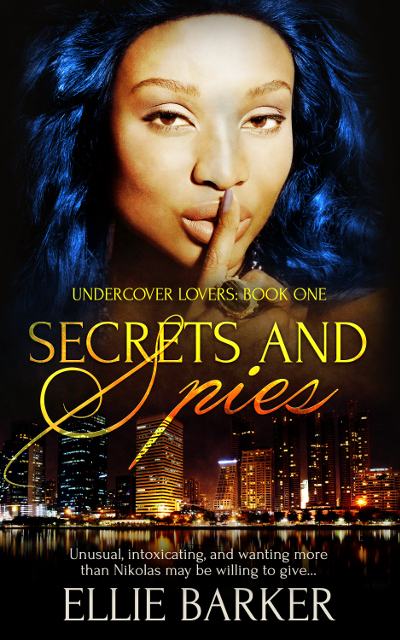 Starting life as Miss Blue Hair, a short piece from Sinful Press’s Sinful Pleasures anthology, Secrets and Spies follows the story of Nikolas, a bisexual police mole, and Sky, a transgender thief, as they work to infiltrate the local crime syndicate. Ellie Barker has created a fast paced and highly entertaining trilogy, with a diverse range of characters, various sexual encounters, and unconventional romance. In Bed with the Enemy and For Queen and Country, the remaining books in the trilogy, are due for release on June 15th and July 13th respectively.

Secrets and Spies is Amazon exclusive for a limited time before being released across all main platforms. It is available to read through Kindle Unlimited.

When Nikolas Jinsen, police mole, meets an unusual woman named Sky, he thinks he’s just in for a night of pleasure. But he’s soon pulled into a world of mafia dealings, stolen documents, hacked computers and kidnappings – not to mention a woman with a taste for exhibition, a Queen who demands payment in pleasure, and Sky herself; unusual, intoxicating, and wanting more than Nikolas may be willing to give.

Secrets and Spies is transgender erotica at its best.

She’d undressed, and I was admiring her from behind, enjoying the faint curve of her hips and her definitely gropeable buttocks…I might have tested that on the way home. But it was as she stepped back and raised her arms above her head, lifting her bright blue hair, that I realised I’d seen her before.

She’d had shorter hair, then, as black as night. She’d been dressed in practical trousers and a t-shirt, and carrying a bag full of tools; an electrician’s apprentice, fixing lights in an office building. They’d been in and out before anyone had realised some rather valuable documents had been copied and somehow removed from the building despite the security.

I’d idly wondered if the maintenance crew I’d walked past had been involved. After all, it wasn’t a dissimilar cover to one that I’d occasionally employed for jobs…

Sky. Thief, seductress, gambler and heartbreaker. This slim, dark-eyed thing in my bed was that legend.

Well, I can’t refuse a chance to fuck a legend. I’d just have to discuss her previous activities with her when we’d finished this business.

That train of thought came to a very nice conclusion as she turned to me, lifting her arms and stretching, taking my open mouth and caught breath as appreciation. “Lost for words?”

I managed a smile. “I’ve never been one for talking when I could express my appreciation in…other ways.”

She fitted perfectly across my hips, her strong legs pressing on my thighs. I felt her cock slide against my stomach, leaving a wet trail in contrast to the warmth of the smooth skin. Her mouth pressed onto mine as I pulled her closer, and we spent a while like that, chests pushed together and skin sliding as my hands explored her body and her tongue teased mine, her long fingers winding into my hair.

“All right, enough,” I said when it got too distracting, pushing her shoulders back a little to get some distance. “I want in you.”

You can find out more about Ellie over at http://elliebarker.co.uk/, or follow her on Twitter as @EllieBa3