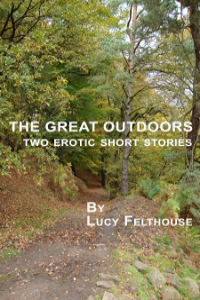 Whether you love or loathe the great outdoors – these stories will get you hot under the collar! (Also available now, The Great Outdoors Vol 2)

In Bird’s Eye View – the main character gets more than she bargained for when she heads out for a walk.

In Fun in the Forest, a dull team-building exercise suddenly takes a turn for the better for Anna.

Peace, quiet and beautiful countryside. Bliss. Karla thought. The ebb and flow of the water below lulled Karla into a sort of trance. Her mind was clear and she felt truly chilled out as the listened to the birds calling to one another up above.

Which just made her all the more unprepared for what happened next. She heard the crunch of leaves below, whispers and hushed giggles. Thinking perhaps it was the children she’d seen with their parents earlier, Karla glanced down subtly so as not to betray her position. However, her guess had been wrong. It wasn’t children at all. It was a young couple hurrying into the trees, apparently full of mirth.

Thinking perhaps one of them needed to answer a call of nature, Karla opened her mouth to announce her presence and avoid embarrassment all round. But before she could make a sound the young man opened his fly and pulled out his semi-erect cock. Sucking in a breath ready to shout, Karla was again too late as in an instant the young woman was on her knees in the dirt and taking her lover’s prick into her mouth.
Now Karla was truly dumbfounded. Here she was, relaxing after a busy week at work and trying to forget her troubles – or rather lack of them – with the opposite sex, when suddenly a live sex show was playing out in front of her!

“The writing is sexy and fun, bringing the whole scene to life. If you enjoy erotica that is well-written, steamy and satisfying you will adore Lucy Felthouse.” Ashley Lister

“This lovely book contains two fantastic stories that draw you in from the very start.

Bird’s Eye View takes you along with Karla as she witnesses a couple enjoying much more than the view in the woods, while Fun In The Forest describes what happens when Anna gets bored on a team building weekend and gets sidetracked into a hut in the middle of the wilds of Scotland.

Both of these stories are gloriously naughty, and Lucy’s brilliant and realistic style draws you completely into the characters heads to experience everything first hand.

A must read for anyone who has ever thought about outdoor loving!” Lexie Bay