A “Those Boys” Backstage Pass by Alison Tyler (@alisontyler) 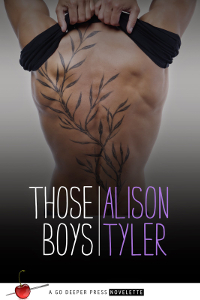 “Those Boys” is the sequel to a “novelette” I wrote for Go Deeper Press called “Those Girls.” (Currently, I’m going a little Star Wars and writing the prequel, a full-length novel called “Those Days.”)

But right now, I thought I’d hand you a backstage pass and slip you behind the scenes on “Those Boys.” In the story, I mention a few specific items:

The dressing room door opened and a silver-haired man stepped out. I was leaning across the counter, talking shop with Elizabeth, when the man pranced by us, a pretty, pretty pony. He had that shimmering mane of shoulder-length hair, obviously a premature gray because his face was young and unlined. Before he spoke, I had him summed up neatly. He was one of those boys. Those “I like my hair” boys. Those “I need your approval of my outfit, and it will take me six hours to choose a shirt” boys.

In my mind, the unique shirts that Rem is shopping for are by Rockmount. And they’re not just any Rockmounts, but the Vintage Western Shirts. You can check out the variety on my brand-new “Those Boys” Pinterest page.

“Safe word,” I said again, “one you’ll be able to remember.”

His eyelashes fluttered. He looked wildly around the room. What was he thinking? Window. Chair. Black. Rug. Girl. I came closer to the bed. I bent and whispered five-dollar words to him. “Narcissist. Peacock. Pretty boy. Preener.”

“Peacock,” he selected, and I couldn’t help myself. I looked over at Vanessa and grinned at her. She had her back pressed against the wall. That dangerously sheer dress of hers did nothing to hide her perfect form, did nothing to offer her protection. But I could tell that she felt invincible with the dress on, especially in comparison to the naked and captured boy on the bed.

The dress worn by Vanessa apparently doesn’t exist in real life—trust me, I’ve looked—but you’ll find one on my board from All Saints.

I’m going to say right now that the boy delighted me. All his sub attitude was gone when he was on the stage. Yes, he preened, as I had known he would. He tiptoed along the edge of the stage. He shimmied. He swiveled. He catwalked in those tight black jeans. The crowd adored him. I could imagine how easy he’d have it, snagging up girls to take home, tying them down however they wanted him to. He looked like he could make your wickedest, filthy dreams come true.

Vanessa danced in front of me, ever so gently rubbing her body against mine to the music. I let her, not caring that she had me hard, that she was doing her best to get a rise from me. I wanted to swallow the show. I wanted to devour Rem whole.

After the concert, we went to the dressing room. Rem was in his black jeans, no shirt, sweat still covering his torso. He didn’t look surprised to see us. He didn’t look frightened. He looked as if he needed me. I live for that look.

Rem’s band in my head was drawn from a mix of a few different musical groups, but influenced definitely by the performers at Rene and Arlene’s engagement party on True Blood mixed with a long defunct rock-a-billy band I was acquainted with back in the day. (And when I say “acquainted,” I mean, yes, I did make-out with the lead singer.)

I’ll be posting more images as the “Those Boys” tour continues. Please stop by my blog for the line-up. And hey, shouldn’t dream-shopping guides always be this much kinky fun?