It’s my pleasure to welcome Harper Bliss to my site today to talk about her fabulous story in Smut in the City.

First of all, thank you Lucy for having me over on your blog. It’s a great honour for me, just as it is an honour to have a story in Smut in the City amongst a whole slew of fabulous writers (still pinching myself). Today I will enlighten you on the inspiration behind my story in Smut in the City, which is called Neighbours and is set in Hong Kong.

Two aspects of the story are drawn from real life. I’ve lived in Hong Kong for the past two years (it’s as crazy as it looks) and the premise of being able to see your neighbours in the shower… Unfortunately, in my case, the only person I ever saw showering in the building opposite mine was a chunky Chinese man, but that’s what fiction is for, of course.

Just to give you an idea, this is the proximity we’re talking about. I took this picture from my balcony. 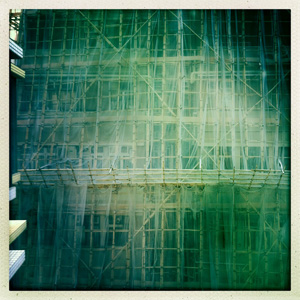 As you can see, it’s all wrapped up in bamboo scaffolding (yeah, I had to get used to that as well when I first arrived) at the moment, but here’s another shot of the concrete jungle I live in. 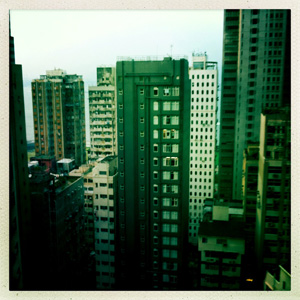 Space is the number one luxury in Hong Kong. Personally, thinking of the price per square foot depresses the hell out of me so I try to focus on the positives. In an environment like this, where everyone is literally packed together, you simply can’t help but peep into someone’s living room now and again. When I noticed the call for submissions for an anthology called Smut in the City a loud alarm went off in my head. I live in the New York of the East, with its brazen neon lights and 24-hour lifestyle it’s a far cry from the provincial town I hail from. I just had to write a smutty city story. Hong Kong has made a big impression on me and choosing it as the location for some soapy F/F erotica makes it all the more fun.

Here’s an excerpt from my story Neighbours:

One night, on her tiny balcony, when searching for the harbour in between the skyscrapers obstructing an open view, her gaze had drifted to the apartment building on the left. It was the usual grey affair with a yellow glow beaming through the windows, creating a scattered pattern of city light. From the shower heads towering over plastic curtains she’d learned she was watching a column of bathrooms. Except, on the twelfth floor—at least she guessed it was the same floor as hers—the person in the process of showering obviously didn’t believe in curtains. At first, it didn’t fully register, but as her eyes grew wider and her mouth curled into a smile, Karen had realised she was witnessing quite the revealing shower scene.

The woman on the other side of the window, which wasn’t even matted, lathered soap over her arms, producing white frothy bubbles that stood out against her olive skin. Karen deemed it impossible for the woman not to know that she was on display. The easy conclusion was that she must really enjoy it. At least four other buildings had windows or balconies facing her bathroom. Hundreds of eyes could feast on the way the foam was slipping off the woman’s skin right now. Karen had checked her watch. It was just past eight, around the time half of professional Hong Kong arrived home from work. Apart from an exhibitionist streak, the woman also had excellent timing.

Karen had soon learned that the showering woman was a recurring phenomenon and she found herself drawn to her balcony every time she stepped inside her flat. Some nights, after a rough day in the office dealing with incompetent suppliers, she’d rush home instead of going for the usual after work drinks with her colleague Andy, and could only relax with a glass of wine on her balcony, eyes glued to the illuminated window across from her. Once, when stuck in traffic after a gruelling meeting, she’d gotten out of the cab and half-jogged home to make it in time for the show. She wasn’t exactly proud of it, but Karen felt that her own vices were easily eradicated by the woman’s.

Thanks again for having me, Lucy!